On June 22, 1941 Adolf Hitler unleashed Operation Barbarossa against the Soviet Union.  The Germans surprised the Russians who suffered enormous casualties and retreated into the interior.  The Russians had been warned by the British of Nazi intentions, but Joseph Stalin ignored the British, reasoning that London wanted to create another front in its war against Germany.  Stalin did expect Hitler to break the Nazi-Soviet Pact of August, 1939 but he believed he had more time to prepare.  Stalin was in such shock as German troops marched through Russia that he disappeared for ten days, probably fearing that why would the Russian people support a murdering dictator, but the reality was that Stalin, was their murdering dictator and Hitler was not!  The support for Stalin and the “Russian Motherland” emerges in Helen Dunmore’s novel, THE SIEGE which takes place during the siege of Leningrad that lasted from September 1941 to 1944.  As New York Times reporter, Harrison Salisbury labeled the events in Leningrad, “The 900 Days,” the title of his book about the city that suffered the death of over 650,000 people.  Dunmore’s novel provides insight into the lives of every day Russians as they struggled through starvation, fear of German artillery shells and bombs, the lack of any bureaucratic relief by city officials, and the constant paranoia that they could not trust their own government.  The reader is presented with a number of characters; the family of Anna, her younger brother Kolya who she raises after her mother died in child birth, and her father Mikhail, a writer and poet who has been rejected by the Soviet Writers Union because he has not adapted to the tenets of socialist realism, and Marina, an aging actress who comes to live with them.  We are also exposed to Andrei; a young doctor who reports the horrors of the siege from Leningrad’s remaining hospitals, and other characters like Dimitri Pavlov, who is sent from Moscow to address the city’s food shortages.  Pavlov realizes that Leningrad, a city mostly of islands, similar to Stockholm, is now a “stone island,” and “has got to depend upon its own resources” to survive. (198)  what are those negligible resources?  A government ukase suggests the nutritional value of wallpaper paste that once boiled can provide sustenance for those who are starving. 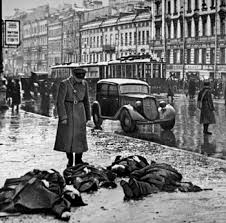 (Images of Leningrad during the siege by Nazi Germany)

The story is set when Mikhail’s wife Vera dies in childbirth, thrusting motherhood on her daughter Anna before the German invasion.  The paranoia of Stalin’s Russia before the arrival of the Germans is readily apparent from the outset of the book.  Anna, a nursery school teacher assistant, fears raising her voice at work as Kolya is play acting the Russian Civil War between the White and Red soldiers because she might be heard by her boss who she fears will denounce her.  The Great Terror of the 1930s is in the air as it seems everyone is afraid that someone will denounce them to the authorities.  Stalin has warned his people that “wreckers, traitors, enemies, and saboteurs….had infiltrated the Party itself, and were among the elite, masking themselves as irreproachable Party activists and committee members.  But how could you ever prove it wasn’t a mask, Anna wonders.  Only by ripping off your own flesh…” (21)

Dunmore provides a description of how Leningraders attempted to deal with the German advance through Anna’s eyes as she works on digging trenches and tank traps.  The bombing of food warehouses and Leningrad’s geographical isolation make any defensive preparations useless in dealing with the siege.   Leningrad’s citizens are urbanites who only know how to forage for food by queuing up at food centers, not by using what the earth provides.  One might ask why Leningraders were able to survive as well as they did, probably because they had experience of starvation in the 1930s when Stalin’s collectivization policies created the lack of food.  In a way Stalinist agricultural policies might be considered somewhat normal in the minds of Soviet citizens. The queuing before the war for food and goods created a mentality that was put to good use during the siege and created the false hope that food would soon be available.  Leningrad’s main problem was its “impossible arithmetic” for a city with 3.5 million people with little food resources other than wallpaper paste and boiling leather to obtain fluid to make soup.  Leningrad is a city of “a million flailing hands” as people constantly reach for food. (146)

To best understand Leningrad’s plight I would recommend that the reader place a map of Leningrad in front of them to understand how difficult it was to supply the city.  Lake Ladoga to the east was useful once it froze during the winter months, but the Germans made it very hazardous for any truck convoys as they continued to bomb the ice.  The result is the grim process of the black market that Anna has to deal with to obtain anything.  People become animals as they try to survive.  In a way the best means of survival is sleep because it provides an escape from hunger. As Anna points out “you should never wake anyone once they’ve gotten away, deep into their dreams, where there is food.” (189)

The relationship between Anna and Andrei is a tender one that is developed nicely by the author.  Considering the conditions one would think that love would have difficulty flourishing, but in this instance Anna and Andrei’s needs are such that their relationship becomes a life line for survival.  Having survived the winter of 1941-1942, Leningraders were greeted by spring and improved food rations and supplies.  Dunmore describes the scenes of people planting vegetables in city parks and the optimism that those who were still alive would survive the German siege.  Dunmore leaves the reader in the spring of 1942, but for the remaining population of Leningrad the war would continue for two more years.  If you find the time to read THE SIEGE, Dunmore’s sequel THE BETRAYAL will not disappoint.  If you are interested in the history of the siege of Leningrad I would recommend Michael Jones’ LENINGRAD: STATE OF SIEGE.