(Images from the Bosnian Serb siege of Sarajevo in 1995)

For the past few years numerous books have been published dealing with aspects of the First World War. The plethora of books is due to the 100th anniversary of the assassination of Archduke Franz Ferdinand, the heir to the throne of the Austro-Hungarian Empire that touched off events that resulted in the “war to end all wars.”  Tim Butcher’s THE TRIGGER is part of slew of new publications, but it is not a traditional discussion of the causes of the war and who was most responsible for the debacle that followed.  Butcher’s book is hard to categorize.  It is part travelogue through the battlefields of the Yugoslavian Civil War that dominated the 1990s in the Balkans.  It is also a book that tries to explain how the assassination of Archduke Franz Ferdinand by a Serbian nationalist named Gavrilo Princip resulted in the death of millions of people between 1914 and 1918 might be related to the slaughter that took place in Bosnia between 1992-1996.  The subtitle of the book, “Hunting the Assassin Who Brought the World to War,” hints at what the author was trying to achieve.  By presenting a pseudo biography of Princip and following his route from his village in Serbia to Sarajevo the author uncovers new information that previous biographers and historians of World War I failed to uncover.  The reader is placed in a position to understand the events that led to the assassination, and by walking Princip’s route we get an insight as to how the events of 1914 still affected the Balkan region through the 1990s when Butcher was a journalist in the region.  As the author follows in Princip’s footsteps he relives the tragic events of the 1990s he witnessed, and in writing THE TRIGGER, Butcher provides a rare glimpse into mind set of Princip as well as Serbian nationalists who conducted the genocide that was Srebrenica in 1995.  The first of two strands in the narrative are Butcher’s journey that culminates with the Bosnian Serb massacre at Srebrenica that finally brought in NATO forces leading to peace talks resulting in the Dayton Accords.  The second strand sees Butcher describe Princip’s assassination of Franz Ferdinand on June 28, 1914, the hunt for co-conspirators, the trial that followed, and the death of Princip in 1918.

What make Butcher’s work so fascinating are the important insights he brings to the table.  The author was a foreign correspondent who covered the war from 1994 onward and sees his role in part to remind people how the events of World War I are still responsible for much of today’s world conflict.  Butcher points out that most histories of the war cover the same ground, and he decided by returning to Bosnia he could follow Princip’s path, “trekking where he trekked, from village to village…..explore the Balkan towns and cities where he studied, worked and travelled, and….piece together as far as possible the setting and detail of the assassination, his influences and motivations.” (20)  To a large degree Butcher is able to meet his own criteria in creating an interesting narrative that should keep the reader fully absorbed from first page to last.

Butcher’s journey led him through the forbidden mountainous areas that were home to bears, wolves, and a significant number of unexploded mines from the Yugoslav Civil War.  Butcher was familiar with the areas he traveled because of his journalistic work in the 1990s and he marched onward with the assistance of his guide Arne Hecimovic, a man who spent his teenage years translating for reporters during the civil war.  The journey began in the small Serbian village of Obljaj where Princip was born and preceded across Serbia into Bosnia, a return to Belgrade and a later march to Sarajevo.  As Butcher describes the journey he integrates the relevant history that affected the region.  The author goes back into Ottoman history and describes their rule in the Balkans, as the Ottoman Empire becomes “the sick man of Europe” in the 19th century, Butcher continues by addressing the significance of the 1878 Treaty of Berlin that created Serbia and which many historians argue put Europe on the road to war.  Butcher describes the decade that preceded World War I highlighting the dynastic issues relating to the Austro-Hungarian monarchy, the annexation of Bosnia and Herzegovina in 1908 by the Habsburgs, the Balkan Wars of 1912 and 1913 all in the context of the development of Princip’s sense of growing nationalism.  We see how nationalism became a disease in the 20th century and the damage it caused.  Once Yugoslavia is created after the Treaty of Versailles it is obvious the only way to keep the new nation together is with an iron fist.  We witness the fracturing of Yugoslavia as it is ripped apart by the Nazis who play divide and conquer splitting the catholic Croat population from the eastern orthodox Serbs, and Muslims who are remnants of Ottoman rule.  Following the war Jozip Broz Tito and his communist partisans who had liberated his country from the Nazis assumes power and applies a high degree of force to keep his nation together until his death in 1980.  From that point on it seems inevitable that the ethnic rivalries and hatreds that were subsumed for years overwhelms any sense of Yugoslav unity and in 1991 the road to civil war and the violence that tore apart the Balkans is under way.

What I found most interesting about the book was Butcher’s discussion of Princip’s belief system.  Historians have painted him as a Serbian nationalist who operated under the nationalist group, the Black Hand.  After significant research Butcher comes to the conclusion that Princip was a “not predominately committed to Serb nationalism.  His greater goal was freeing all Slavs, not just ethnic Slavs like himself,” his belief system centered around the greater Yugoslav ideal of defeating Austro-Hungarian colonialism, not just from Bosnia, but also “from areas to the north where other south Slavs – Croats and the Slovenes – were under the same occupation.” (247-8) Princip belonged to Mlada Bosna, a group that was not typical of nationalist movements in the Balkans in that they were “more romantic, inclusive” and believed in a political model that was far different from the “individual nationalist models of Serbs or the Croats.” (250)  Princip saw the poverty and that the basic feudal system remained under the Habsburg Empire and he wanted to free the southern Slavs from their control.

As Butcher’s travels take him through the route employed by Princip he revisits the civil war he covered.  He constantly comes across unmarked graves, underground bunkers, earthworks, and the destruction that was endemic to the fighting.  Butcher explains the shifting alliances that existed in the 1990s; Bosnian Serbs against Bosnian Croats allied with Bosnian Muslims.  Then the Croats and Moslems allow their historical hatred to reemerge and the Serbs watch the former allies tear each other apart.  Some of the earliest examples of ethnic cleansing take place between the Croats and Muslims in 1993.  Interestingly, by the spring of 1994, after pressure from the international community they renew their alliance and concentrate their venom against the Serbs.

Throughout his journey Butcher interviewed people and their families from all sides of the conflict, in Obljaj, the Milne’s family provided the Serb viewpoint; in Glamoc, the Zdravko family story recounts the experiences of the Croats; and two Imans, Kemal Tokmic and Muzafer Latic present the Muslim view as they fish with Butcher in the mountains near Bugojono.  In all the reader is exposed to the grievances and history of each side. One of Butcher’s goals is to relate how the events of 1914 affected the 1990s civil war and beyond.  The description of Bosnian Serb ethnic cleansing in Banja Luka is informative and maddening as western politicians stood by one of the worst atrocities of the Bosnian War.  The ethnic cleansing, death camps, genocide that were perpetuated against the Bosnian Muslims throughout the fighting “inadvertently provided Islamic militants with a rallying cry used to justify later acts of terrorism.” (143) The nationalism that was responsible for June 28, 1914 reemerged with a vengeance during World War II, and exploded in the 1990s when the “hard fist” of Tito’s reign was gone.  As an aside I wonder how many remnants of Islamic fighters remain who may still be involved in Iraq and Syria as of this writing. The last quarter of the book is devoted to a detailed description of Princip and his co-conspirators planning and carrying out the assassination of the Archduke.  What is interesting is Butcher’s reconstruction of some of Princip’s pre-trial interrogation, trial transcripts, and psychiatric evaluation to determine his modus Vivendi.  It comes down to his hatred of the Habsburg monarchy, his detestation of the poverty he and his fellow Slavs were forced to live in, and his own self-perception of weakness. 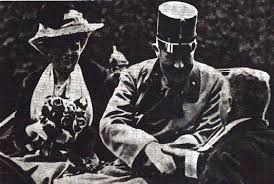 (Archduke Franz Ferdinand with his wife Sophie moments before they are killed, June 28, 1914)

Another fascinating aspect of the book is Butcher’s recreation of the commemorative march, called the “Mars Mira or Peace March.”  After the Bosnian Serb siege of Sarajevo was near an end in 1995, thousands of Bosnian Muslims were forced to make an escape from the city to avoid extermination by the Serbs.  In addition to the genocide at Srebrenica, Serbs also overran Sarajevo and targeted Muslim males for extinction.  The only means of escape was a 50 mile march from the city through a path protected by forest.  Butcher interviewed Dzile Omerovic, a Bosnian Muslim survivor of the march who said, “It was like being trapped in hell, I know no other word for it.”  Omerovic suffers from PTSD, as he continued to repeat how he should have done more to save others.  While Butcher took part in the “Mars Mira” in 2012, he came across numerous mass graves and workers who continue to try to match the unearthed corpses, body parts, and bones to make to identify victims in order for families to finally come to closure.  For Butcher in 2012 he realized he was “dancing on graves.” (223)  Thinking back to 1996 Butcher presents a passage that reminded me of the Cambodian “killing fields” of the 1970s as he found himself stepping out of his jeep  a year after the fall of Srebrenica to find himself in a field where “all around lay skulls, vertebrae, femurs, rotting scrapes of clothes, footwear and a few personal possessions.  So thick lay the bones on the ground that when I returned to the jeep, I remember the back wheels lurching over a ribcage, but from nowhere a man appeared carrying a shotgun and told me to leave.  I still feel guilty for panicking that day, for fleeing the crime scene, relying on the presumption that it would one day be found by war-crimes investigators and the human remains properly identified.” (230)

The book is an informative read and a testament to the author’s commitment to seek out historical truths.  It is loaded with personal vignettes that are striking in their authenticity and emotion.  If you are interested in placing World War I in proper perspective as it relates to the last 100 years, THE TRIGGER should be of much interest.

For a list of recent books on World War I consult the list below that should be reviewed at www.docs-books.com in the future.

THE LOST HISTORY OF 1914: RECONSIDERING THE YEAR THE GREAT WAR BEGAN by Jack Beatty

GEORGE, NICHOLAS, AND WILHELM: THREE ROYAL COUSINS AND THE ROAD TO WORLD WAR I by Miranda Carter

THE SLEEPWALKERS: HOW EUROPE WENT TO WAR IN 1914 by Christopher Clark

THE BEAUTY AND THE SORROW: AN INTIMATE HISTORY OF THE FIRST WORLD WAR by Peter England

THE WAR THAT ENDED PEACE: THE ROAD TO 1914 by Margaret MacMillan

DANCE OF THE FURIES: EUROPE AND THE OUTBREAK OF WORLD WAR I by Michael S. Nieberg

A MAD CATASTROPHE: THE OUTBREAK OF WORLD WAR ONE AND THE COLLAPSE OF THE HABSBURG EMPIRE by Geoffrey Wawro

One of the best books on Princip and the outbreak of war is the classic,  ROAD TO SARAJEVO by Vladimir Dedijer published in 1966.