(Richard M. Nixon boarding a helicopter at the White House on August 9, 1974 after he resigned the presidency)

During the summer of 1973, while in graduate school, I found myself transfixed by the Watergate hearings that were broadcast live each day.  For me it became almost a soap opera with the revelations of Nixon administration misdeeds.  Once Nixon resigned, the battle for the Watergate tapes continued. After the 37th president passed away, the federal government gradually released more of the Nixon tapes resulting in a thorough record of what went on in the Nixon White House between February 16, 1971 and July 12, 1973 when over 3432 hours of tapes were produced.  What we learned before Ken Hughes new book CHASING SHADOWS: THE NIXON TAPES, THE CHENNAULT AFFAIR, AND THE ORIGINS OF WATERGATE was disconcerting enough for the American public, but now as Mr. Hughes, a journalist who is a researcher at the University of Virginia’s Miller Center Presidential Program, since 2000 culled these documents reaching the conclusion that is even more damning concerning Nixon’s abuse of power than the original tapes that were released in the 1970s.  In October, 1969, Joseph McGuinnis wrote in his book, THE SELLING OF THE PRESIDENT 1968 about the “new” Nixon, and the “old Nixon.”  According to Mr. McGinnis, the “new” Nixon was prepackaged as a candidate to avoid the “out bursts” and other political errors the former Vice-President had made in past elections that represented the “old” Nixon.  What emerges from Hughes detailed study is the reemergence of the “old Nixon on steroids,” as his political paranoia, hatred for those who made him look bad, anti-Semitism, and general nastiness is invariably documented on each page.

At the outset the author asks the question that after 40 years what we could possibly not have been exposed to concerning Watergate.  Hughes concludes “that the origins of Watergate extend deeper than we previously knew to encompass a crime committed to elect Nixon in the first place.” (x)  The first section of the book focuses on the Chennault Affair which by any standard was an act of treason against the American people.  At the time rumors abounded in Washington after the election of 1968 that there were members of the Nixon campaign, and probably Nixon himself who interfered with the Vietnam peace negotiations then in progress in Paris.   President Johnson wrestled with the idea of an unconditional bombing halt since March 31, 1968 when he announced he would not seek reelection.  Negotiations in Paris focused on the details of such a bombing halt and the Nixon campaign feared an “October Surprise,”[i] a few days before the election that would allow Vice-President Hubert Humphrey to defeat Nixon, who had led by 18 points in the polls in September, 1968.  According to Hughes, who produces records of conversations and other damning evidence describing meetings and phone calls between members of the Nixon campaign staff and Bui Diem, the South Vietnamese Ambassador to the United States, whereby they promised South Vietnam’s President, Nguyen Van Thieu a better deal if he would muck up the negotiations and wait until Nixon was President.  During the week before the election North Vietnamese negotiators in Paris actually move slightly closer to the Johnson administration position on the bombing pause and it seemed as if a deal was at hand.  Suddenly, Thieu informed Washington that there were aspects of the deal he could not support thus causing the deal to collapse.  Hughes provides proof that the emissary between the Nixon campaign and the South Vietnamese government was Anna Chan Chennault, (the spouse of Lt. General Claire L. Chennault who during World War II was the American leader of a volunteer air group, the Flying Tigers that defended China against Japanese invaders) whose relationship with Nixon went back to the China Lobby of the late 1940s and 1950s when Republicans accused the Truman administration of losing China to the Communists, a charge that the then Congressman Nixon used to vault himself into the Senate in 1948.  Hughes offers an almost daily description of the Paris peace talks with North Vietnam from right after Labor Day until the election.  The reader will learn from the documentary evidence the details of Johnson’s conversations with candidates Humphrey and Nixon.  What emerges is LBJ’s disappointment with the Democratic candidate who he feels is soft concerning a bombing halt and belief that despite Nixon’s duplicitous nature he would be a stronger president concerning Vietnam.  Late in the campaign Johnson learned of Nixon campaign machinations concerning talks in Paris, but he held back releasing it which would have most likely thrown the election to Humphrey.  Johnson warned Nixon very subtly that he knew what was occurring and the Republican candidate feigned surprise and reaffirmed support for the president’s policies.  Throughout the book, Hughes integrates verbatim transcripts to support his points, and there can be no doubt of Nixon and his staff’s culpability in treasonous activities.  The question remains why didn’t LBJ expose the actions of the Nixon campaign.  The answer probably rests with LBJ’s national security concerns, fear of weakening the presidency, and prolonging a war he desperately wanted to end to assure his historical legacy.

(Anna Chennault, the conduit for the Nixon campaign to the South Vietnamese government flanked by Richard Nixon and Henry Kissinger)

If Hughes description of the Chennault Affair is not disturbing enough then his exploration of other aspects of Nixon administration internal policy certainly is.  When Nixon arrives in the White House he immediately ordered his Chief of Staff, H.R. Haldeman to get hold of all the documents that LBJ had accumulated during the presidential campaign, i.e.; NSA intercepts from Ambassador Diem to Saigon, wiretaps of Chennault, CIA bugs overseas etc.  Haldeman tasked Tom Charles Huston to obtain the material.  Huston claimed that the Department of Defense Office of Internal Security Affairs had a report of all events leading to the bombing halt and it was located at the Brookings Institution.  Nixon obviously was concerned that should these documents become public his campaign organization and he himself personally would appear to have violated the Logan Act of 1799 that “prohibits as treasonous activity any interference by American citizens with the negotiations of the US government.” (38)  Nixon’s concern is readily apparent as he stated on June 17, 1971 in reference to the Brookings file.  “Now you remember the Huston’s Plan?[ii]  Implement it; I want it implemented on a thievery basis.  Goddamn it, get in and get those files.  Blow the safe and get it.” (68)

As one reads on it becomes surreal as Nixon becomes obsessed with anyone that appears to be his enemy.  His reaction to the leaking of the Pentagon Papers and the actions of Daniel Ellsberg reflect a heightened paranoia on the part of Nixon as he created the Special Investigative Unit (SIU), known as the “Plumbers” to deal with leaks and what he perceived to be domestic terrorism located in the basement of the White House. “The creation of the SIU violated both criminal law and the US Constitution.”  Nixon created a unit to commit crimes-like burglarizing the Brookings Institution, Daniel Ellsberg’s psychiatrist’s office, and later Democratic Party Headquarters at the Watergate Hotel.  Further, it specifically violated the Fourth Amendment that protected “the right of the people to be secure in their persons, houses, papers, and effects, against unreasonable searches and seizures.” (130)

What was most disturbing to me apart from Nixon’s criminal offenses was his rationale for his actions and his virulent anti-Semitism.  “The leading conspiracy theorist in the White House was the President.  Nixon’s theory centered on three groups: Jews, intellectuals, and Ivy Leaguers.” (122)  He feared a “Jewish cabal” was out to get him arguing that Ellsberg, Morton Halperin (a member of Henry Kissinger’s staff who was wiretapped), and Leslie Gelb all who opposed him were Jews.  Hughes concludes that Nixon spoke about Jews in the NSC and the defense and State Departments as if they were security risks simply because of their religious background.  National security policy was not the only area that the Jews in Nixon’s eyes were out to get him.  Harold Goldstein who was an employment analyst at the Bureau of Labor Statistics for over twenty four years and served democratic and republic presidents going back to Truman, in Nixon’s view was publicizing unemployment statistics to make him look bad as he approached reelection.  This for Nixon was part of the “cabal” and he had Goldstein exiled to a regional office in Montana.   In dealing with Arthur Burns, the Head of the Federal Reserve Board, Nixon believed that Burns monetary and fiscal policy did not support his reelection, and  on July 24, 1971, he remarked to Haldeman, “there’s a Jewish cabal, you know, running through this, working with people like Burns and the rest, and they all-they all only talk to Jews.” (143)

Hughes develops his story that culminates in Watergate and includes some new documents concerning the break-in that had not been previously released.  It really does not change the outcome or the course of history it just reaffirms Nixon’s acute paranoia and as Bruce Mazlish wrote before the 1968 election in his psychological analysis, IN SEARCH OF NIXON, that there was a personality flaw that existed and no matter what success Nixon might have achieved, his self-destructive mechanism would undo it.  When Nixon resigned the presidency on August 8, 1974 and left the White House the next day, Mazlish’s prediction came true. 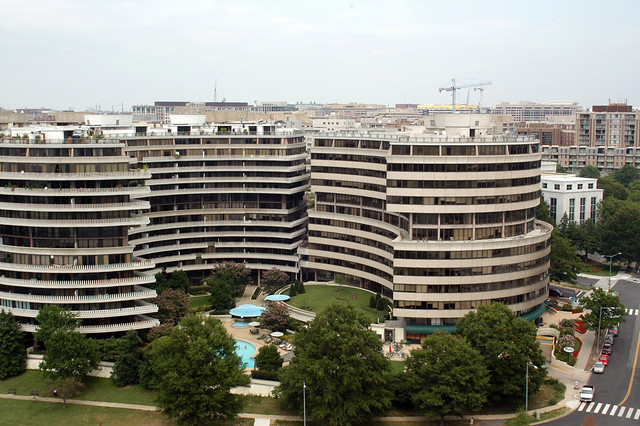 (What would a review of a book on Richard Nixon be without a picture of the Watergate Hotel?)

[i] The title of a book by Gary Sick written after the election of Ronald Reagan accusing the Reagan campaign of interfering with negotiations to obtain the release of American hostages in Iran between the Carter administration and the Iranian government.  The Reagan people were very concerned that Iran would agree to release the hostage’s right before the election, thus swinging the American electorate over to President Carter.

[ii] In June, 1971 the secret Huston Plan was designed to expand government break-ins, wiretaps, and mail openings in the name of fighting domestic terror.