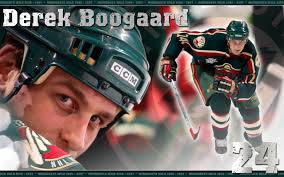 The first time I looked at the dust jacket of John Branch’s new biography of former hockey player Derek Boogaard, entitled, BOY ON ICE: THE LIFE AND DEATH OF DEREK BOOGAARD I was struck by what a large figure Boogaard presented.  Here was an individual who stood almost seven feet tall on skates and weighed around 275 pounds, however after reading Branch’s fine narrative of his life I was struck by how gentle and unassuming a person he was, and in many ways his behavior and thoughts were that of a boy, at times simple, and at times complex.

Derek Boogaard grew up in a small prairie town in northern Saskatchewan where hockey was something that boys engaged in as almost a religion.  If you had any talent or perhaps the size it became a way of life.  Boogaard fit right into this formula.  He was always the largest boy for his age and though he was not the swiftest skater or the most proficient stick handler, he had what many coaches say cannot be taught, size.  From his earliest days in organized hockey his role became clear, defend his smaller teammates, and make opponents feel uncomfortable whenever he was on the ice.  John Branch does an exceptional job following Boogaard’s development as a person and a hockey player from a very young age and traces his career from its lowest level when kids follow the puck like swarming bees, through his teenage years as a Bantam, through junior hockey, various levels of minor league hockey, until he finally reached the pinnacle, the National Hockey League.  In each instance, thanks to the cooperation of the Boogaard family, close friends, professional hockey careerists, and finally notes that Derek left about his childhood, Branch is able to explain what his subject went through and was thinking at each level of his career.

Boogaard’s official role as a hockey player was that of an “enforcer,” a role that consisted of intimidating opponents on the ice and if need be to fight the person who filled the same role for the opposing team.  Branch does a marvelous job of tracing the history of violence in hockey and the evolution of the “enforcer.”  He discusses the impact of that role on the sport, the reactions of players and coaches, and the rationalizations offered by team general managers, owners, and National Hockey League officials when it was becoming increasingly obvious that the constant violence, that at times dominated the sport, was resulting in the deterioration of the medical health of a number of hockey players in retirement, and who were still on the ice.

Branch does a superb job analyzing the sub culture that surrounds the “enforcer” in hockey.  For most of the men who adopt the role it is their only “meal ticket” to play the sport professionally.  Though some possess some hockey sense and/or skills, most do not, and are labeled as “goons.”  These men do not enjoy fighting and in many ways approach their role as nothing more than a job.  In Derek’s case off the ice he was a very sweet person who tried to care for everyone, was very giving of himself, and his generosity with his time and money new no bounds.  However, when Derek was challenged on the ice, it seemed as if a light switch was turned on and he would try and pummel his opponent(s) into submission.  Once the fight was over he would skate to the penalty box without engaging in the histrionics that other enforcers engaged in as they fed off the crowd in the arena.  For years, enforcers liked what they earned from fighting, respect and a career that paid them well.  However, they were not aware of the hidden costs.  For Derek, with strength and power, with the ability to win fights and gain recognition, he basically did not enjoy beating others up.  “He enjoyed it when he needed it, but some of it weighed on him.”  The pressure was enormous, one lost fight, a broken bone or injury and the team could send him back to the minors, a lucrative career, over.  It was difficult never knowing what a game would bring as “shift by shift, enforcers had to be ready to fight at a moment’s notice.”(154)  If you didn’t want to do it, there were many others who would gladly take your roster spot.  “Even as Derek arrived, the line of NHL enforcers was littered with broken lives.  Alcohol and pain killers especially became the antidotes to the pain and pressure.” (155) 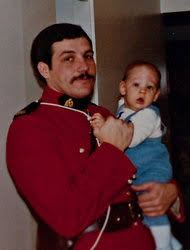 (Derek and his dad, Len who was a member of the Royal Canadian Mounted Police)

Branch catalogued many of Derek’s fights as if he were a ring announcer covering a fight broadcast from Las Vegas.  The toll of his hockey career led to numerous injuries, broken noses, ripped tissue that never healed on his knuckles, torn shoulder muscles and constant back pain. For Derek and many others they thought their only recourse to maintain their jobs was pain killers.  Branch delineates the prodigious amount of pain killers that Derek ingested over his four year hockey career.  Vicodin, oxycodone, Percocet, oxycontin, et al was the elixir that dulled the pain.  Team doctors would prescribe medications, many never kept records of what was provided, and if doctors would not cooperate, Derek, who had the funds found illegal ways to acquire his drugs.  Two attempts at rehabilitation failed and what was increasingly clear was that the constant pounding that Derek’s brain experienced led to countless concussions that he was unaware of.  He exhibited textbook characteristics of post concussion syndrome-mood swings, depression, loneliness, disorientation, and memory loss.  It was clear when he over dosed accidently mixing alcohol and pain killers that had he not died at the age of twenty-nine, that his ensuing years would have witnessed the onset of dementia at a very young age.  Derek’s brain was donated to science and the findings are very scary in terms of individuals who have suffered constant blows to the head.  Since these blows are cumulative, each concussion, or whiplash movement will create the nausea, headaches, and other symptoms repeatedly.  In Derek’s case it is especially sad because according to those close to him, he did not have a mean bone in his body. 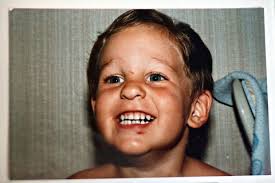 Branch has done a service by presenting a wonderful biography, placing it in the context of a national epidemic dealing with brain injuries.  Research is an ongoing avocation, but Branch’s book should raise the eyebrows of parents and anyone involved in contact sports, no matter the level, that we must do more to protect the athletes who are involved.  If that means raising the curtain that sports officials at all levels have refused to raise, to change some of the rules, especially around fighting and unnecessary violence so be it-I am certain it will not detract from the skill and beauty of the sports involved, but it will save lives and improve the quality of life for athletes after they retire.  This book is not your typical sports biography, as a father of a son who played prep school hockey and college lacrosse I wonder how many times he had “his bell rung.”  Branch’s book is a wake up call, hopefully the right people will be listening.