Recent events between the United States and North Korea cast a long shadow over relations between these countries.  The “supposed” computer hacking of Sony pictures by North Korea, the disagreement over North Korean attempts to develop nuclear weapons, and a host of other issues like North Korean attacks against South Korean ships makes the appearance of Jack Cheevers’ ACT OF WAR rather timely.  Cheevers, a former political reporter for the Los Angeles Times presents a comprehensive study of the North Korean seizure of the USS Pueblo, an American spy ship trolling international waters in January, 1968.  Today we worry about North Korean threats to South Korea and Japan, but in the 1960s the United States was in the midst of the Cold War and only a decade out from the end of the Korean War.  Embroiled in Vietnam, the United States continued to spy on the Soviet Union, Communist China, and North Korea throughout the period.  One might wonder why the North Koreans would seize an American ship at that time.  The answer probably rests with North Korean dictator, Kim Il-Sung’s hatred for the United States, and when presented an opportunity to give Washington a “black eye,” Kim could not resist, especially with the United States caught up in the quagmire of Vietnam.

According to Cheevers, American loses while spying in the region were not uncommon before the Pueblo was seized.  Between 1950 and 1956, seven American reconnaissance aircraft were shot down over the Sea of Japan or near Siberia, resulting in the loss of forty-six US airmen, with another sixteen lost to a typhoon. (2)  The Pueblo was part of a top secret Navy program to pack refurbished US freighters with advanced electronics to keep tabs on the Soviet Union’s expanding Pacific and Mediterranean fleets.  The program called for seventy ships, but only three were built, one of which was the Pueblo.  The loss of the ship with its sophisticated surveillance gear, code machines, and documents was one of the worst intelligence debacles in American history.  Subsequent congressional and naval investigations revealed “appalling complacency and short sightedness in the planning and execution of the Pueblo mission.” (3)  The goal was to determine how much of a threat existed for South Korea, since North Korea’s Stalinist leaders were committed to unifying the peninsula, an area were 55,000 American troops stood in the way of a possible invasion.  This book is important as we continue to unleash covert operations worldwide, as it shows what can happen when things do not proceed as planned.

(Capt. Loyd Bucher and his crew seized by North Korea in January, 1968)

Cheevers offers a detailed description of the planning of the mission and what emerges is that Captain Lloyd Bucher was given command of a ship that was not in the best condition and was overloaded with top secret documents, many of which were not needed for the mission.  A full description of the seizure of the ship, the incarceration of the crew, their torture and interrogation, their final release, and the Naval and Congressional investigations that’s followed are presented.  The ship was supposedly conducting “oceanic research,” and many of the crew were not fully cognizant of the Pueblo’s spy mission.  What separates Cheevers’ work from previous books on the subject is his access to new documentation, particularly those of the Soviet Union, and American naval archives.  Further, he was able to interview a large number of the Pueblo’s original crew.  This leads to a narrative that at times reads like a transcript or movie script of many important scenes, particularly the North Korean seizure of the ship, the interactions of the crew during their imprisonment, and the Navy Court of Inquiry which was formed to determine if Capt. Bucher and his crew had conducted themselves appropriately.

The first surprising aspect of the book is the lack of training the crew experienced, and how they should respond if attacked.  Bucher was told by naval officials not to worry because he would always remain in international waters beyond the twelve mile limit the North Koreans claimed.  Further, Bucher was not given the appropriate equipment to destroy sensitive documents and equipment, even though he requested it.  In addition, the two linguists assigned to the mission hadn’t spoken Korean in a few years and confessed that they needed dictionaries to translate radio intercepts or documents, and in addition, the overall crew was very inexperienced.  The bottom line is that there was no real contingency plan to assist the Pueblo should North Korea become a problem.  It was clear no naval assistance would be forthcoming in the event of an attack, and Bucher would be on his own.  Once the attack occurred it appears Bucher did his best, knowing the United States would not entertain a rescue operation. 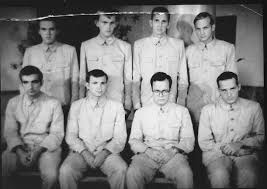 (The Pueblo crew in captivity)

The seizure of the ship compounded problems for the Johnson administration.  The Tet offensive was a few weeks away, the Marine fire base at Ke Sanh was isolated, the anti-war movement in the United States was growing, and the South Korean President, Park Chung Hee wanted to use the situation to launch an attack on North Korea.  Cheevers reviews the mindset of the American government as well as the public’s reaction to the seizure and accurately describes President Johnson’s reluctance to take military action.  The United States did deploy battle groups to the Sea of Japan as a show of force, but with no plan to use it, it was a hollow gesture.  A far bigger problem was reigning in President Park, whose palace was almost breached by North Korean commandos shortly before the Pueblo was seized.  Cheevers’ dialogue between Cyrus Vance, Johnson’s emissary and Park is eye opening as was the meeting between Johnson and Park later in the crisis.  If Park could not gain American acquiescence for a military response, he requested hundreds of millions of dollars of military hardware instead.  There were 30,000 South Korean troops fighting in Vietnam, and Park had promised another 11,000, and Johnson wanted to make sure that Park did not renege on his commitment.  Cheevers does a commendable job always placing the Pueblo crisis in the context of the war raging in Southeast Asia.

Cheevers’ absorbing description of how the Americans were treated in captivity is largely based on interviews of the crew.  The brutality of their treatment and the psychological games their captures subjected Bucher and his crew was unconscionable.  The beatings, outright torture, lack of hygiene and malnutrition the crew suffered through are catalogued in detail.  The pressure on the Johnson administration domestically increased throughout the incarceration until a deal was finally reached.  The issue revolved around the North Korean demand of an apology which was finally papered over by a convoluted strategy that produced a US admission of spying at the same time they offered a strong denial.

Perhaps the most interesting part of the book is Cheevers’ coverage of the hero’s welcome Bucher and his crew received and how the Navy investigated who was to blame for the ship’s seizure.  The fact that Bucher surrendered his ship without a fight to save his crew did not sit well with naval history purists.  For the Navy, the men were expendable, but the intelligence equipment and documents were not.  The details of the Naval Court of Inquiry headed by five career admirals, three of which had commanded destroyers during World War II and the Korean War concluded that Bucher should be court-martialed, but were overruled because of public opinion.  The questions and answers from the trial reflect how difficult a task it was to investigate the seizure and find a scapegoat for the Navy.  Throughout, Bucher never lost the respect of his crew and his leadership allowed his men to bond, which in large part is responsible for their survival.

Cheevers should be commended for his approach to the crisis, the important questions he raises, and the reconstruction of testimony both Naval and Congressional.  ACT OF WAR seems to me the definitive account of the seizure of the Pueblo and its ramifications for the Navy, the intelligence community, and politicians.  It is an excellent historical narrative that reads like a novel in sections of the book.  It is a great read and a superb work of investigative reporting.