The title VENDETTA of James Neff’s new book that deals with Robert F. Kennedy’s quest to bring Jimmy Hoffa to justice is chilling from the perspective of how unions, organized crime, and businesses colluded to defraud union members, the government, and the general public.  Neff begins his story with the assassination of President John F. Kennedy on November 22, 1963 that provoked a reaction from his brother Bobby, “there’s so much bitterness, and I thought they’d get one of us….I thought it would be me.” (6)  At the time Robert Kennedy was the Attorney General and was in the midst of his Justice Department’s prosecution of Hoffa for witness tampering, real estate, and pension fraud.  This would culminate in Hoffa’s conviction in early 1964 that ended a seven year journey for Robert Kennedy to bring the corrupt Teamster President to justice.  Despite the conviction, Kennedy remained unsettled because he could never be sure that Hoffa, who danced on his desk and shouted with glee when learning of the president’s assassination, was not behind his brother’s death.

Neff, a Pulitzer Prize winning investigations editor at the Seattle Times has written a comprehensive and engrossing history of the relationship between the Kennedy brothers and Jimmy Hoffa.  He explores all the major characters who were involved in that relationship and presents an objective and well written account of a very important aspect of American labor history.  Neff introduces both protagonists with short biographies of each and we learn that Robert Kennedy saw himself as a crusader against what he perceived to be labor injustice, and Jimmy Hoffa, who believed he was a victim of a class war by the rich Kennedy’s as he was convinced that he was unjustly persecuted for seven years until they finally nailed him.  During that time the author leads the reader through RFK’s appointment to the staff of the Senate Sub-Committee on Organized Crime headed by Alabama Senator John L. McClellan.  RFK’s brother was also a member of the committee and wanted to use it as a stepping stone to enhance his presidential credentials.  RFK zeroed in on the influence of organized crime and their infiltration of labor unions, and made Jimmy Hoffa his target as the epitome of what he was trying to prove that would hopefully lead to strong congressional legislation to weaken the criminal hold on American labor.  Neff describes an obsessed Robert Kennedy over a seven year period trying to prosecute Hoffa and put him behind bars.  Their conflict was epic and after a few committee hearings Hoffa was convinced he was being unjustly targeted which was the source of their personal vendetta. 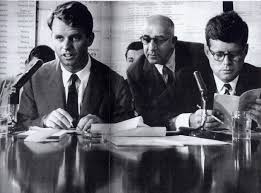 Neff provides the reader with intricate details employing committee transcripts and analysis as the McClellan hearings evolve.  The reader is present in the Senate chambers and can easily grasp the hatred between the two men.  Neff discusses each character that is mentioned in detail whether it is Edward Bennett Williams, the suave and sophisticated Capitol Hill lawyer who defended Hoffa; Bernard Spindel, a New York veteran from World War II trained in electronics who developed advanced eavesdropping devices for Hoffa; Walter Sheridan, RFK’s alter ego at the Justice Department who led the prosecution of the union leader; to David Beck, the crooked Teamster President who preceded Hoffa.  These are just a few of the important players in the narrative, and Neff is able to weave many more into the story.  As you read on it appears that Neff has left no stone unturned in his research.  He explores legal strategy, mob participation, intimidation tactics, and the stretching of constitutional guarantees by the Justice Department.  Neff takes us into strategy sessions, Hoffa’s labor meetings, and Kennedy’s office as we learn how each component of the overall story will unfold.

Kennedy’s obsession led to the “Hoffa Strike Force” once his brother convinced him to become Attorney General.  It is here that Neff recounts conversations and other details as the hatred between Kennedy and Hoffa comes to a head.  We witness how slippery Hoffa was to prosecute and convict and for seven years Kennedy was almost at a loss as to his failure.  Hoffa was elected Teamster president and his overall influence and popularity among union members could not be broken.  One of the most interesting aspects of the book was the 1960 Presidential election.  Recounting Hoffa strategy to block John F. Kennedy’s nomination the underside of politics is in full view.  The use of union funds, members, and other assets were fully employed by Hoffa first in the Democratic primaries and then in the general election as the teamsters were deployed in full to bring about the election of Richard Nixon, who in true Nixonian fashion promised Hoffa to protect him from the Justice Department once he was elected.  Another fascinating part of the book is the limited role FBI Director Herbert Hoover played in RFK’s quest.  Hoover was more interested in his own agenda who was not averse to using his own intelligence against the Kennedy’s, particularly their sexual escapades.

Perhaps the most important section of the book involves how the Justice Department finally is able to convict Hoffa of jury tampering and pension fraud in 1964.  Using a former Hoffa ally as a plant in return for a plea deal, RFK’s people are able to surprise Hoffa during the first trial for witness tampering and destroy his defense.  Once convicted his next trial for pension fraud was easier to prosecute.  Attempts to appeal failed as the Supreme Court ruled against him and Hoffa would be imprisoned until pardoned by Nixon in 1971.   Hoffa would suffer the same fate as Robert Kennedy as he is murdered in a Detroit suburb in 1975, probably a mob hit, but to this day we are not sure since a body has never been found.

Neff’s skill as a narrative historian allows the reader to immerse themselves in the story and I will admit it was difficult to put down.  The book reads like a crime novel, but in reality it is the sordid history of the Teamsters Union over decades culminating in the reign of Jimmy Hoffa.  The book is an excellent read and numerous interesting and surprising things will emerge in what really can be categorized as a courtroom thriller.