(Associates at Market Basket demonstrate their support for their CEO Arthur T. Demoulas)

For me the Market Basket story of the summer of 2014 is somewhat personal.  I had the pleasure of teaching two of Arthur T. Demoulas children and had numerous interactions with the family.  They treated my family as if we were part of theirs and their generosity and support when needed was always present.  The concept of “family” is also the core of how the Market Basket supermarket chain has always been operated.  This concept forms the basis of Daniel Korschun and Grant Welker’s new book WE ARE MARKET BASKET which relates the story of the amazing relationship between management and labor, describing the behind the scenes events and analysis that accompanied the firing of Arthur T. Demoulas (Arthur T.) as company CEO in 2014, bringing to a head an ongoing family dispute that had existed for years.  The dispute has become a case study for many business classes as in this instance labor supported management in the person of Arthur T., when his cousin Arthur S. Demoulas (Arthur S.) sought to destroy the company’s successful business model by squeezing every last dime out of Market Basket to the detriment of the loyal workers and customers of the chain.

The ongoing battle for the leading supermarket chain in New England was between two different corporate views.  The first was followed by Arthur T. who continued the principles laid down by his father Telemachus and his uncle George, the sons of the chain’s founder in creating a sense of family and empowerment among the company’s labor force.  Treating workers as associates with generous profit sharing and other benefits, and keeping prices down for middle and lower consumers whereby helping balance the socioeconomic divide in a given community.  For Arthur S., George’s son, the goal was quite different.  After an earlier court decision, Arthur S. and his faction controlled 50.5% of the company’s stock and a majority of its corporate board.  They sought to implement a plan to shift as much of the company’s liquidity to shareholders as possible, this involved an immediate and continuous dividend of all excess cash, beginning with a $300 million payout in the fall of 2013.  Further, it appeared that Arthur S. and his cohorts were going to sell the company to Delhaize Group, that a few years earlier had also purchased Hannafords.  To achieve this goal, Arthur T. had to be fired as company CEO.  In a nutshell that is the background that Daniel Korschun, a marketing professor at Drexel University; and Grant Welker, a journalist with the Lowell News present in their new book.  However, the detail presented goes much deeper and upon completion what emerges is the family background to the business dating from its founding by Greek immigrants in 1917, a detailed discussion of the company’s philosophy and business model, and the nasty corporate war that raged inside the family until Arthur T. was finally restored as company CEO in August, 2014.

Market Basket is a $4.5 billion corporation that retains the mom and pop feel that its founder, Athanasios Demoulas and his sons Telemachus and George cultivated from the outset.  The authors detail the course of the company’s evolution as it caught the American supermarket phase of the 1950s to create the success that it has become.  Once its founder died, the two son’s success was built on their ability to serve families on fixed and limited incomes as the textile mills closed down in Lowell, MA where the first store was opened.  They kept their prices low which in effect raised their customer’s standard of living.  Further, the Demoulas brothers were open to local producers and did not charge the high slotting fees that other chains did.  They relied on offering high quality products, fully staffed and stocked their stores on a level not matched by their competitors, and treated their employees well so they would have a vested interest in the company’s success.

The authors acknowledge that Arthur T. possessed personal attributes that were almost “cult” like during the ensuing strike following his dismissal as CEO, but they argue there is much more to this complex man than is often presented in the media.  He is a perfectionist who demands excellence and an extremely tough negotiator.  He believes in having almost complete control in implementing his vision, but he is an astute individual who has a good “heart” and has developed a strong and loyal management team that has been with him for years.  He believes workers, known as associates have to learn the business from the ground up and promoting from within, not hiring the latest MBA.  Like his father, Arthur T. “overarching goal is to grow the company, and his personal goal is to be a good merchant,” which is in marked contrast to his cousin, Arthur S.   For Arthur T., “Market Basket has a moral obligation to the communities we serve,” which explains the amazing support he received from customers during the 2014 strike and how they returned as shoppers once he was able to buy out the opposition and return as CEO.

The authors stress the culture that has evolved at Market Basket over the years-loyalty, family, and community.  The sense of family transcends traditional boundaries as is described in detail throughout the narrative.  The culture of the company rests on empowerment as “associates believe that their job is important and that they as individuals have roles in the success of the company.”  The authors devote a significant amount of time to explaining leadership and business practice theory and apply different academic philosophies to Market Basket.  But, it seems in all cases no matter which study or market research that is consulted, the company either stands out as one of the best, or it has adapted and never wavered from its core values, i.e.; empowerment, communication, and distributed leadership strategies.  Market Basket executives consistently break with the accepted wisdom put forth in business schools and focus on weekly shoppers who buy for their families, as opposed to the newer trends of the mega store like Wegmans or the occasional shopper like Trader Joe’s.

By 2013 following the death of George, the family conflict over the company’s philosophy could no longer be contained once his widow and son shifted their support to Arthur S.  The authors had access to Market Basket board meetings as part of their research that provides a unique view into corporate conflict.  The strategy of Arthur S. and his board allies to remove his cousin are laid out, in addition to the birth of the movement that would support Arthur T.  Once the firing took place fear spread among associates that there company was about to be sold and felt that their lives that were totally integrated into the Market Basket family were about to be destroyed.  A detailed chronological description of events from the perspective of the opposition to Arthur S. and his board actions is presented, as is a perceptive analysis of the strategic errors they made. 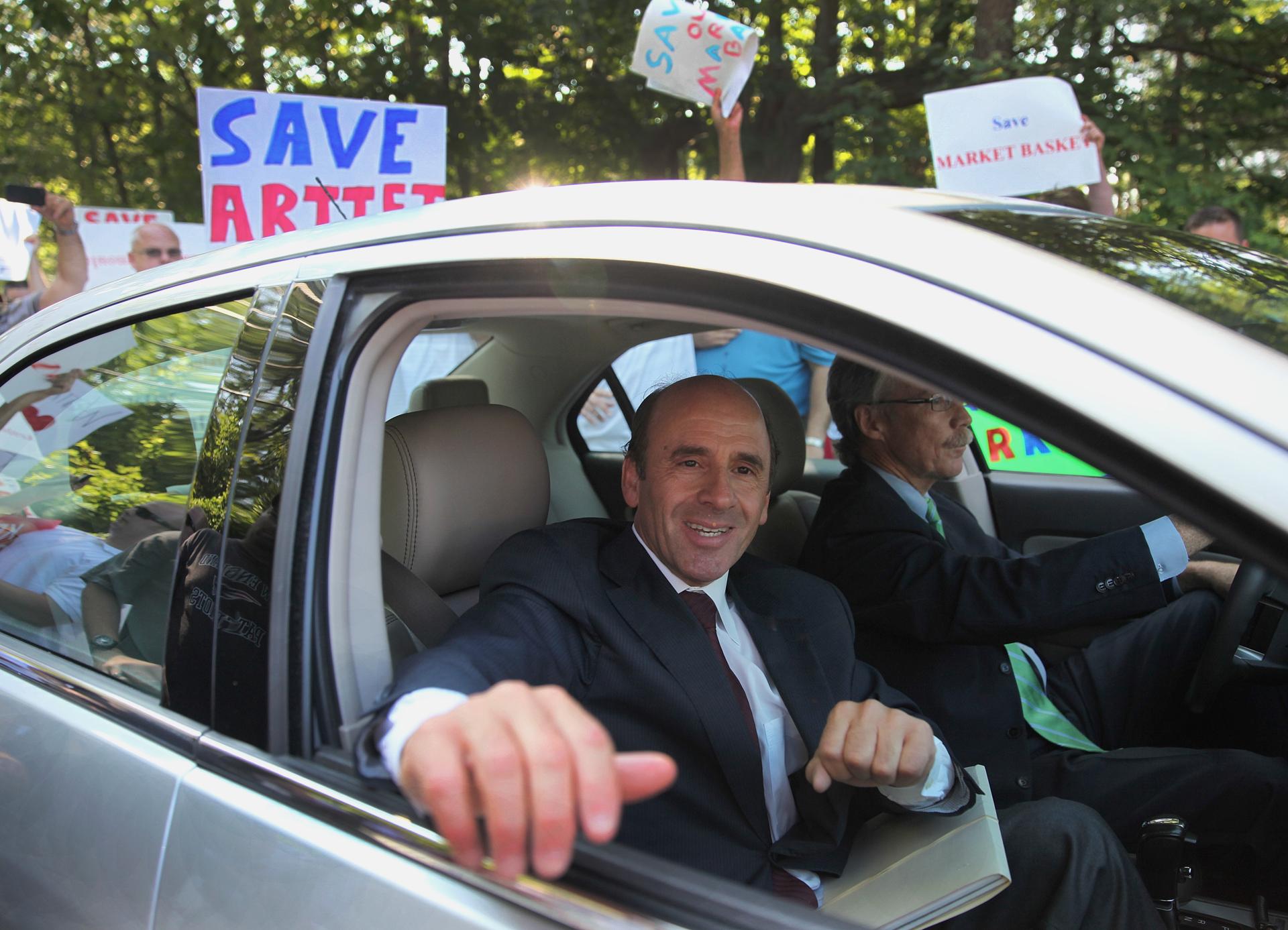 To gain the feel of what the firing meant to Market Basket associates the authors included numerous interviews in the text, and the relationship between Arthur T. and his employees is clearly one of deep emotion and support.  The authors spend a major part of the book analyzing the strike that was implemented to save Arthur T. and their vision of their jobs from the warehouse and supply stoppages, the use of social media to gain outside support, as well as the economic and political ramifications that probably would have taken place had Arthur T. not been able to purchase control of the company.  The narrative and dialogue presented is often breezy, but in a very serious manner because of what was at stake.  It is a fine effort by the authors and fully explains why so many people were “honking their horns” throughout the summer of 2014 as they drove by their local Market Basket store.