When Barrack Obama was elected president and assumed office in 2009 most people expected that there would be vast changes to America’s pursuit of the war on terror.  If one followed Obama’s rhetoric while serving in the state Senate in Illinois, the United States Senate, and during the 2008 presidential campaign one would probably have drawn the conclusion that once in office the Bush-Cheney policies following 9/11 would be in for drastic change, but according to New York Times reporter Charlie Savage’s new book POWER WARS: INSIDE OBAMA’S POST-9/11 PRESIDENCY that was not the case.  As Savage writes, “having promised change, the new president seemed to be delivering something more like a mere adjustment – a ‘right-sizing’ of America’s war on terror.”  Savage has done an incredible job using his sources inside the Bush and Obama administrations, along with his access to legal scholars throughout the United States in producing an extremely detailed account of how members of the Obama administration went about determining the legalities of its policies in dealing with the war on terror.  The result is a text that is a bit over 700 pages that is at times extremely dense and difficult to stay with.  However, if one does pursue the task of getting through the myriad of legal arguments that are presented you will become well informed about how the American legal system, and to a lesser extent international law, deals with the nuances of trying to create and justify a lawful approach in dealing with numerous aspects of defending our country against terrorism, but at the same time protecting civil liberties, and abiding by its commitment to the rule of law, the right process, and not being a carbon copy of the Bush administration. The result is a book that is as lawyerly as its subject matter, and not designed for the general reader. 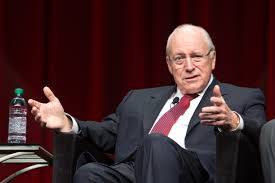 (Former VP Dick Cheney, the author of many of the Bush administration’s war on terror policies)

The question must be asked, was Obama a legal hypocrite?  Before he took office Obama produced many flowery phrases in criticizing the methods employed by Bush and Cheney.  He spoke of the use of torture, the violation of the privacy of American citizens, and the illegalities of data and intelligence collection, but once in the White House he engaged in many of the same practices.  Extraordinary rendition, NSA surveillance, CIA drone strikes, and the lack of transparency were among the policy choices that Obama engaged in-this wasn’t even “Bush light,” it was more like something close to his evil twin, but with an intellectual justification for everything they did.

The comparison with the Bush administration is well presented as Savage reviews the evolution of Cheney’s unitary view of presidential power going back to the 1970s and Watergate which produced a resurgence of congressional power.  Savage also traces the convoluted legal arguments that Bush-Cheney concocted to implement its national security agenda.  The key person was John Yoo, an important Justice Department official after 9/11 who argued in numerous secret memorandums that the “president, as commander-in-chief, had the constitutional authority to lawfully take actions that were seemingly prohibited by federal statues and treaties.”  The Bush administration was in the business of creating executive-power precedents i.e., wiretapping without warrants, withdrawing the United States from the ABM treaty with Russia unilaterally, setting aside the Geneva Convention in dealing with POWs in Afghanistan, and not seeking congressional approval for these actions even though Congress had ratified these treaties.  The Bush administration established military commissions to prosecute terrorist suspects outside the civilian court system and created theories, set precedents based on these theories, and acted on them defying statutory constraint.  Obama’s critiques against these policies were based on violations of civil liberties and the rule of law, since there was no legal process to support what they were doing.  The Bush administration, with Vice-President Cheney leading the way sought to limit Congress and the courts, increase government secrecy, and concentrate as much unchecked power in the upper levels of the executive branch as they could.  Many Obama supporters and administration members argued that some of Bush’s policies were in fact correct, but they needed legislative approval before they could be implemented.

For Obama and his core of liberal legal appointees the failed “underwear bomber,” Umar Farouk Abdulmutallab’s attempt to blow up a Northwest Airlines passenger plane end route to Detroit Christmas day, 2009 dramatically altered their approach to the war on terror.  For the president he realized that a successful terror attack on American soil could destroy his entire domestic agenda, be it health care or the many programs Obama hoped to implement.  All of a sudden he had to live with the day by day security needs of the United States and keep its citizens safe.  This did not mean he would drop his lawyerly, overly cautious approach to policies, but in the end terrorism and the threat to the homeland was real, not a theoretical concern.  As Savage writes, Obama threatened to fire people if the missteps surrounding the incident were repeated.  “It’s strict liability now, he said, echoing George Bush’s “don’t ever let that happen again directive to Attorney General John Ashcroft soon after 9/11.”  As Jack Goldsmith writes in The New Rambler, Savage’s account of Obama’s continuity with Bush “breaks less new ground than does his reconstruction of the many ways in which it expanded the President’s war powers from the Bush baseline.”   For example, the drone strike program was expanded dramatically, in part because of the improved technology that did not exist under Bush, and its use in targeting four American citizens in Yemen, chief among them was the cleric Anwar al-Awlaki, who was an American citizen.  Savage does a nice job exploring al-Awlaki’s relationship to the “underwear bomber” as well as the legal debates within the administration to determine whether the US was justified in killing one of its own citizens without due process. The lawyerly approach reached the conclusion it was legal if the target was an imminent threat to the United States.  Scott Shane’s recent book, Objective Troy does an excellent job detailing this aspect of Savage’s work.

After the near miss on Christmas day Obama was faced with a great deal of Republican criticism.  Buoyed by the victory of Scott Brown in Massachusetts who won a special election for Ted Kennedy’s Senate seat employing national security as his core message, Republicans in congress called for terrorism captives to be handled exclusively by the military.  According to Savage, all of a sudden Obama was attentive and deeply involved as he realized that terrorism could shape his presidency.  What follows is a series of detailed arguments within the Obama administration dealing with all aspects of terrorism policy from 2010 through 2014.  It seems that Savage does not miss any subject as it related to the war on terror.  The closing of Guantanamo comes up repeatedly, whether dealing with freeing inmates, closing the prison, adding new detainees etc.  The legalities of surveillance policy and the use of F.I.S.A. courts encompasses a significant amount of the text.  The debate as to whether captured detainees should be tried by military commissions as opposed to civilian courts is dealt with from the legal perspective as well as that of political partisanship.  The debate as to whether al-Shabaab, the Somalian Islamic terrorist organization was an associated force of al-Qaeda to justify targeting its members with drone strikes is fascinating.  The Snowden leaks makes for interesting reading as well as the Obama administration’s responses to them.  In reality Obama was less successful in reducing presidential power than he anticipated, and he often supported his own novel expansions of presidential powers.  When he needed to expand executive powers like going after ISIS with drone strikes in Libya, he did not feel constrained.

As a result Savage decides that Obama was less a transformative president after 9/11, but more so a transitional one.  As James Mann writes in the New York Times, Obama created a “lawyerly” administration that added “an additional layer of rules standards, and procedures to the unsettling premise that the United States was still at war and would, of necessity, remain so with no end in sight.”  I agree with Mann that this is the major theme that the reader should extract from all the legal theories and lawyerly language that Savage presents, if one can get plough through the tremendous amount of material that is reviewed and analyzed.