The 20th century was greatly affected by a number of prominent families, but aside from the Roosevelts, few stand out more than the Churchills and the Kennedys, and their relationship with each other.  The interactions between these two families forms the core of Thomas Maier’s recent book, WHEN LIONS ROAR: THE CHURCHILLS AND THE KENNEDYS.  The book explores the different dynamics that existed between the two families and the world around them, be it political, financial, personal, and too often, sexual.  The result is a historical work that at times seems peppered with a bit too much gossip.

As I examined the book I wondered if the author had unearthed anything of substance.  Tackling a topic that has been mined by many excellent historians, it seemed to be a difficult task.  Concentrating on the relationship between fathers and sons; Winston Churchill and his son Randolph, and Joseph P. Kennedy and his sons Joe Jr. and John, the author provides a glimpse into both families and the intensity of their relationships.  The most interesting facet of the book involves how both fathers had such grandiose hopes for their sons, but in both cases, the fathers were to be disappointed.  Randolph spent much of his life trying to emerge from the shadow of his famous father, while remaining loyal to him.  At times father and son would grow to resent each other, Winston disappointed by his somewhat alcoholic and womanizing son who would never reach the heights that were expected of him.  Joseph Kennedy’s disappointment revolved around the agony of losing his eldest son Joe Jr., whose naval bomber was shot down over England.  Unlike Winston, the senior Kennedy, would be rewarded when his second youngest son, John Fitzgerald would become a war hero, and successful politician who would be elected president in 1960.

(The Kennedy Patriarch and his family)

Maier provides the background story of each family that has been told many times before.  His biographical sketches of Winston and Joseph Sr. present nothing substantially new, but it should prove helpful for the general reader.  The most important component is how the two families become dependent on each other.  Maier begins in 1933 with the first meeting of Winston and Joseph Sr., as both men were allies when it came to prohibition.  The senior Kennedy hoped to procure a deal to acquire the distribution rights for English gin and other liquors in the United States as prohibition was coming to an end.  Kennedy would use his close relationship with Franklin D. Roosevelt’s son, James as a conduit to his father and a budding relationship with Churchill to achieve his goals.  Kennedy achieved an economic coup as he set up a company called Somerset importers and landed the contract to distribute Dewar’s scotch, Gordon’s gin and other important liquors.   Maier reviews the instability of Churchill’s income in comparison to Kennedy, particularly when he was out of power.  Churchill had to rely on his writing and the “gifts” of rich friends to survive a lifestyle he could not afford.  One wonders if the future Prime Minister benefited in any way from the future Ambassador to the United Kingdom.  For a wonderful discussion of Churchill’s finances see the new book NO MORE CHAMPAGNE: CHURCHILL AND HIS MONEY by David Lough.

Maier examines the different responses taken by both families to the rise of Adolph Hitler to power in Germany.  Both Churchill and Kennedy offspring follow the leads of their fathers.  Randolph would mimic his father’s preparedness views and the fear that war with the Nazis was inevitable.  Joseph Jr., then a student at the London School of Economics conformed to his father’s views about the Nazis, even expressing a certain amount of anti-Semitism.  John F. didn’t toe the line as much as his elder brother and more and more he came around to Churchill’s viewpoint.  A tendentious problem developed between the fathers as how to approach the militarization and expansion of Nazi Germany.  Once the war broke out and both men were in positions of power, the diplomatic rift between the two was exposed as Kennedy seemed to rely on Charles Lindbergh’s opinion of the Nazis, and his own fears of war and how it could affect his son’s futures.   Kennedy’s overt support for appeasement throughout his stay in London created a great deal of tension between the two men.  Churchill was careful of not pushing Kennedy too far because he realized how dependent he was on the creation of a “special relationship” with the United States, especially after the Nazi seizure of Holland, Belgium, and France in 1940.  Behind the scenes we are told the story of how FDR manipulated both men and how the president could no longer tolerate an ambassador who was undermining his foreign policy, a story that Michael Bechloss has told very effectively in his book, KENNEDY AND ROOSEVELT. 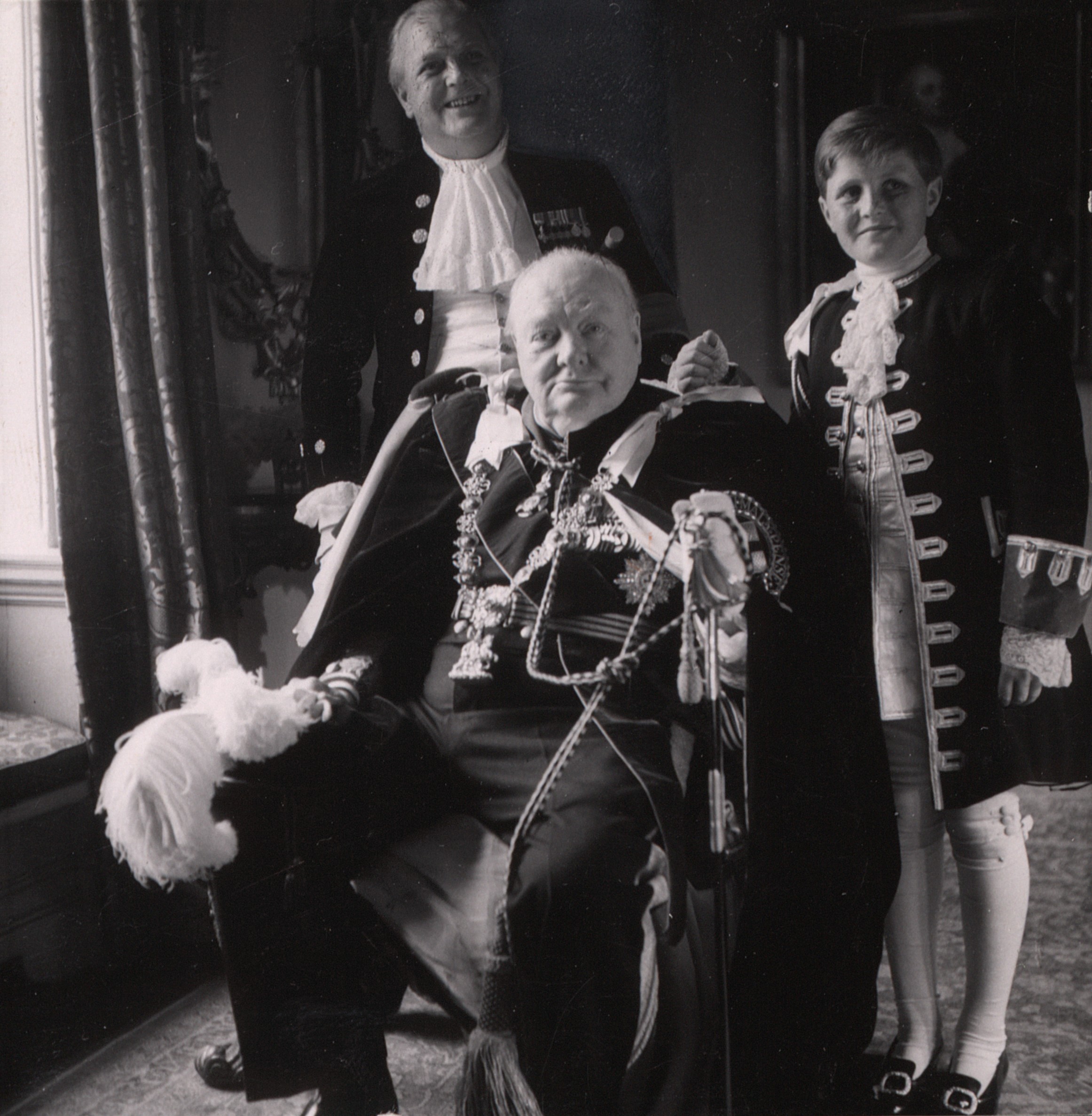 The one major criticism of the book I would raise is the amount of racy information Maier either states or suggests.  The reader is presented with a series of love triangles, affairs, and the sexual needs of the different characters that appear in the narrative.  Randolph Churchill’s wife Pamela is involved with FDR’s personal liaison to Churchill and later Ambassador to the Soviet Union Averell Harriman, Edward R. Morrow of CBS news, among a number of prominent historical figures.  The affairs of Clare Booth, writer, politician and future husband of Time magazine magnate, Henry Luce, with Joseph P. Kennedy, Randolph Churchill, the American financier Bernard Baruch and numerous others is over the top.  In addition, Sarah Churchill’s relationship with Joseph Kennedy’s replacement as ambassador to the United Kingdom, John G. Winant, and of course Maier cannot leave out the dalliances of John F. Kennedy and after a while, I wondered what purpose this information plays, if not just to spice up a historical narrative that should stand on its own merits.

To his credit Maier distills a number of situations that have remained obscure over the years.  Perhaps the most interesting is that of Tyler Kent, a code clerk in the American Embassy in London under Kennedy’s ambassadorship.  Kent was stealing documents and funneling them to a right wing group in England, conservative pro-Nazi politicians, and the Nazi government.  Documents included sensitive communications between Churchill and Roosevelt among others.  Scotland Yard and MI5 surveilled Kent and Kennedy for over seven months.  Once Kent was arrested, Maier, quite accurately describes Kennedy as an inept administrator who worried more about how things affected the “Kennedy Brand” as opposed to the damage the fiasco caused the war effort.  Kennedy would emerge totally discredited, which reinforced FDR’s negative view of him.  Another tidbit that Maier explores is that of Churchill’s health that resulted in two heart attacks and the belief that his son Randolph who surprisingly exhibited tremendous courage despite his reputation needed to be kept in a safe area as not to overly stress his father, since the Prime Minister was a key to holding out against the Nazis until victory.

Maier does a competent job tracing the rise of Jack Kennedy from his election to Congress in 1946 to the presidency fueled by the wealth of his father.  Kennedy Sr. lived vicariously through his second son as he wanted him to gain the respect and success he could never attain.  Though there is nothing new in his discussion of Jack Kennedy’s rise to power, Maier does bring to the fore Churchill’s adamant position visa vie the Soviet Union following the war.  After giving his “Iron Curtain Speech” in Fulton, MO delineating the Soviet threat he would follow up by advocating the use of the atomic bomb against the Russians, taking advantage of the nuclear option before the Soviets developed their own which he was convinced they would employ.  Using little known FBI records, Churchill urged Senator Styles Bridges of New Hampshire, “that if and atomic bomb could be dropped on the Kremlin wiping it out, it would be an easy problem to handle the balance of Russia, which would be without direction.” (433)

Maier provides the reader with interesting portraits of a number of important historical figures.  Chief among them was Max Aiken, or Lord Beaverbrook, a close friend and companion of Churchill, and the senior Kennedy, who at times professed his own agenda.  Other portraits include; Clementine Churchill, the spouse of the Prime Minister, as well as Rose Kennedy.  The English writer Evelyn Waugh, the financier and FDR confidant, Bernard Baruch, Clare Booth Luce, Kay Halle, a beautiful Cleveland journalist who worked with William Donovan at the OSS and at one time was the paramour of Randolph Churchill, George Gershwin, Averell Harriman, the columnist, Walter Lipmann, and Robert F. Kennedy, among others.  FDR and his advisors, particularly Harry Hopkins are portrayed fairly, as are certain important members of the British parliament.  Overall, Maier’s portrayals captures numerous individuals, and the author is even handed in his approach as he presents his breezy narrative.

Maier’s writing is easy to follow and each component of his story seems to flow into the next in a pattern that maintains the reader’s interest.  His story is carried into the 21st century following the death of Senator Edward M. Kennedy, as Maier repeatedly seems to conjecture as to what might have been.  Whatever the case, Maier’s work is quite appealing and should interest those who have questions about two remarkable political dynasties.