Following his victory in the 2008 presidential election Barack Obama chose Hillary Clinton as his Secretary of State.  Many pundits conjectured as to why Obama made this selection.  They argued that he was following the path of Abraham Lincoln by placing his opponents in his cabinet so he could keep an eye on them and control any opposition.  This view is wonderfully presented in Doris Kearns Goodwin’s TEAM OF RIVALS: THE POLITICAL GENIUS OF ABRAHAM LINCOLN, but one must ask could Goodwin’s thesis actually represent Obama’s motivation.  In his new book, ALTER EGOS: HILLARY CLINTON, BARACK OBAMA, AND THE TWILIGHT STRUGGLE OVER AMERICAN POWER Mark Landler, a New York Times reporter compares Obama and Clinton’s approach to the conduct of foreign policy and how it has affected America’s position in the world.  In do so Landler explores in detail their relationship on a personal, political, and ideological level.  Landler delves into the differences in their backgrounds that reflect how they came to be such powerful figures and why they pursue the realpolitik that each believes in.  In so doing we learn a great deal about each person and can speculate on why Obama chose what really can only be characterized as his political enemy throughout the 2008 campaign trail as his Secretary of State.  What is even more interesting is their differences that can be summed up very succinctly; for Obama the key to conducting a successful foreign policy was “Don’t do stupid shit,” for Clinton, “great nations need organizing principles…don’t do stupid stuff is not an organizing principle.”

Since we are in the midst of a presidential election and it appears that Hillary Clinton will be the Democratic nominee it is important to evaluate and understand her approach to foreign relations.  Landler does the American electorate a service as his book is a useful handbook in understanding and getting an idea how she would approach the major foreign policy issues that America currently faces should she assume the oval office.   By comparing her with Obama we gain important insights into her thinking and how she would implement her ideas.  It is clear during Obama’s first term that Clinton was the “house hawk” within his administration as she supported increases in troop deployments to Afghanistan which Obama reluctantly agreed to, but only with a set time limit; she wanted to leave a large residual force in Iraq after American withdrawal which Obama did not do; she favored funneling weapons to rebels in Syria fighting Assad as well as the creation of a no fly zone which Obama opposed; and lastly, she favored the overthrow of Muammar al-Qaddafi and the bombing of Libya when he threatened to destroy Benghazi which Obama reluctantly agreed to.  Their difference are clear, Obama believes that the United States is too willing to commit to military force and intervene in foreign countries, a strategy that has been a failure and has led to a decline in America’s reputation worldwide, a reputation he promised to improve and has been partly successful with the opening to Cuba and the nuclear deal with Iran.  For Clinton the calculated employment of American military power is important in defending our national interests, and that our intervention does more good than harm, especially in exporting development programs and focusing on human rights.  Obama arrived on the scene as a counterrevolutionary bent on ending Bush’s wars and restoring America’s moral standing.  He no longer accepted the idea that the U.S. was the world’s undisputed “hegemon” and shunned the language of American exceptionalism.  Clinton has a much more conventional and political approach, “she is at heart a ‘situationist,’ somebody who reacts to problems piecemeal rather than fitting them into a larger doctrine.”  Her view is grounded in cold calculation with a textbook view of American exceptionalism.

Landler describes the difficulties that Clinton had adapting to the Obama White House that is very centralized in decision-making and she had difficulty penetrating Obama’s clannish inner circle.  The author also does an excellent job explaining the main players in Hillaryland and the Obama world that include Obama’s whiz kids, Denis McDonough and Ben Rhodes, and Clinton’s staffers Jake Sullivan and Huma Abedin.  Since Obama was a self-confident president who had a tight grip on foreign policy, Clinton spent most of her time implementing the strategy set by the White House.  During the first two years of the Obama administration Clinton pursued a global rehabilitation tour to patch up the mess that Bush left.  During her second two years she did more of the heavy lifting on sensitive issues like Syria, Libya, Iran, China, and Israel which Landler dissects in detail.  From her UN women’s conference address in Beijing during her husband’s administration, her lackluster attempts at bringing peace between the Palestinians and Israel, developing and implementing sanctions against Iran, her support for the rebels in Syria, and the overthrow of Qaddafi, we get unique insights into Clinton’s approach to foreign policy.

The fundamental difference or fault line between Obama and Clinton was Clinton’s vote in favor of the invasion of Iraq on October 2, 2002, a vote that Obama opposed as a state senator in Illinois.  Landler does a marvelous job comparing their backgrounds and the influence of their personal experience on their worldview.  Obama’s divided heritage of Hawaii, Kenya, and especially Indonesia defined him from the outset.  For him Indonesia highlighted the ills of the oil companies, western development programs, and American power as it supported repressive military dictatorships to further its Cold War agenda.  Obama was an anti-colonialist and could put himself in the place of third world cultures in his decision-making.  Clinton on the other hand was rooted in Midwestern conservatism and her interests after law school was to try and alleviate poverty and defend the legal rights of children.  Landler is correct when he states that “Clinton viewed her country from the inside out; Obama from the outside in.” 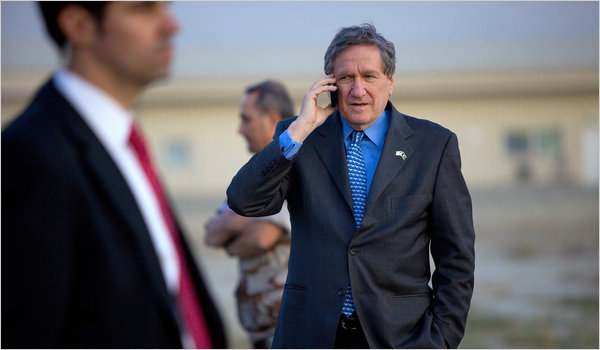 Landler presents a number of important chapters that provide numerous insights into the Obama-Clinton relationship.  Particularly important is the chapter that focuses on Richard Holbrooke, a career diplomat that dated back to Vietnam and ended with his death in 2010.  A swash buckling man who did not fit into the Obama mold was brilliant, self-promoting and usually very effective, i.e., the Dayton Accords in 1995 that ended the fighting in Bosnia.  He hoped as Clinton’s special envoy for Pakistan and Afghanistan to help mediate and bring some sort of closure to the conflict with the Taliban.  Holbrooke rubbed Obama the wrong way and was seen as the epitome of everything Obama rejected in a diplomat and Clinton who had a very strong relationship with Holbrooke going back many years spent a great deal of time putting out fires that he caused.  Another important chapter focuses on administration attempts to mediate the Palestinian-Israeli conflict.  For Clinton it was a no win situation for a person who represented New York in the Senate and planned to seek the presidency on her own.  Obama would force her to become engaged in the process along with special envoy, George Mitchell, and she spent a great deal of time trying to control the animosity between Obama and Israeli Prime Minister Benjamin Netanyahu.  Landler’s discussion of the Obama-Netanyahu relationship is dead on as the Israeli Prime Minister and his right wing Likud supporters represented the colonialism that Obama despised.  For Netanyahu, his disdain for the president was equal in kind.  In dealing with the Middle East and the Arab Spring Clinton argued against abandoning Egyptian President Hosni Mubarak as she believed in the stability and loyalty to allies, Obama wanted to be “on the right side of history,” and in hindsight he was proven to be totally wrong.  These views are polar opposites and helps explain Obama and Clinton’s frustration with each other that form a major theme of Landler’s narrative.

Obama’s drone policy was another source of disagreement between the President and Secretary of State.  For Obama “targeted killings” was a better strategy that the commitment of massive numbers of American troops.  The primacy of employing drones is the key to understanding Obama’s foreign policy.  For Clinton regional stability, engagement, and the United States military is the key to a successful foreign policy.  As Vasil Nasr states, Obama believes that “we don’t need to invest in the Arab Spring.  We don’t need to worry about any of this; all we need to do is to kill terrorists.  It’s a different philosophy of foreign policy.  It’s surgical, it’s clinical, and it’s clean.”

Perhaps Landler’s best chapter deals with the evolution of Syrian policy.  Internally Clinton favored aid to the Syrian rebels which Obama opposed during the summer of 2012.  However, when Obama decided to walk back his position on the “Red Line” that if crossed by Assad through the use of chemical weapons, the US would respond with missile attacks.  Once this policy changed to seeking Congressional approval for any missile attack, the United States gave up any hope in shaping the battlefield in Syria which would be seized by others eventually leading to ISIS.  Obama needed Clinton’s support for this change.  Though privately Clinton opposed the move, publicly at her own political risk she supported the president.  This raises the question; how much difference was there in their approach to foreign policy?  It would appear that though there were differences, Clinton was a good team player, even out of office, though as the 2016 presidential campaign has evolved she has put some daylight between her and the president.  From Obama’s perspective, though he disagreed with his Secretary of State on a number of occasions he did succumb to her position on a series of issues, particularly Libya, which he came to regret.  The bottom line is clear, Clinton kept casting around for solutions for the Syrian Civil War, however unrealistic.  Obama believed that there were no solutions – at least none that could be imposed by the U.S. military.  Another example of how the two worked together was in dealing with Iran’s nuclear program.  They both agreed on the approach to be taken, a two track policy of pressure and engagement.  Clinton played the bad cop enlisting a coalition of countries to impose punishing sanctions while the President sent letters to the Supreme Leader and taped greetings to the Iranian people on the Persian New Year as the good cop!  But, once again they appeared to be working in lock step together.

The question proposed at the outset of this review was whether President Obama chose Hillary Clinton so he could keep her within the “tent” as Abraham Lincoln did.  After reading ALTER EGOS there is no concrete conclusion that one can arrive at.  Even at the end of Clinton’s term as Secretary of State two major diplomatic moves were made; the groundwork that would lead to a restoration of relations with Havana and an opening with Burma took place.  In both cases the President and Clinton were on the same page, therefore one must conclude that though there were some bumps in the road, publicly, Obama and Clinton pursued a similar agenda and  were mostly in agreement.  As a result, it would appear that they are more similar than different and that the “team of rivals” concept may not fit.  It seems the title ALTER EGOS could give way, perhaps to THE ODD COUPLE, a description that might be more appropriate.