The public’s fascination with Adolf Hitler remains strong even sixty years after his suicide in the Fuhrer bunker in April, 1945.  To date over 120,000 books have been written about Hitler and Volker Ullrich’s new biography, HITLER: ASCENT 1889-1939 is a welcome addition to this ever increasing bibliography.  Up until now Ian Kershaw’s two volume work was the recognized standard in this genre replacing earlier volumes by Alan Bullock, and Joachim Fest as the most comprehensive works on Hitler.  Kershaw argued that Hitler was motivated by two obsessions as he pushed Germany toward war; the removal of the Jews, and German expansion to the east.  Overall, Ullrich agrees with Kershaw’s thesis, but what makes his book so important is his ability to synthesize the vast material that has already exists, his access to a great deal of new primary materials, and it has been almost twenty years since Kershaw’s work was published.  Ullrich should be commended for his voluminous research supported by his extensive endnotes.  These endnotes contain a treasure-trove of information for scholars of the Nazi regime, their leaders, and their rise to power. 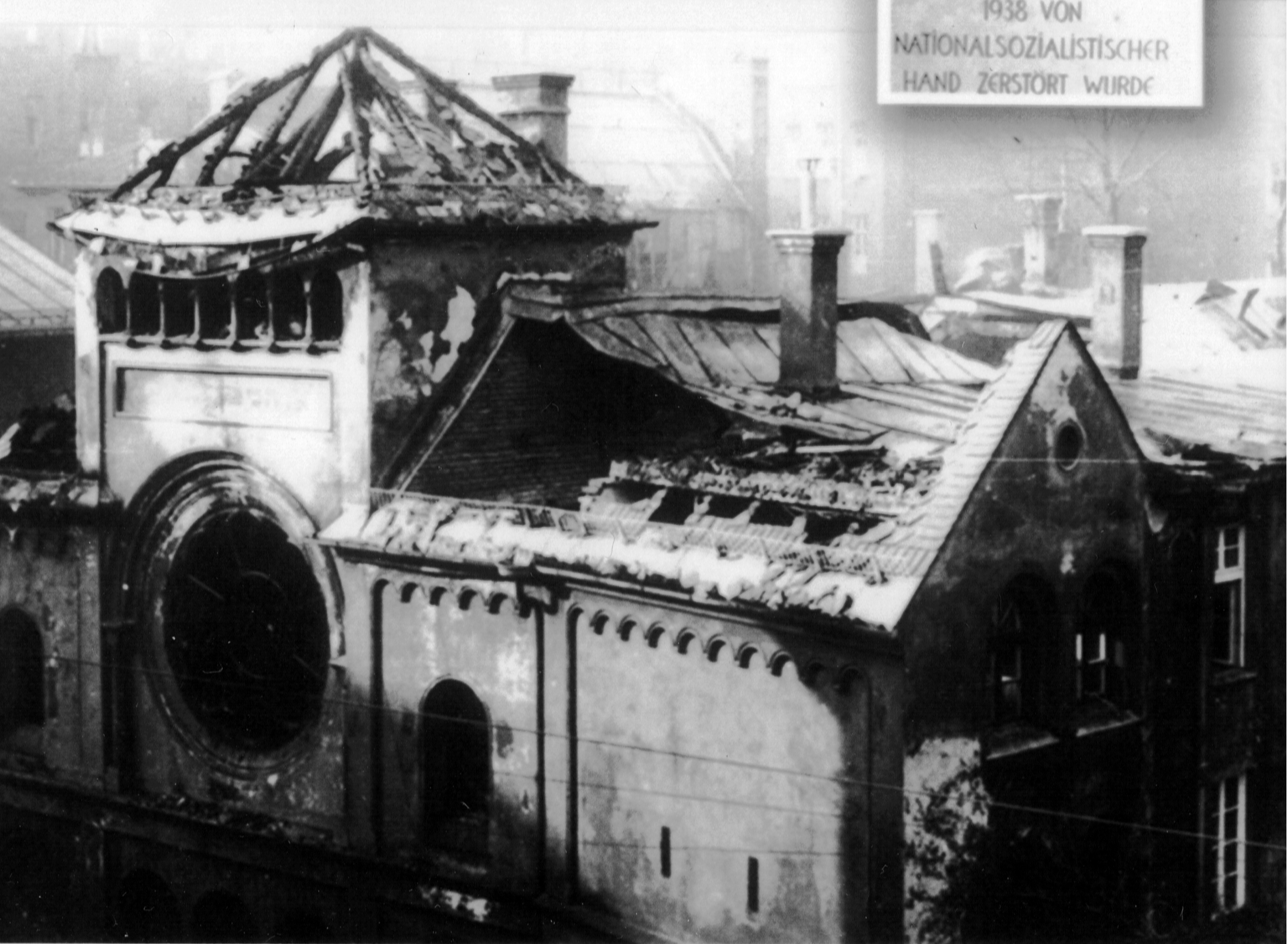 (A burned out synagogue during Krystallnacht, November, 1938)

Many wonder what the keys were to Hitler’s success.  Ullrich correctly depicts a man who was able to conceal his real intentions from friends and foes alike as one of the keys to his success.  He had the ability to instantly analyze political situations and exploit them, including his political opposition.  His success rests on his improvisational style of leadership where he created numerous internal conflicts from which he emerged as the indispensable man.  Ullrich breaks the myth that Hitler lacked personal relationships arguing that he was able to separate his political and private spheres which impacted his pursuit of power greatly.  Another key that Ullrich stresses in understanding Hitler is examining the reciprocal nature of his relationship with the German people that contributed to his enormous popularity.  It was not a forgone conclusion that Hitler would come to power, but domestic opposition leaders underestimated his abilities, as would foreign leaders after he consolidated power in 1934.  Ullrich’s aim “is to deconstruct the myth of Hitler, the ‘fascination with monstrosity’ that has greatly influenced historical literature and public discussion of the Fuhrer after 1945.  In a sense, Hitler will he ‘normalised’—although this will not make him seem more ‘normal.’  If anything, he will emerge as even more horrific.”

Ullrich’s study is extremely comprehensive.  He does not spend a great deal of time concerning Hitler’s childhood and upbringing, just enough to explore a few myths associated with Hitler’s childhood which he debunks, i.e.; he did not grow up in poverty as his father Alois had a good pension; he did not blame the Jews for the death of his mother from cancer; and he did not blame the Jews for his inability to be admitted to the Academy of Fine Arts  The biography becomes detailed as the Ullrich explores the effect  Fin-de-Siècle Austria on Hitler and the author does an excellent job reviewing the historiography pertaining to Hitler’s intellectual development.  Hitler is presented as an autodidact who was self-educated which explains how he acquired his anti-Semitic prejudices and German nationalist ideas.  But it is Hitler’s experience in World War I that shaped the man, without which he would have remained “a nobody” with pretensions of being an artist.

(Adolf Hitler with his second in command, Hermann Goering)

Ullrich’s work successfully shifts the focus of his study on to Hitler the person as is evidenced by an excellent chapter, “Hitler the Human Being.”  It is here that Ullrich delves into Hitler’s behavior and personality and tries to lift the mask that makes it difficult to penetrate Hitler’s shifting persona.  Hitler’s personality is a compilation of dichotomies.* He was a dictator who kept people at a distance, but sought company to avoid being alone with himself.  He could be caring and empathetic at times, but at the same time he could commit or order brutal acts.  Ullrich is correct in pointing out that Hitler was an actor and chameleon who was able to manipulate others who did not see through him as he overcame his personal insecurities and was able to shift many of them on to the German people in order to seize power.

Other important chapters include “Month of Destiny: January 1933,” where Ullrich details Hitler’s path to the Chancellorship by taking the reader through the numerous elections, the strategies pursued by Hitler and his cohorts, the approach taken by the opposition, and the political infighting on all sides of the political spectrum.  January 30, 1933 became the turning point in the history of the twentieth century, but at the time Ullrich correctly points out leaders and the German public were not totally aware of its significance because most power brokers believed that the Franz von Papen-Paul von Hindenburg-Alfred Hugenberg alliance would be able to control Hitler.  As is repeatedly pointed out in the narrative it was just another example of people underestimating the new German Chancellor.  When examining if there were opportunities to stop Hitler’s ascent, Ullrich recapitulates the ideas of Karl Dietrich Bracher’s THE GERMAN DICTATORSHIP published in 1972.  Further, no one should have been surprised by Hitler’s actions after he rose to power, because his speeches, other public utterances, and his book MEIN KAMPF carefully delineated what he proposed to do.

In the realm of what he did do it is carefully reconstructed in the chapters, “Totalitarian Revolution,” and “Eviscerating Versailles.”  After achieving power on January 30, 1933 over the next year we witness the Nazi consolidation of power through the creation of the first concentration camp at Dachau; the passage of the Enabling Act, or “The Law to Remedy the Distress of the People and the Reich,” which was used to create a dictatorship in the hands of the Chancellor as Hitler could now formulate laws without the approval of the Reichstag; and lastly, The Night of the Long Knives which destroyed the SA and the last vestige of political opposition.   As far as Hitler’s foreign policy was concerned the enemy was the Bolshevik-Jewish conspiracy and the key to its destruction was the step by step dismantling of the Treaty of Versailles.  Ullrich takes us through this process and the tactic Hitler employed throughout the period was to simultaneously appear as conciliatory and presenting his adversaries with a fait accompli, i.e., German military rearmament and the occupation of the Rhineland in March, 1936.   The response of the west was one of appeasement and Hitler recreated a strategy that worked so effectively domestically – implementing policy that fostered foreign diplomats to underestimate him.   Overall, there is little that is new in this part of the narrative, but Ullrich’s clear analysis and Jefferson Chase’s excellent translation make events and policies easy to understand, particularly the historical implications that would result in World War II.

After reading Ullrich’s narrative I am not certain he has met his goal of “humanizing” Hitler because no matter how the material is presented he remains the historical monster that his actions and belief system support.  To Ullrich’s credit he has written a carefully constructed biography that should be seen as the most comprehensive biography of Hitler to date, and I look forward to the second volume that will carry us through the end of World War II.

*To explore Hitler from a psychological perspective you might consult:

Binion, Rudolph. HITLER AMONG THE GERMANS