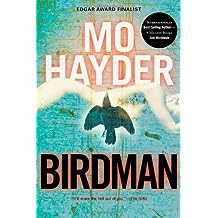 Mo Hayder’s, BIRDMAN introduces us to her new character Jack Caffery, a Detective Investigator with the London police department.  Almost immediately Caffery is confronted with a strange murder as a body is found in the Millenium Dome in southeast London.  Once the police respond and excavate the site they locate four more bodies, and the possibility they are dealing with a serial killer.

Jack Caffery is a very complex individual who is haunted by the childhood disappearance of his brother, Ewan.  When he was eight he and Ewan were playing in a tree house when they got into a fight and his brother ran away never to be found.  A pedophile lived in their neighborhood, but nothing could be proven that he was involved.  Jack’s mother blamed him and their relationship was ruined.  Later as an adult Jack’s parents were happy to sell him his childhood home that brought him close to his neighbor, John Ivan Penderecki, the suspected pedophile.  Even in adulthood Jack carried the guilt of his brother’s disappearance with him each day.  His work as a detective always seemed conducted with Evan in the background.

In addition to his guilt over Evan, Jack is involved with a woman named Veronica who is in remission from Hodgkin’s disease, but after six months he wants to call it quits, when she tells home the cancer is back.  She uses the disease as a ploy to keep Jack until one day he learns the truth.  With all of this baggage, Jack is trying to solve multiple murders.  Jack is convinced that the murderer is white with a medical background.  Since the crime scene was near a hospital it all seemed to fit in place except for the fact that a racist colleague pushes a black drug dealer as the perpetrator.  Jack is now in a race with an incompetent colleague for evidence and wastes a great deal of time.

Hayder does an excellent job developing her characters, particularly Toby Harteveld, a former medical student who has inherited an enormous amount of wealth from his parents.  His problem is a sick mother who mentally abused him as a child.  Another important character is Rebecca, an artist who rooms with Joni Marsh who knew all of the victims.  The problem is that Jack becomes emotionally involved with Rebecca which influences his investigation.

Hayder builds her plot very carefully and about half way through the story she recalibrate her approach drawing the reader further into to her web.  Out of the blue a neighbor begins to hear things, but she is the type who complains to the police each Monday morning so she is ignored.  Jack continues his race with a colleague who is bent on prosecuting an innocent man.

Hayder does an exceptional job integrating Jack’s private life and his own demons into  the story.  She has a very empathetic approach that makes her characters very real as they try and cope with everyday issues as the hunt for the killer progresses.

When all seems to be coming together, Hayder introduces a diabolical twist that at once brings disgust, but also a curiosity of how two murderers came together as partners in a pact of perversion, and how their crimes would finally be solved.  I must warn that there are a number of scenes that are not for the squeamish and can be very troubling.  Their inclusion is important in understanding the murderers and what the police were up against.

Since this is Hayder’s first Jack Caffery novel which captures the imagination in a crisp and somewhat harrowing manner I am looking forward to others in the series.  Hayder’s provides a chilling narrative at times, but also a sensitivity to the plight she places her characters in.  For me Mo Hayder is now on my watch list.