(the evacuation from Dunkirk)

A few days ago I saw the film “Dunkirk” which attempted to convey the importance of the rescue of 338,000 men off the coast of France across the English Channel in late May and early June, 1940.  The film does an excellent job presenting the plight of British and French troops as they lined up on the beaches to be extracted from the threat of German tanks, artillery, soldiers and bombers.  What the historian, Walter Lord refers to in his classic study, THE MIRACLE OF DUNKIRK is a series of crises that allowed many components of British society to take part in the rescue of these men.  Though originally published in 1982, Lord’s book has lost none of its punch and command of events that led to the evacuation, the evacuation itself, and its implication for the overall war effort.  When reading Lord’s work today it still reflects a historian who had mastered the craft of narrative history and allowed the reader to take part in the action being described. 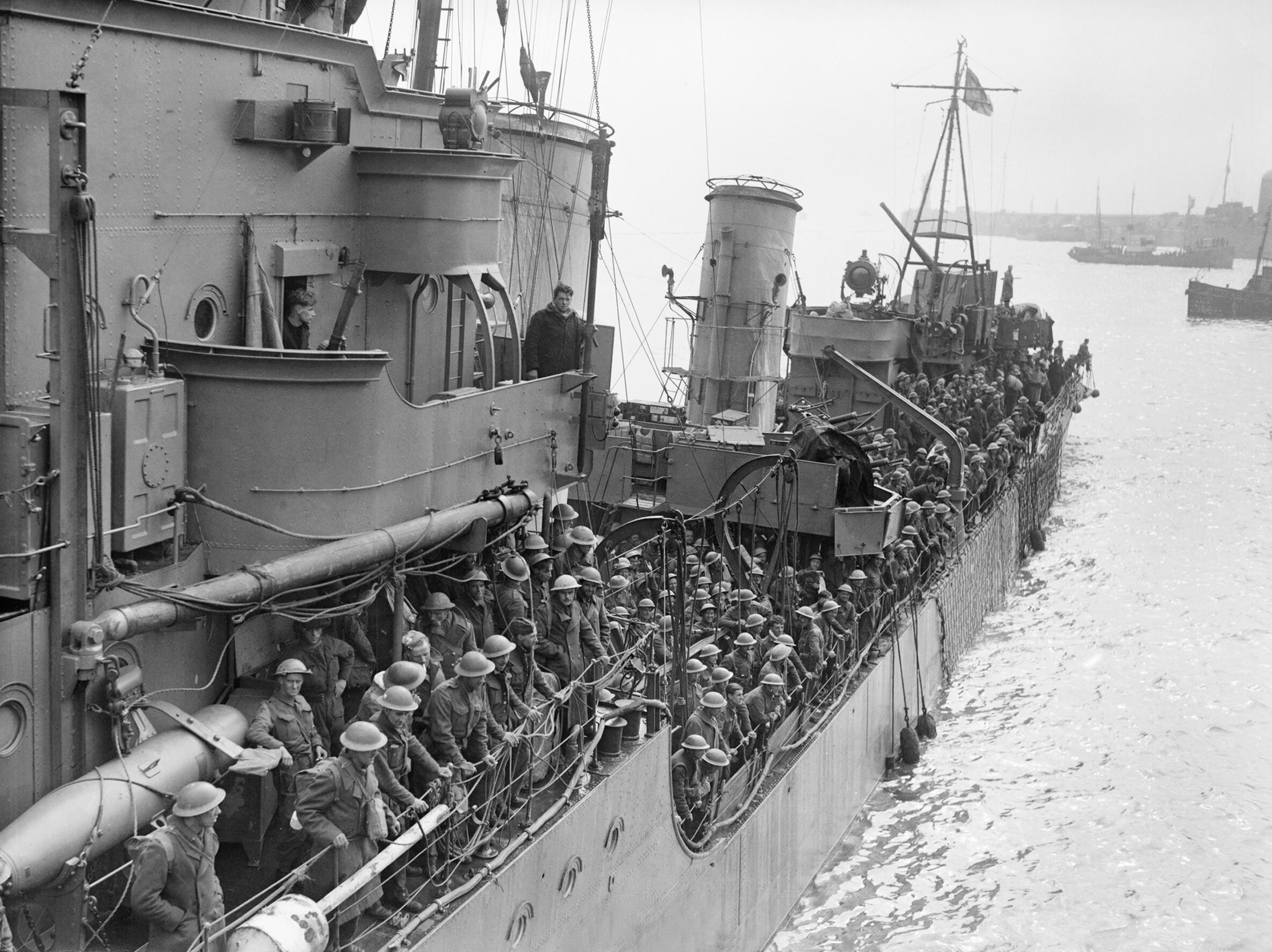 The approach taken in the film is reflected in Lord’s work.  It presents three important elements of the rescue; the outnumbered  brave British pilots who met and tried to neutralize German Stukas, the employment of anything that would float represented by a family fishing boat, and the men stuck on the French beaches trying to survive German bombing.  All aspects help capture the bravery, spirit, audacity of the British people that allowed them to save their army – an achievement that would go a long way in finally defeating the Nazis five years later.

Having seen the film I decided to read Lord’s highly readable study of what occurred.  Events in France shocked many, particularly Prime Minister Winston Churchill who was informed early on the morning of May 15, 1940 by French Premier Paul Reynaud that the French had been defeated after the Germans surprised them by attacking through the supposedly impenetrable Ardennes Forest.  German Panzer Divisions poured through the French countryside trapping the British Expeditionary Force (BEF), two French armies, and all Belgium soldiers, nearly one million men pinned against the sea at Flanders. Lord does a superb job describing British resiliency as they tried to block the German advance at the same time they instituted a massive withdrawal to save the BEF.  Lord points out French arrogance in dealing with the British, how quickly their troops and leadership became demoralized, and how the British were confronted with French “invisibleness” as they tried to cope with the German advance.  British policy seemed to always have to take in to account the French state of mind.  Once the French had given up, the BEF command had to prod them to hold certain areas so an escape route could be protected.  Further, the French felt they were not being treated equally once the evacuation began to gather steam.  They wanted the use of British ships and equal extraction of soldiers.  Churchill was very cognizant of French sensitivities as he was afraid of losing an ally at a time when things were becoming desperate.

Once the Germans realized what was occurring as the BEF and its allies began retreating north they worked to close off any access to French ports, be it Boulogne, Calais, and Dunkirk.  The Germans were spreads very thin and were stunned the allies did not attack their flanks as they raced for the beaches.  Luftwaffe head, Herman Goring grew jealous of Heinz Guderian’s Panzer unit and pleaded with Hitler to halt the German advance and allow his air force to complete the job of wiping out the BEF.  Hitler was concerned about his armor and viewed Paris as his main target so he went along with Goring.  This decision was very telling as it gave the BEF three days to organize its retreat before Hitler changed his mind – probably creating the opportunity for the “miracle” at Dunkirk.

Perhaps Lord’s best chapter, “Operation Dynamo” deals with how the Admiralty bureaucracy organized the diversified types of ships and crafts that would take part in the rescue of the BEF.  On May 14, 1940 the BBC called for “all owners of self-propelled pleasure craft between 30 and 100 feet in length to send all their particulars to the Admiralty within fourteen days.”  Lord provides intricate details how this miracle at sea was organized under the leadership of Vice Admiral Betrum Ramsay who was located deep in the White Cliffs of Dover.  The result was a “strange fleet of ferries, hoppers, dredges, barges, coasters, and skoots.”  Once Boulogne and Calais fell, Dunkirk was the only option.

What sets Lord’s work a part from others is how he integrates the private stories and individual experiences of the soldiers and civilians who came to their rescue during the evacuation.  The harrowing trip across the channel and back avoiding German mines and bombers, placing the reader with the heroic individuals Lord describes.  Lord presents a number of important personages in his narrative that include King Leopold III of Belgium who quickly surrendered to the Germans, General Bernard Montgomery who organized his troops to fill the gap in the BEF escape route, and General Gort (Viscount Lord) who was in charge of BEF at Dunkirk, among others.  In addition, Lord has interviewed numerous survivors, civilians, and officers whose personal experiences helped create a fascinating narrative that began with a disorganized movement of troops onto the beaches, the need to create a pier to allow ships to pick the men up, and organizing the men into small units that would make for an efficient extraction.  What resulted at times was “bewildered waiting” and trying to avoid being hit by German bombers.

The British command also had to make important choices as a number of destroyers dispatched to evacuate men began to be sunk.  Churchill and company were concerned that the losses were too much in light of what they thought would be a long war.  At one point a number of destroyers were withdrawn.  What facilitated the evacuation was low cloud cover and smoke for a good part of the end of May, 1940.  As the Admiralty withdrew the destroyers the void was filled by car ferry’s, fishing boats, open motor launches, barges, cabin cruisers, trawlers, and rusted scows – ships/boats of every conceivable type.  By the end of May, it became a deluge of “little ships.”  These craft were mostly unarmed and many were piloted by everyday civilians, a number of which were on their maiden voyage with little knowledge of nautical equipment.  The ingenuity of the British was seen as troops cannibalized materials from wherever they could, be it partially sunken destroyers, damaged buildings etc. all to create a temporary pier or mole so rescue boats could come astride and extract as many men as possible.

By the end of the evacuation 224,686 of the BEF and 123,095 French soldiers were evacuated.  This would be a problem for Churchill for the remainder of the war as the French believed that the British did not do their utmost to save French soldiers. Lord also does a marvelous job detailing the intricate and frosty relationship between England and France, especially as the Germans began to turn their attention away from Dunkirk and moved their panzer divisions to conquer Paris.

The significance of the evacuation lay in the large number of British troops that were saved.  Guns and vehicles could be replaced, but not the only trained troops that Britain had left.  It would form a nucleus of the great allied army that would win back the continent.  Further, leaders such as Lt. General Alan Brook, Major-General Harold Alexander, and Major-General Bernard Montgomery “all cut their teeth at Dunkirk.”  In addition, the evacuation electrified the British people and gave them a sense of purpose that the war previously lacked.  It was an opportunity for ordinary citizens to feel they had made a direct contribution to the war effort.

Lord has written a highly readable account of the rescue of allied forces from Dunkirk.  An accomplishment many historians credit for saving Britain from being forced out of the war with Germany.  Though written and researched over thirty five years ago it still stands as the best narrative of the rescue and provides numerous insights into the mindset of the hundreds of thousands who survived the Nazi onslaught in the late spring of 1940.

(the evacuation from Dunkirk)