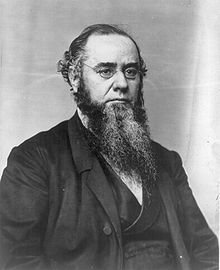 When one thinks of impactful figures in American history few would come up with the name, Edwin M. Stanton.  However, without Stanton the North would have had a much more difficult time defeating the South in the Civil War, the night Abraham Lincoln was assassinated someone else would have had to step forward to round up the conspirators and capture John Wilkes Booth and Jefferson Davis, and perhaps Andrew Johnson might not have been brought before the Senate for an impeachment trial.  Lincoln’s Secretary of War is the subject of Walter Stahr’s latest biography, STANTON: LINCOLN’S WAR SECRETARY, a smartly written, intimate, and incisive portrait of Stanton’s role in the Civil War and American history in general.  As he did in his previous biographies of John Jay and William Seward, Stahr has mined the available sources reaffirming many of the standard opinions of his subject, but also evaluating new sources and developing new perspectives.

Born in Steubenville, Ohio in 1814 Stanton was raised near the dividing line between the slave and non-slave states of Virginia and Ohio in a period when abolitionism was beginning to take root.  Stanton would attend Kenyon College, but never graduate.  He went on to study law under the auspices of a Steubenville attorney, Daniel Collier and began his practice of law in the spring of 1837.  Soon Judge Benjamin Tappan, a staunch Democrat would become his law partner and mentor.  At this point in time Stanton grew increasingly interested in politics in large part due to the depression that would last over five years.  Stanton’s involvement in Democratic Party politics increased and he was soon elected Prosecutor for Harrison County, Ohio.  Judge Tappan would soon be appointed to the US Senate and Stanton was well on his way as a partisan Democrat developing a “no holds barred” approach to politics.

Stahr has full command of primary materials as he repeatedly points out what documents pertaining to Stanton’s views were available and those that were missing.  This allows him to compare diverse viewpoints and sources to determine what Stanton actually wrote, said, or acted upon during his law and political career.  Stahr attacks the many myths associated with Stanton and he does his best to straighten out discrepancies in the historical record.  In Stahr’s study we follow the evolution of Stanton from an important member of the Ohio Democratic Party to becoming the cornerstone of Lincoln’s Republican administration.  During this later process, in particular, we witness the liberalization of Stanton’s views dealing with race.

Stanton’s personal life was wrought with tragedy leading to a strong sense of religiosity.  As a boy he would lose his father, a brother would commit suicide, and a sister would pass at a young age.  Further, in March, 1844 he would lose his first wife to tuberculosis and during the war years he would lose his infant son James.  These experiences made him appear decidedly older than he actually was.

Stahr correctly stresses that though he was known for his service to a Republican president, Stanton was a staunch Democrat who had supported Martin Van Buren as President, and later James K. Polk’s annexationist policies.  Though he had a very low opinion of James Buchanan whose presidency directly preceded the Civil War, he did not think that highly of Abraham Lincoln either during the pre-war period.

An area that Stahr should have developed much further were Stanton’s views on race and abolitionism.  The author seems to skirt these issues and based on his later beliefs an earlier intellectual roadmap for Stanton’s thinking is warranted.  In Stahr’s defense,  he does give the appropriate amount of attention to Stanton’s views and handling of the use of blacks as soldiers in the union army and what prerequisites it demanded and how it would be implemented, especially the Freedman’s Bureau.  Further, the care and treatment of former slaves is examined and the reader gains a more complete picture of where Stanton stood on these issues especially constitutional amendments.   Stahr does spend an inordinate amount of time detailing Stanton’s legal career, seemingly case by case ranging from the Pennsylvania v. Wheeling and Belmont Bridge case arguing that the bridge blocked commerce on the Ohio River designated for Pittsburgh, to land cases in California, patent claims, labor riots, medical body-snatching, death from duels, and electoral chicanery.  Stanton would argue many cases before the Supreme Court, and many thought he was the leading lawyer of the period.

One of the strengths of Stahr’s effort are his descriptions of American society, culture, and geography in areas in which Stanton lived and influenced.  Stahr provides numerous insights particularly concerning California in the 1850s where he argued numerous land claims, and Washington DC before, during, and after the Civil War.

Stahr stresses how Stanton seems to always claim the moral higher ground no matter the situation.  It is difficult to sustain that approach by supporting the weak President Buchanan and the corruption that surrounded him.  Stanton became a member of the Buchanan administration because of his legal work and with a few months remaining in office Buchannan appointed Stanton Attorney-General.  The most important issue that was at hand was whether to supply Fort Sumter after South Carolina seceded.  Buchanan’s cabinet was split by secessionists and those loyal to the union, and Stanton did his best to stiffen Buchanan’s back and get him to support resupply.  Once out of office Stanton’s view of cabinet meetings stressed positions that Republicans would support as a means of strengthening his position with Lincoln.  Stahr is on firm ground as he argues that Stanton’s view of Lincoln at this time was not much better than Buchanan.  Stahr quotes Stanton’s letter to Buchanan after Lincoln assumes office, “the imbecility of this administration.… [is]…. a national disgrace never to be forgotten….as the result of Lincoln’s ‘running the machine’ for five months.”  Stanton’s bonifides are also to be questioned as he was close with General George McClellan and seemed to share the same views.  It appeared too many inside and outside the press that they were “confidential friends.”  Simon Cameron as Secretary of War advocated arming slaves which McClellan abhorred.  With Congress upset over the course of the war by January, 1862 it should not have come as a surprise that Cameron would be fired.  What was surprising is that Lincoln chose Stanton as his replacement.

Stahr is accurate in his assessment that Lincoln chose Stanton because of his organizational ability, his workaholic approach, and his ability to get things done.  Critics, particularly the northern democratic press pointed to Stanton’s extensive use of military commissions that tried civilians for military offenses, suspension of habeas corpus, and cutting telegraph privileges to opposing newspapers.  These criticisms of Stanton must be weighed against the crucible of war since the Militia and Conscription Acts did deprive numerous individuals’ due process and civil rights.  But one caveat to Stanton’s record on civil rights were the virulent attacks on the Secretary of War which a good part of the time were unmerciful.

Stahr does a workmanlike job reporting on the McClellan-Lincoln/Stanton imbroglio.  McClellan’s ego is explored in detail and the author makes excellent use of the available correspondence.  Stahr performs equally as well in detailing Stanton’s relationship with other generals including; Grant, Sherman, Hooker, Halleck, Meade, and Burnside.  The Stanton-Lincoln relationship is analyzed and the author like many historians before him concludes that personalities and demeanors may have been opposite in many cases, but as A.E. Johnson, Stanton’s private secretary wrote “they supplemented each other’s nature, and they fully recognized the fact that they were necessary to each other.” Stahr does a commendable job revisiting the Andrew Johnson-Edwin Stanton relationship and the deterioration that led to Johnson’s trial in the Senate.  As with other examples in the book this aspect is well documented and the “large” personalities and issues involved are careful dissected.  The result is that Stahr has captured the essence of Stanton as a man who could be deceitful, arbitrary, capricious, as well as vindictive.  However, he was a superb Secretary of War who galvanized Union forces as well as President Lincoln with his energy, organizational skills, ability to learn and adapt, and overwhelming will to defeat the south.  Stahr characterizes Stanton as the “Implementer of Emancipation,” as opposed to the “Great Emancipator,” that was Lincoln.  But for all intents and purposes Stanton must be seen as the equal to Lincoln and Grant in earning accolades for their work during the Civil War.