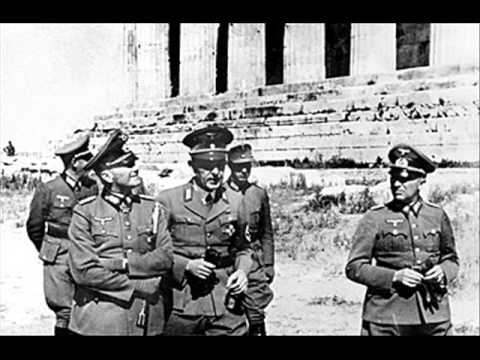 (Nazis in front of the Parthenon during WWII)

In Philip Kerr’s thirteenth installment of his successful Bernie Gunther series we find the former Nazi/German detective living in Munich under the assumed name Christof Ganz working as a “mortuary attendant,” which Gunther viewed as an acceptable form of penance based on what he had done during the war.  Gunther’s soul had been poisoned between 1933 and 1945 and since that time he has done his best to maintain a sense of humanity by assuming different names and occupations.  GREEKS BEARING GIFTS is centered in Germany and Greece and has all the characteristics of other Gunther books including the protagonist’s sharp wit, sense of history, sarcasm, and a degree of empathy that one might not expect based on his background.  In the current rendition Kerr seems to go a bit further dealing with Gunther’s past to the point that at times it becomes a philosophical discourse on Nazism and what Germans can do to assuage their conscience.  Sadly, the author passed away on March 23rd, but the series will continue as number fourteen will be published posthumously sometime next year.

Kerr immediately involves Gunther in a convoluted plot encompassing a corrupt and somewhat sadistic “Criminal Secretary” in the Munich Police Department.  The man recognizes Gunther from his Kripo detective days in the early 1930s and coerces him to join him in a sting to steal a large political donation.  Gunther is able to disentangle himself from the situation and warns the “stings” victim, a lawyer named Max Merten about what was about to occur.  Merten is grateful and arranges a new job for Gunther at a large insurance company, Munich RE as a claims adjuster, a position that could maximize his detective skills as both types of positions involve determining whether people are lying.  Once Gunther begins his new job the plot begins to unfold.

Munich RE, is the largest insurance company in Germany that in the past had insured concentration camps for the Nazis.  Headed by its Chairman, Herr Alois Alzheimer, and his assistant Herr Philipp Dietrich, both former SS members, two gentlemen whose only concerns are company profits.  They both take a shine to Gunther as he immediately solves a case whereby saving the company 23,000 reischmarks.  Having proven himself, Gunther is dispatched to Greece to deal with an insurance case involving a fire on the research boat, the Doris.

Throughout the novel, Kerr makes constant references to Nazi figures and crimes against humanity.  Employing Gunther’s sardonic wit, the author fills in a great deal of background pertaining to our protagonists Nazi past.  Kerr as usual presents numerous historical characters and events that are true to form.  His discussion of Konrad Adenauer’s background is completely accurate, as is his discussion of the port city of Salonika.  Kerr points out that the city held the largest Jewish population than any other area in Europe aside from Poland.  In 1939, Greece held  60,000 Jews, at the end of the war only 2,000 returned, one of which was Jaco Kapantzi a rich Salonikan Jew killed by the SD.

Kerr effectively weaves a number of characters and plot lines in developing his story.  Gunther finds himself in the midst of a number of homicides once he arrives in Greece.  The first is the deaths of Munich RE policy holder, Siegfried Witzel, and Dr. Samuel Frizis, a Jewish lawyer.  Gunther’s presence at the murder scene creates an awkward situation as he is caught by Lt. Stauros Leventis, a Greek detective who is very sensitive about “former Nazis.”  The two agree to work with each other to try and figure out whether the killings and the boat fire are revenge killings by Jews for property stolen during the war or something more devious like the presence of Alois Brunner an escaped Austrian Schutzstaffel officer who worked as Adolf Eichmann’s assistant. Brunner is held responsible for sending over 100,000 European Jews to ghettos and internment camps in Eastern Europe and it seems Gunther may have run into him at his hotel.  Further, Leventis believes he murdered Jaco Kapantzi during the war.  With a “community of fate” the two detectives, one Greek, one German are forced to reach an accommodation and work with each other.

Kerr introduces an interesting group of characters, some true historical figures, some fictional; especially Alzheimer and Dietrich; Achilles Garpolis, a Munich RE employee in Greece who assists Gunther; Witzel who turned out to be a rather sour German; Elli Panatoniou, a government ministry lawyer, communist, and an enigma to Gunther; the lady from H’Mossad, known as the “bandit queen,” or Rahel Eshkenazi, a  Auschwitz survivor; and Lt. Leventis whose sense of morality is quite striking and believes that Gunther should help atone for German sins from WWII by working with him.  Gunther’s dilemma is that he is trying to stay away from his Nazi past because he was living under a false identity.

Kerr’s latest takes a number of twists and turns that will keep the reader fully engrossed.  Kerr proposes a number of possible plot lines as Gunther tries to determine the motives for the murders he has discovered.  From Jews seeking revenge from the Holocaust to the possibility that Greek and Egyptian antiquities were being sold to raise money for Egyptian President Gamal Nasser to purchase weapons to be used against Israel.  His entertaining approach to crime solving is on full display and this effort is one of his best.  As an avid reader of the Bernie Gunther series his death will deprive myself and his readers many hours of enjoyment.  There is one consolation, in that a fourteenth iteration is due out next year, and if it continues were the current story leaves off, it should be fascinating.

(Nazis in front of the Parthenon during WWII)