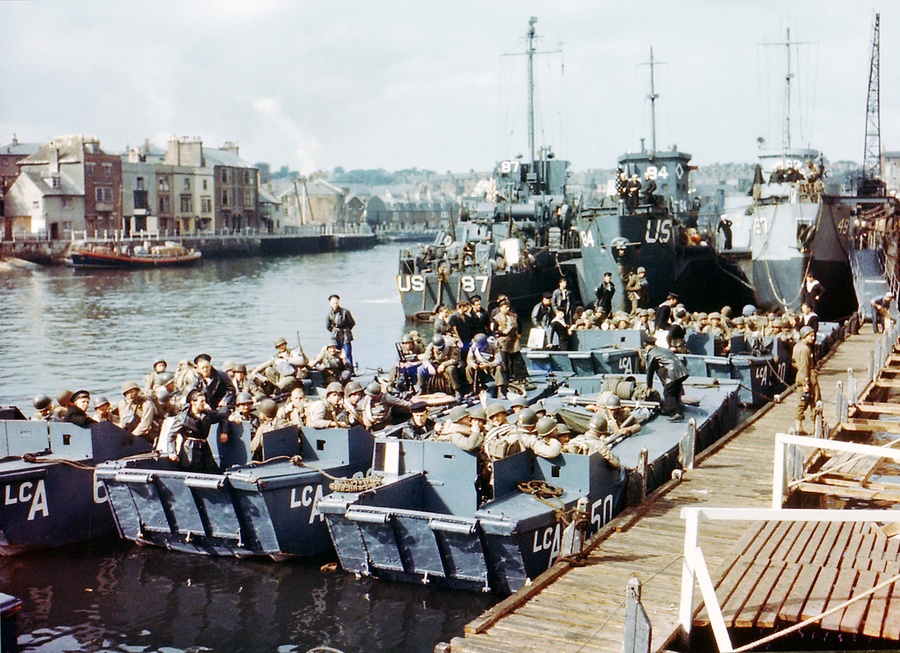 Next month will be the 75th anniversary of the allied landing in Normandy.  As with most major historical commemorations people will flock to the beaches off the French coast.  In addition, the anniversary has produced a plethora of new books to go with the classic works that have been written in the past, including;  Cornelius Ryan’s THE LONGEST DAY, Max Hasting’s OVERLORD,  John Keegan’s SIX ARMIES IN NORMANDY, Carlo D’Este’s DECISION IN NORMANDY, Anthony Beevor’s D DAY and Stephen Ambrose’s D DAY:JUNE 6TH 1944.  New books published in the last two months include COUNTDOWN TO D DAY: THE GERMAN PERSPECTIVE by Peter Margaratis, NORMANDY ’44: D DAY AND THE EPIC 77 DAY BATTLE FOR FRANCE by James Holland, SAND AND STEEL: D DAY AND THE LIBERATION OF FRANCE by Peter Caddick-Adams, THE FIRST WAVE:THE D DAY WARRIORS WHO LED THE WAY TO VICTORY IN WORLD WAR II by Alex Kershaw, and SOLDIER, SAILOR, FROGMAN, SPY, AIRMAN, GANGSTER, KILL OR DIE: HOW THE ALLIES WON ON D DAY by Giles Milton.  For this review I will focus on Milton’s new narrative.  What sets the book apart from the others is that he approaches events from a different perspective by focusing on the stories of survivors from all sides including; a teenage Allied conscript, the crack German defender, and the French resistance fighter among many others.  It is important to remember that each book mentioned has made an important contribution to the growing historiography related to the allied landing in June 1944. 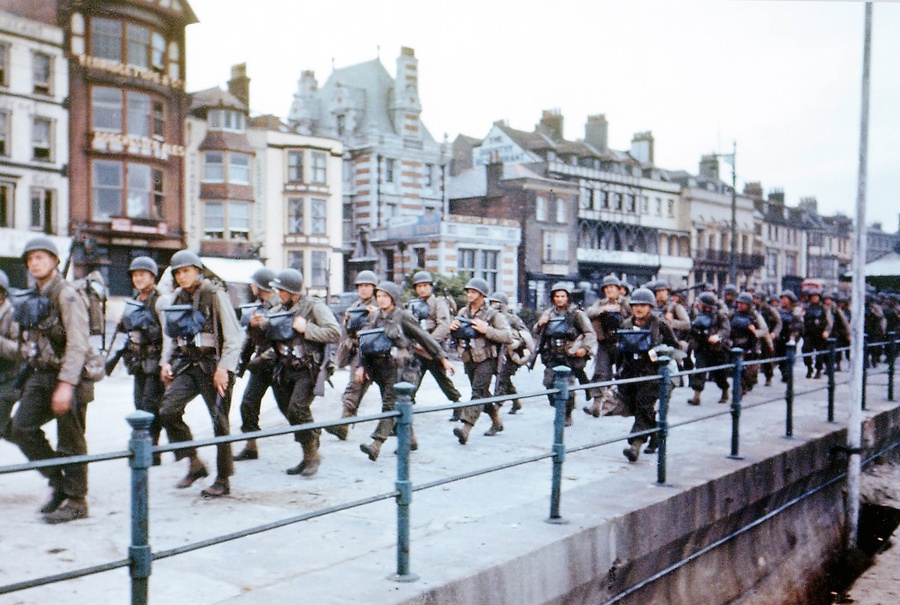 (US troops bound for Omaha Beach)

Milton’s approach is very anecdotal as he introduces numerous characters.  Some are important historical figures like General Dwight David Eisenhower, the Supreme Allied Commander, General Omar T. Bradley, the most senior American commander at D-Day, and Nazi Field Marshall Erwin Rommel who Hitler placed in charge of preparing and thwarting any allied invasion across the English Channel.  The strength of Milton’s book is how he conveys the experiences of allied soldiers who bore the brunt of the carnage and eventual success of the invasion, but also French civilians who were caught in the crossfire between allied bombing and German artillery.  In addition, Milton gives voice to many individuals who have not been heard before; the Panzer Commander’s wife, the chauffeur to the General Staff, women who worked in in Southwick, the nerve center for Operation Overlord, and those teenagers forced into service as nurses at Portsmouth caring for German prisoners of war. 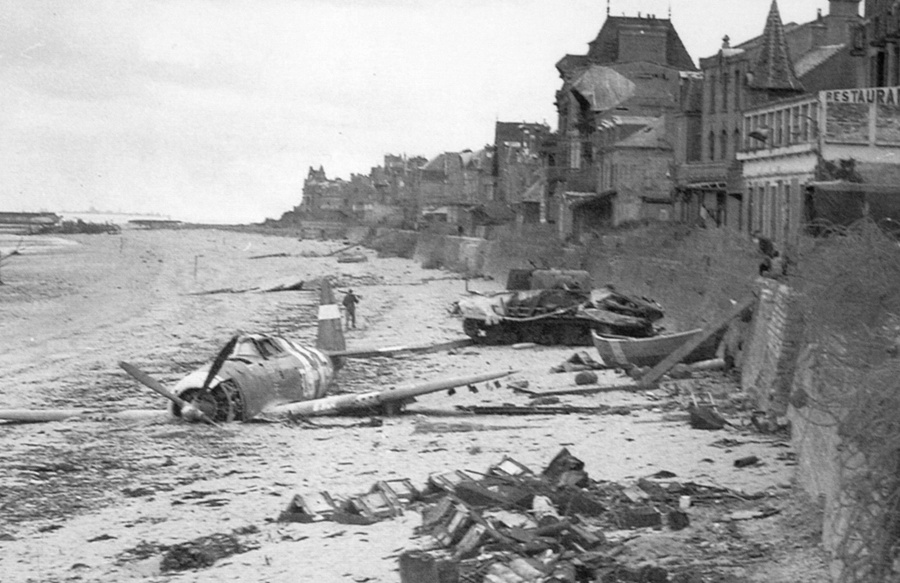 The narrative explores the difficulties in organizing such a massive undertaking that involved transporting 23 million acres of material across the Atlantic, 6939 vessels including 4000 landing craft,  200,000 service personnel, and close to 10,000 aircraft.  Milton has an excellent eye for detail be it weather forecasting, the personalities involved, the strategies employed by both sides, and in particular those stories that we do not necessarily think of when examining the insanity of war.  In this case Milton describes the experiences of paratroopers behind German lines who wound up caught in trees serving as a shooting gallery for German snipers, the mission of Howard Vander Beek who commanded an LCC 60, a small boat designed to lead American safely toward the beaches, or Wally Blanchard, an eighteen year old frogman whose job was to defuse the minefield that Rommel’s forces laid in front of Gold beach. 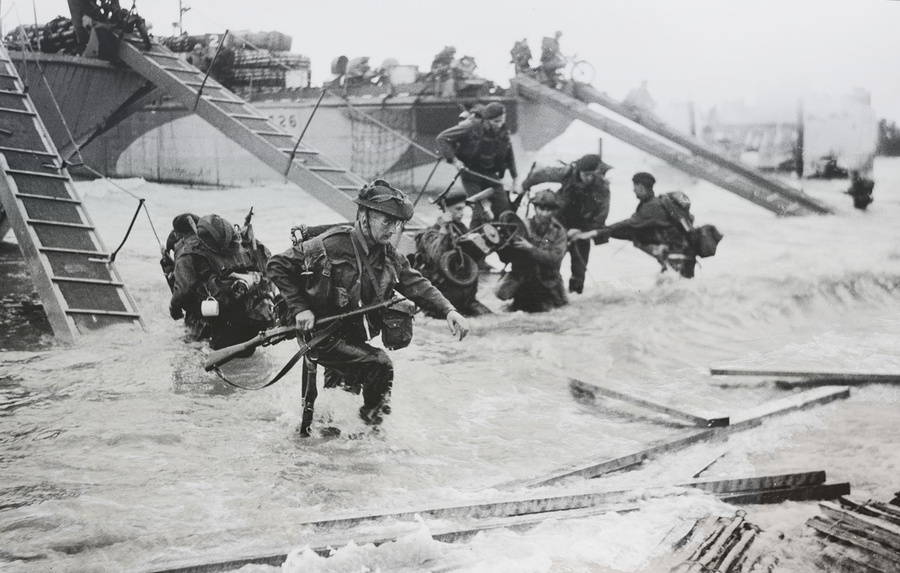 (The British landing at Juno Beach)

Milton’s work is chocked full of stories of heroes, individual acts of courage, and remarkable examples of bravery on the part of allied soldiers as they confronted Rommel’s Atlantic Wall as they hit the beaches and were subject to German artillery and mortars.  It was of immense importance that the German guns be knocked out so the landing zones could be built up to support the invasion.  Men like James Rudder, and his unit would be successful in knocking out the big German guns situated on top of Pointe du Hoc where six 155mm cannon could lob huge shells a distance of 25,000 meters covering Omaha and Utah beaches.  Others include  General Norman “Dutch” Cota and Colonel Charles Canham would help break the deadlock that existed on Omaha Beach, or Simon Fraser, a Highland Chief and the 15th Lord Lovat, “the mad bastard” would lead his men to link up with John Howard, an Oxford shire policeman’s unit to save the Benouville Bridge that was a key to allied advance after the landings.  The stories that Milton conveys are chilling as events unfolded on June 6th, as death became a game of chance.  The author points out that “for most the landings were petrifying, for a few it was intoxicating.”  The vivid description of death is difficult to deal with at times and in the end 37,000 allied soldiers died with 209,000 casualties and roughly 17,000 deaths in the air. 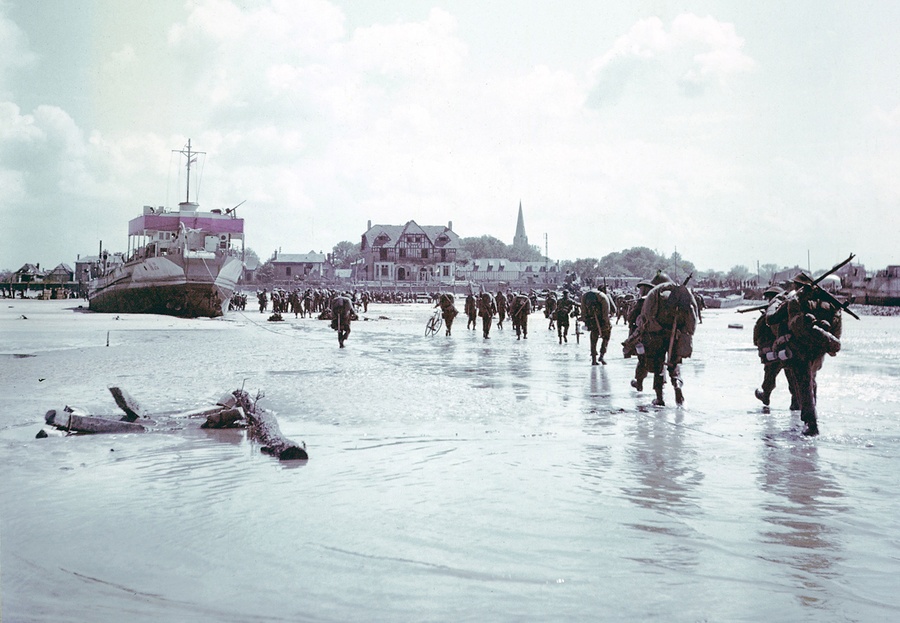 The German side of the invasion is also covered in detail as Milton introduces the reader to German soldiers like Franz Gockel and Josef Shroder whose weapons would meet the allied invaders.  They could not believe the bloodshed they were causing as they were picking off allied soldiers as they hit the beaches.  The arrogant and exceptional Panzer Commander Colonel Hermann von Oppeln-Bronikowski is introduced as he tries to drive a wedge with his tanks as he saw an opening between British troops on Sword Beach and Canadians on Juno. Rommel’s headquarters is also explored in addition to his surprise when the invasion took place – he was visiting his wife in Germany.  The disagreements between Nazi higherups, Hitler, and commanders on the ground is related and if they would have been in better sync with each other, the task for allied soldiers would have been much more difficult and the resulting casualty figures much higher. 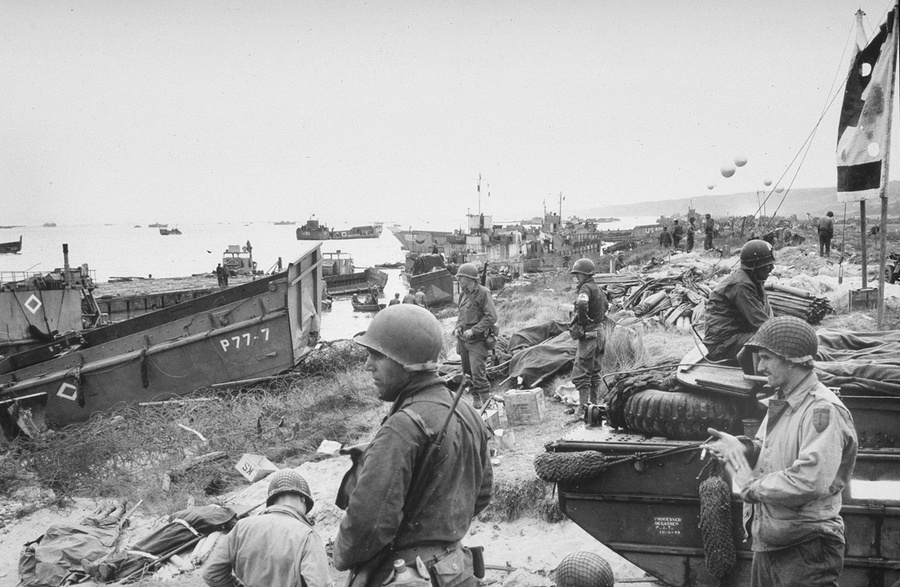 (American troops on Omaha Beach after the landing)

Milton has skillfully woven a very complex narrative that allows the general audience to understand the violence and utter devastation that occurred on June 6th.  He has written a remarkable account through the eyes of the participants providing the reader with insights and an experience that is not always conveyed as well by historians.  After reading Milton’s account one but one cannot escape the fact of the willingness of so many on both sides to fight to the death. In the end despite the the difficulties involved, the importance of the allied success resulted in ultimate victory against the Nazi war machine. 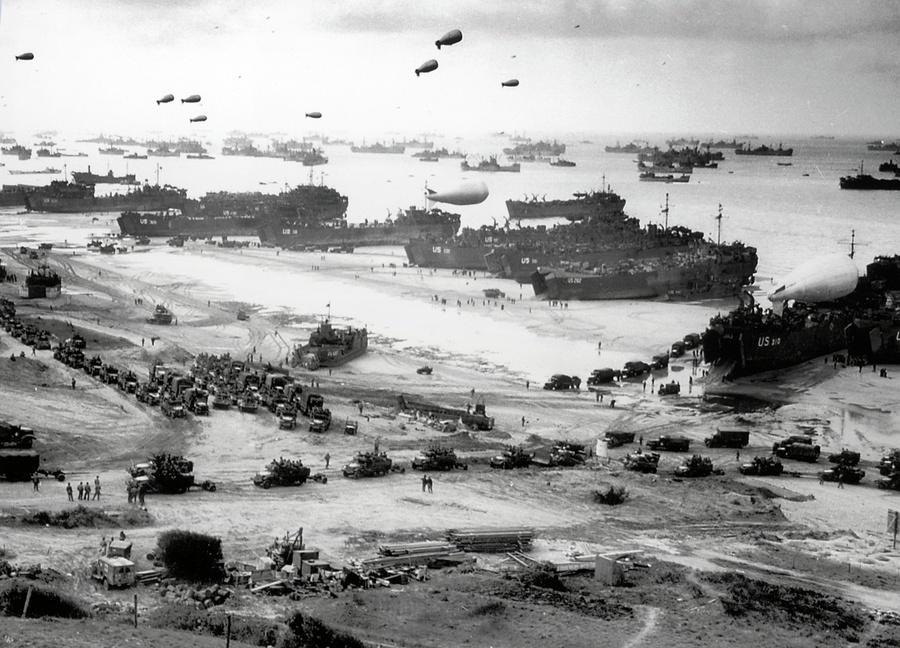