Sandhamn Island was a picturesque spot across the water from Stockholm.  It possessed an interesting maritime history and how it evolved into a tourist spot mostly for the affluent.  It was a calm location where people left their doors unlocked and people went about their lives in a considerate relation to their neighbors.  During the spring and summer, it served as a retreat for visitors from city and for the most part nothing out of the ordinary occurred except for seasonal boating regattas.  The islands off Stockholm serves as the backdrop for Viveca Sten’s Sandhamn murder series.  The first STILL WATERS translated by Marlaine DeLargey is the first installment of eight other volumes is a cleverly conceived murder mystery.

The plot builds upon several characters led by Inspector Thomas Andreasson, a fourteen-year veteran of the Nacka municipality violent crime unit.  Andreasson’s private life is a sad one in that one night he and his wife found their three-month-old daughter dead in her crib.  The trauma and emotional strain would lead to a divorce and a very lonely life for the former married couple.  Next, is Nora Linde, a lawyer, and a childhood friend of Andreasson whose husband is a doctor in Stockholm and refuses to consider any change to their living situation when she is offered a promotion creating a great deal of tension.  Lastly is Margit Grankvist a close colleague of Anreasson and a very sharp individual who possesses a very analytical mind.

Sten’s writing is clear and engaging and it seems that each time the story begins to make sense she adds another twist, and the police have no idea concerning the murders that have taken place on the island and have no clue who might be the next victim.  No one on the island would be leaving their doors unlocked in the foreseeable future.  The beautiful island experiences two deaths that seem related.  The first is Krister Berggren, a very lonely man, who is discovered in a fishnet and rope around his waist.  He had been in contact with his cousin Kicki Berggren who also turns up dead.  Is it a coincidence or is it something nefarious going on?  Soon a third body turns up found by Nora Linde and it seems that the victim, Johnny Almhut had been with Kicki the last night of her life.

The police have a hard time making the connection among the three victims as Anreasson uses a methodical approach to the investigation.  Step by step building upon information that he and his team come across they get closer and closer to solving the murders, then it appears out of the blue, Stern shifts the story line in another direction.  She introduces the possibility that a smuggling operation from Systemet, a wine manufacturing company that had been in the Strindberg family business dating to the 19th century.

When Anreasson has difficulties making progress he turns to his childhood friend Nora Linde. Together, they attempt to unravel the riddles left behind by two mysterious outsiders—while trying to make sense of the difficult twists their own lives have taken since the shared summer days of their youth.  The plot will not keep you on the edge of your seat until the last chapter or two, but as it progresses Stern has the knack to draw you in without the blood and gore of other murder mysteries.

Sten’s novels have been made into an extraordinarily successful television series that is available on Netflix which I highly recommend.  After reading STILL WATERS I look forward to the next in the series CLOSED CIRCLES which continues the professional relationship of Anreasson and Linde in a manner that is not the typical Swedish “noir,” but more of a settled and less violent approach. 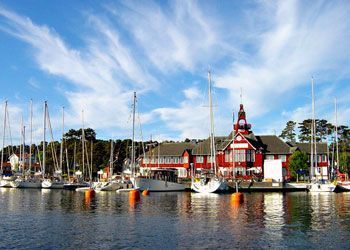