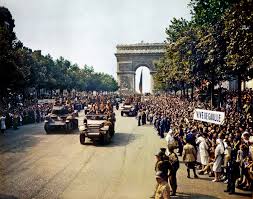 (Paris is liberated after WWII !)

Edward Rutherfurd’s latest historical novel, PARIS begins in 1875 following France’s crushing defeat in the Franco-Prussian War of 1870-71, a war that the French writer, Emile Zola described as “the  debacle” in his novel of the same name.  Rutherfurd goes on to describe the failure of the Paris Commune, a sort of socialist-anarchist movement to replace the French government that succumbed to Prussia in 1871.  The theme of revolutionary movements from 1789 to 1968 is one that is an undercurrent that appears and reappears as Rutherfurd’s plot unfolds.  Rutherurd’s technique is one that has been successfully used in all of his Michneresque type books.  Whether it is SARUM, THE PRINCES OF IRELAND, or NEW YORK, the reader is exposed to a multi-generational milieu that is tied together by historical events that are integrated in and around all of the major characters.  In his current book, PARIS, Rutherfurd again uses his unique ability to capture the reader’s interest as he presents a historic panorama, this time through a history of France, centering on Paris.  Having read a number of Rutherfurd’s previous novels I looked forward to his latest effort and the result is a wonderful read, except for the author’s periodic ploy of creating too many romantic interests and concerns about marriage.

The plot line in part centers around two families, the Le Sourd, a family that supports leftist revolutionaries, and the de Cygne, representative of the conservative aristocratic French social structure.  The novel covers a formidable time period ranging back and forth from 1261 to 1968.  Along the way the reader is exposed to the major events in French history.  Though not entirely chronological in presentation Rutherfurd’s characters are present during the Hundred Years War (1337-1453), the St. Bartholomew Day’s Massacre (1572), the reign of Louis XIV (1661-1715), the French Revolution (1789-1795), the Napoleonic Wars (1801-1815), World War I (1914-1918) and World War II (1939-1945), and culminates in an epilogue that takes place as Parisian students occupy the Sorbonne in opposition to the Vietnam War and other events in 1968. Rutherfurd is a master in creating characters who seem to fit into the flow of history, be it as participants in the French religious civil war at the end of the 16th century resulting in the conversion of Henry IV to Catholicism to unite the French throne, observations concerning the Dreyfus Affair of the late 19th century, the Popular Front under Leon Blum in the mid-1930s, or as members of the French resistance during World War II.  It is obvious that Rutherfurd’s command of Parisian and French history is impeccable.  I would have appreciated some sort of bibliography at the conclusion of the book, but the author states in his acknowledgements that he “never thought it appropriate as a simple storyteller to supply a detailed bibliography for each novel.” (808)

Rutherfurd’s multi-generational approach fits together like a puzzle.  Though the constant switching from one era to the next can be confusing, the extensive family tree provided in the front of the book and maps are useful tools.  As the novel progresses the reader meets numerous artistic and literary figures.  As the novel unwinds a Josephine Bonaparte or Baker appear, as do the likes of Marc Chagall, Ernest Hemingway, Claude Monet, Marcel Proust, and Pablo Picasso.  In the political realm we meet Cardinals Richelieu and Mazarin, Robespierre and Danton, Napoleon I and Napoleon III, Alfred Dreyfus and Emile Zola, and on and on.  The reader can listen in to private conversations amongst these figures and the characters that the author develops as he draws the reader further and further into his grasp.  There are a number of stories that are new even to a seasoned historian, i.e.; how one of the book’s characters participated in immobilizing the elevator to the Eiffel tower so Hitler could not use it to lord over of Paris in 1940.  The detail describing the building of the Eiffel Tower is also fascinating and one of the highlights of the book.  As alluded to before the only drawback to the narrative is the author’s division between the love interests of his characters and the important events that are unfolding during each period.  The repeated romantic interludes that appear in the first two thirds of the book and the author’s obsession with marriage and mistresses detracts from the overall fictional recreation, and are not woven into the storyline as flawlessly as in Rutherfurd’s previous works. Despite this concern I commend Rutherfurd’s talent in creating so many interesting characters and weaving them throughout French history and maintaining the reader’s interest as the fictional journey unfolds.  If you are about to travel to France, or Paris in the near future, Rutherfurd’s new book would be a marvelous tool.