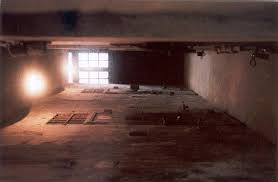 (a cell in the Hanoi Hilton, Hoa Lo Prison)

For those individuals who were in awe of Laura Hillenbrand’s description of the imprisonment of Louis Zamperini in her book UNBROKEN, the emotions that you experienced will be repeated many times over should you choose to read Alvin Townley’s new book DEFIANT: THE POWS WHO ENDURED VIETNAM’S MOST INFAMOUS PRISON, THE WOMEN WHO FOUGHT FOR THEM AND THE ONE WHO NEVER RETURNED.   Townley recreates the experiences of America’s POWs from the Vietnam War.  Instead of presenting a general account that encompasses all POWs, Townley focuses on eleven men, who became known as the “Alcatraz eleven,” ten of whom returned from their ordeal and one who did not.  The author takes you inside the North Vietnamese prison system during the war as we follow each individual from their training, their war experiences, culminating in their being shot down over North Vietnam and their capture and imprisonment.  The men were imprisoned and tortured by their captors and the story Townley relates is one of the human spirit overcoming the most unimaginable events that one might create in one’s imagination.  Jerry Coffee, one of the POWs summarized their feelings in conversation with James Stockdale, the ranking leader of the “Alcatraz eleven” by quoting from the poem “Invictus:”

It matters not how strait the gate,

How charged with punishments the scroll

I am the master of my fate:

From the outset of the book Townley addresses the controversies that surround America’s involvement in Vietnam.  Through the eyes of Commander James Stockdale we experience the chaos of August 4, 1964 and the reported North Vietnamese attacks on the USS Turner Joy and USS Maddox.  Stockdale witnessed events in the cockpit of his F-8 Crusader and saw little evidence of the attack on the USS Maddox.  These events were manipulated by President Lyndon Johnson to force through Congress the Gulf of Tonkin Resolution (passed the Senate 98-2) and put the United States on a course that would result in the quagmire of Vietnam.  Townley does an excellent job integrating the political and military events that took place throughout the incarceration of the POWs.  The author provides analysis and cause and effect decisions that affected the men.  The Johnson administration’s policy of having the families of the downed fliers “keep quiet” did not allay the daily anxiety faced by the spouses and ended in the formation of the League of Wives of American Vietnam Prisoners of War in 1967 under the leadership of Sybil Stockdale and Louise Mulligan.  The role of the wives is integral to the story that is recounted as these woman refused to accept government stonewalling.  Finally, at the end of the Johnson administration they took it upon themselves to educate and bring to the attention of the American people the plight of their husbands.  With the election of Richard Nixon they found an administration that was more open to their requests. Though manipulated at times for domestic and diplomatic reasons, the actions of the US government changed and it carried over to the prisons in and around Hanoi and engendered a change in the torture policy pursued by Camp authorities employed against their husbands.

The book provides moving description of the torture that the POWs experienced.  The North Vietnamese government’s “Enemy Proselytizing Department’s” goal was to gain information from the POWs that could be used as propaganda against the United States.  When individual POWs were brought individually for interrogation they tried to follow the four rules of conduct that the prisoners developed under the leadership of Stockdale.  When they refused to speak, using the Geneva Convention as a shield they were told by their captors that “you are not a prisoner of war…Your government has not declared war upon the Vietnamese people.  You must answer my questions.  You are protected by no international law.” (55) Their rationale was that the POWs were criminals and that justified the application of torture.  Townley goes into intimate detail describing the torture techniques and their affect on the men.  All eleven were broken mentally and physically at one time or another and gave in to their captors demands.  This provoked tremendous guilt on the part of the POWs as they felt they had let their country and comrades down.  Part of the reason they were able to survive the demeaning conditions and mental and physical cruelty they suffered was the bond that was fostered under the leadership senior officers.   These officers helped develop a communication system within the prison through the use of a code employed during the Korean War.  One of the captives, Captain Carlyle “Smitty” Harris had overheard the use of a five by five alphabetic grid during an Air Force Survival, Evasion, Resistance, and Escape School he attended before he was deployed, and helped educate the others in its use.  The communication network relied on tapping and other ingenious methods to keep as many prisoners in the loop as possible.  The North Vietnamese officials tried repeatedly to end all communication by torturing the men but were never able to shut it down.  The ability to communicate provided the men companionship and sanity throughout their ordeal and reflects the amazing resourcefulness they developed in captivity.

Townley discusses all eleven POWs but focuses the most on senior officers, Commanders James Stockdale and Jeremiah Denton.  By 1966 the North Vietnamese camp authorities told them “to choose the path of cooperation and lenient treatment or the path of resistance and punishment; they sought to separate the potentially cooperative from the stubbornly intransigent.” (113)  all eleven men chose the path of “resistance and punishment” and paid dearly for their decisions.  In a sense as the POWs pursued their intransigent attitude they became role models for each other and they looked at each other as positive examples which allowed them to cope with all attempts to break them physically and mentally.

In October, 1967 the men left the “Hanoi Hilton” and were transferred to a former French citadel one mile away.  The conditions were brutal, the torture increased, and many were subjected to further isolation; this prison was nicknames, Alcatraz.  The rhythm of captivity was ongoing, for example, a POW would be asked to write an apology or condemnation of American policy.  The POW would refuse and then he would be subjected to the most gruesome torture techniques.  Finally, the POW would succumb to write whatever he was ordered to.  This would continue in Alcatraz over and over for all eleven captives.  The only let up took place was when Ho Chi Minh died on September 2, 1969 and was replaced by Le Duan in the North Vietnamese hierarchy.  In addition to Ho’s death, Sybil Stockdale and Louise Mulligan’s organizational pressure on the Nixon administration led to a press conference were the US government finally went public with the information they had on prisoner treatment.  As a result in December, 1970, for the first time, Hanoi released the names of 368 POWs. (301)  Though torture was rare in the final years of captivity, the affects of imprisonment remained.

As the negotiations in Paris finally bared fruit the men were released and returned to their families in February, 1973.  The question that dominated my thinking as I read Townley’s account was how these men survived their experience, some as many as eight years in captivity.  According to James Stockdale it was not his training, “rather [it was] his mind, the faith shared among prisoners, and the love of family, who now awaited his imminent return had kept him alive during the horrid term of imprisonment.” (348)   Upon their release Townley artfully brings the reader to the tarmac as the POWs arrive home to meet their spouses and children, some of whom they did not know since they were babies when they left.  As you read the authors description of the reunions it is very difficult to maintain dry eyes.  This is a book that should be read by all as not to forget the 58,000 deaths and over 300,000 wounded that the Vietnam War caused, as well as the trials that our current military families have suffered in the two wars that the United States has fought since 2001.