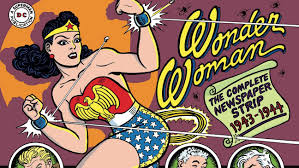 When I was teaching I used to show excerpts of The Wizard of Oz to my students.  My goal was to provoke discussion to ascertain whether its author, L. Frank Baum purposely created the story as a parable for monetary reform in the 1890s expressing some of the ideas of three time presidential candidate, William Jennings Bryan.  The question often arose as to whether the film actually represented a historical analysis or observation of the then contemporary events. After thinking about this concept for many years I am still not certain.  In reading Jill Lepore’s newest book, The Secret History of Wonder Woman I have some of the same uncertainties, but as Baum had done, Lepore proposes many ideas that should provoke animated discussion.  Lepore’s thesis revolves around the life of William Moulton Marston, the creator of Wonder Woman, the character he developed, and the ideas that he put forth.  According to Lepore this comic strip character is central to the development of feminism.  “She is the missing link in a chain of events that begins with woman suffrage campaigns in the 1910s and ends with the troubled place of feminism fully a century later.  Feminism made Wonder Woman.   And then Wonder Woman remade feminism, which hasn’t been altogether good for feminism.”  Wonder Woman was not an ordinary comic book character, “she was at the center of the histories of science, law, and politics…..Wonder Woman’s debt is to the fictional feminist utopia and to the struggle for woman’s rights.” (xiii)  For Lepore, “Wonder Woman has been fighting for woman’s rights for a very long time, battles fought but never won. [It] is the story of her origins-the stuff of wonders and of lies.” (xiv)  For me it is difficult to accept the argument that a comic strip character was central to the development of feminism and that Wonder Woman is the missing link in understanding the struggle for woman’s rights.   Lepore presents the reader with a unique approach, and having read a number of her previous works I was interested in pursuing her latest effort in which she posits a thesis that is both unique and intellectually challenging, making it seriously worth considering.

The Secret History of Wonder Woman is a well researched monograph that is part biography of William Moulton Marston and a socio-political history of his life time that produces Wonder Woman.  To the author’s credit she weaves Wonder Woman cartoons from the 1940s throughout the monograph relating how a given comic strip fits into the pattern of events in Marston’s life and his unique family structure.  The book also contains a colorful insert of numerous Wonder Woman comic strips side by side with a narrative that explains each, and places them within a historical context.  Characters in the comic strips are paired with actual historical figures and events that they supposedly represent that further Lepore’s argument, but I leave it to the reader to determine if the author achieves her goal.

Throughout the book Wonder Woman is interfaced with the history of feminism, whether it is the work of Margaret Sanger fighting for birth control or Emmeline Pankhurst’s struggle to achieve woman’s suffrage.  The man she credits for creating Wonder Woman, William Moulton Marston is an interesting and eccentric character in his own right who earned a Ph.D in Psychology from Harvard, but during his career he failed to maintain academic posts at American, Tufts, and Columbia universities.  His own research centered on the systolic blood pressure test that became one of the components of the modern polygraph test, though he claims to have invented the lie detector.  He was convinced about the connection between emotion and blood pressure and how men and woman react differently to the same situation.  Marston was also committed to woman’s rights and he lived a somewhat bohemian lifestyle as he was married to Elizabeth Holloway, who shared his research and writings and was certainly his intellectual equal, but he also lived with his former graduate student and researcher, Olive Byrne.  He fathered two children with each, but Bryne’s children were told that their father had died and they all lived together in the same household, so in a sense Marston had two wives.

Lepore also produces a history of the comic book industry dating back to 1933 including the role that Marston and his wife/wives played.  It was at this time that Charles Gaines, the publisher of Superman magazine hired Marston as a consulting psychologist who convinced Gaines that what he needed to counter attacks on comics was a female super hero.  The period of 1920 through the 1960s is often seen as a dormant period in feminist history by some.  For Lepore in the 1940s “there was plenty of feminist agitation in the pages of Wonder Woman.” In a 1944 issue of Wonder Woman a biography of Susan B. Anthony was contained calling her the “liberator of Womankind.”  The issue also contained the story “Battle for Womanhood,” The story and drawings mirrored the suffragist’s use of war as they had in the 1910s.  “In the First World War, suffragists suggested that war was keeping women in a state of slavery.  In the Second World War, Marston suggested that women’s contributions to the war effort were helping emancipate them….there are eight million American women in war activities-by 1944 there will be eighteen million!” reports one of the characters, dragging a ball and chain. (225)  Marston strongly intimates should woman achieve equality or even power over men, war will end.

Marston saw himself as a scholar and that his Harvard background and life’s work lent itself to consider that Wonder Woman and the research behind her creation was a scholarly enterprise.  This belief ran into strong opposition from the academic community, but one should strongly consider that there is a strong element of scholarship in Marston’s work that Lepore describes in detail.  Further, if one can see past Marston’s unusual approach and high powered ego you can see the work of a genius that has not achieved much recognition.   However, his rationale for creating Wonder Woman as he wrote is American Scholar magazine in 1943 is very convincing; “not even girls want to be girls so long as our feminine archetype lacks force, strength, and power.  Not wanting to be girls, they don’t want to be tender, submissive, peace loving as good woman are.  Women’s strong qualities have become despised because of their weakness.  The obvious remedy is to create a feminine character with all the strength of Superman plus all the allure of good and beautiful women.”

Lepore’s narration of the important figures in twentieth century feminist history is important as it places Marston’s story in the proper historical context.  Lepore’s succinct and snappy prose tells the story well as she goes from Marston’s life to his use of Greek mythology to justify the creation of his super hero.  Marston may come across as a “bit different” than most people of his profession, but that difference was probably his genius and that’s what it took to foster the creation a comic book character, whose origin in Greek mythology could explain and work towards fulfilling the goal of achieving women’s equality.  Following Marston’s death from cancer in 1947 Holloway tried to take over the preparation and writing of the comic strip.  She was rejected by the publisher and with subsequent writers Wonder Woman’s popularity declined only to reemerge again in the 1970s.  Lepore follows the feminist movement throughout the 1970s and 1980s as it splintered and seemed to pass into the background.  What makes her monograph important is that she was able to unlock the secret of Wonder Woman’s origins, as she points out that it was a history that was waiting to be written, and whether you accept her findings or not, it is a story that is well told.

If Wonder Woman could return to her 1940s persona she could comment on why certain politicians opposed the Lily Ledbetter Fair Pay Act of 2009, guaranteeing equal pay for women, as it was an issue in the recent midterm elections.  If Marston was alive today, I am certain what words he would have put in her mouth.  Lepore has written an important historical work through the life of William Moulton Marston, his family, and those who worked with and against him.  The question remains should he be considered a major player in the woman’s movement, the question is an open one, but Lepore should be praised for presenting an interesting and challenging monograph that delves deeply into the question.  As Gloria Steinem has written in the initial issue of Ms. Magazine in 1972, “looking back now at these Wonder Woman stories from the 40s, I am amazed by the strength of their feminist message.”