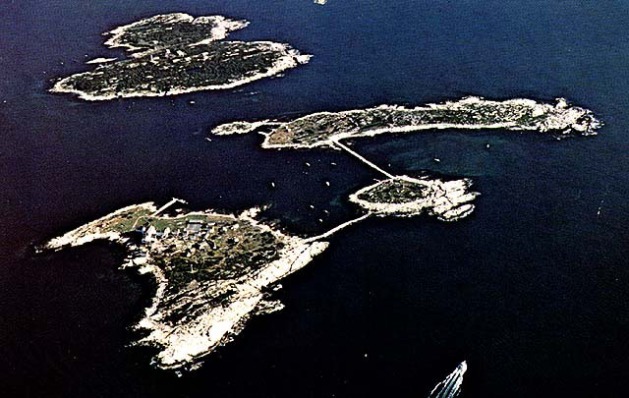 (Aerial picture of the Isles of Shoals about eight miles off the Portsmouth, NH coastline)

A few nights ago I had the pleasure of listening to J. Dennis Robinson speak at a local bookstore near my home in Portsmouth, NH.  I am a recent resident of the area and have been following Mr. Robinson’s “history” column in the Portsmouth Herald since my arrival.  These articles and the book STRAWBERY BANKE: A SEAPORT MUSEUM 400 YEARS IN THE MAKING also written by Mr. Robinson have educated me and sparked my interest in the rich history of the seacoast region.   His new monograph MYSTERY ON THE ISLES OF SHOALS has further broadened my knowledge of the area, as he has produced a first class “whodunit” about a story that everyone with knowledge of this 1873 murder knows the outcome.  Robinson in his recent talk claimed not to be a historian, but a history writer.  As a retired historian myself I believe I have the background to recognize and praise a true historian, which is certainly the case with Robinson.  His literary training has certainly assisted his prose and writing style, but the research techniques and historical knowledge are a wonderful combination that has produced an exceptional monograph that should interest a wide ranging audience apart from the seacoast region. Robinson begins by reviewing the history of the various theories and myths that have emerged years after the murder of two Norwegian immigrant women, Karen and Anne Christiansen by a Prussian immigrant, Louis Wagner.  The author points to the novel and Hollywood film that distort the facts of the case, but a significant part of the public seems to accept as truth.  For Robinson the alternative history of events is incorrect and he takes on the task of setting the historical record straight.  In his examination of events and evidence, Robinson leaves no stone unturned in uncovering the truth.  Since a key part of the story involves the ability of someone to row from the mainland to Smuttynose Island, a considerable distance in 1873, Robinson provides numerous historical examples to prove that the distance traveled by Wagner the evening of the murder was easily accomplished.  In fact, during his talk last week, he introduced a seventy five year old fisherman who had accomplished the task last June.

(Louis Wagner and the murder weapon)

Robinson’s monograph is more than a history of the murder of the two Norwegian women.  It explores the pre-crime activities of the characters involved, the arrest, trial, and execution of the murderer.  It is a history of the seacoast region as far north as Thomaston, Maine and south to the Portsmouth region.  The author takes the reader back 6000 years when Native Americans thrived in the waters that make up the Gulf of Maine.  He describes how glaciers created the nine islands that make up the Isles of Shoals among the 3000 or more islands that are located along the jagged coast of Maine. (13)  Robinson describes the arrival of John Smith in 1614 and the settlement of New Hampshire in 1623.  Robinson’s history obviously concentrates on the history of the then “crime of the century” and the characters involved, but he also takes on the lives of the participants in the story after Wagner’s execution following them until they pass on.

Robinson focuses on immigration, the development of the islands, and the state of fishing in the region as he sets the stage for the reader.  The most important characters are Louis Wagner the perpetrator of the crime and his victims.  But Robinson also spends a great deal of time developing the other main characters that include John and Maren Hontvets, whom Wagner was trying to rob before his victims got in the way, with Maren escaping and emerging as the most important witness at the trial.  The reader is also introduced to the local politicians involved, the prosecution and defense attorneys, key witnesses, prison officials, and many more.  In doing so the reader gets to know all involved and because of Robinson’s captivating prose they almost feel they have become part of the story.  Throughout, Robinson has a fine eye for detail, be it discussing the history of the murder weapon, an ax that in part resides in the Portsmouth Atheneum, an old membership library on Market Square in Portsmouth.  Robinson goes on to provide a history of the ax as tool in American history, as well as showing that the use of one as a murder weapon was not unique.  This is the type of detail that the author repeatedly interjects into the narrative enhancing the reader’s experience.

For the layman who is interested in the plight of the New England fishing industry during the second half of the nineteenth century, Robinson lays out the problems that the industry faced in detail.  He explores how the sources of fish were being depleted and the need to locate new fishing grounds which drove fisherman up and down the coast to locate new sources.  The problem was that those regions grew scarcer and scarcer necessitating the use of larger and larger boats that local fisherman could ill afford.  One of the few who could was John Hontvets, who purchased long trawl lines and built a sturdy schooner in order to survive.  It was the jealousy that Wagner felt towards John Hontvets that probably drove him on the night of March 5, 1873 to steal a dory and row out to the Hontvets’ home on Smuttynose Island expecting to find only three women present to steal what he thought was between $600 and $1000 hidden somewhere on the premises.  Robinson describes in minute detail the murder and succeeding events leading up to Wagner’s capture in Boston.  Robinson zeroes in on the conversations that Wagner had before and after the crime throughout the book.  It reflects an inordinate amount of research and command of the material.  What is interesting is that Wagner repeatedly provided oral snippets of what Robinson describes as “confessional outbursts,” that puts the reader inside Wagner’s thought processes and leads us to believe he subconsciously wanted to be caught and convicted.

Robinson plays special attention to the personalities of the attorneys involved and the strategies they pursued.  The trial is reviewed very carefully and the material that is available from the trial transcript is mined very carefully by Robinson as he integrates a degree of sarcasm and humor as he dissects the myths and alternate histories that emerged after Wagner’s conviction.  Robinson takes the reader into Wagner’s jail cell, his escape and recapture, and after all the legal wrangling dealing with the death penalty and which state, Maine or New Hampshire had jurisdiction over the case, to the execution of Louis Wagner on June 25, 1875.

For those interested in the economic development of the Isles of Shoals at this time great detail is provided.  The building of tourist hotels, the attraction of Boston literary types and the wealthy are delineated carefully, particularly Cecilia Thaxter who grew up and lived on Smutty nose, who gained fame as a poet and writer.  Her article in the Atlantic Magazine, “A Memorable Murder,” “was something risky and powerful when it appeared in 1875,” but she has been “credited as a founder of true crime literature.”  (301)  “Like a great poet, the crime writer must also replicate the tempest that rages inside the mind of the killer tapping into his jealousy, vengeance, ambition, and hatred,” as nineteenth century essayist, Thomas De Quincy has written, something that Thaxter easily accomplished.  According to Robinson, her article could have served as a model for Truman Capote’s In Cold Blood, and Norman Mailer’s The Executioner’s Song.

Robinson concludes the last section of the monograph by following the history of the main characters after Wagner’s execution.  The reader learns of the fate of Celia Thaxter, the legacy of the Hontvets family and Ivan Christiansen whose wife was murdered, as well as the deathbed confession hoax that tried to shift the blame for the crime onto Maren Hontvets.  Not to be excluded are a number of key witnesses as well as the prosecution team of George Yeaton and Attorney General Harris M. Plaisted and Wagner’s intrepid lawyer Judge Rufus Tapley.

As the books comes to a close, Robinson dissects the pseudo-historical novel based on the murders, Anita Shreve’s Weight on the Water and the Hollywood film of the same name based on the book.  Despite the presence of Sean Penn and a $16 million budget, the film was essentially a flop, though it seems to be downloaded more and more today by those interested.  However, for Shreve the novel made her a literary talent as she has a film based on her book added to her many publications.  Lastly, Robinson includes extensive author’s notes that are a treasure trove of information that for those interested, can lead to wonderful new discoveries. Overall, considering that many people who are drawn to this subject matter are already privy to the story and its outcome, Robinson has done a remarkable job of synthesis creating an interesting compilation of information some old, but much that is new.  I recommend it highly for those who are interested in a scintillating murder story, but more so an overall history of the seacoast region in the latter part of the nineteenth century.