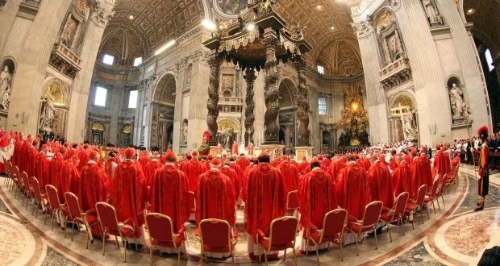 Robert Harris’ new novel, CONCLAVE takes the reader inside the world of the Vatican and its byzantine politics.  Set in Rome, the Pope has died and there is a question of what he said to certain Cardinals upon his passing and what impact it might have on the impending election of a new Pope.  Harris’ moderator is the seventy-five year old Jacobo Lomeli, the Dean of the College of Cardinals, but a person who would like to return to a religious order to live out his life in prayer.  With the death of his holiness, Lomeli finds himself as the overseer of the Conclave to choose the next leader of the Catholic Church.  As is true with any large organization that must choose a new leader, there is a great deal of intrigue and power brokering.  As I read the novel all I could think of was the American Congress and its inability to come to fruition on something substantive. The factions within the College of Cardinals is somewhat traditional.  On one side we have the liberal wing that is coalescing around its intellectual Secretary of State Aldo Bellini; the Confessor-in-Chief Joshua Adeymi, who hopes to be the first black Pope; the Chamberlain of the Holy See, Joseph Tremblay, a Canadian with strong links to the Third World, and the Patriarch of Venice, Goffredo Tedesco, the hope of conservatives who are against the ordination of women and wants to move away from Italian to the use of Latin in all areas.  Lomeli immediately faces two challenges aside from assuaging the egos of these cardinals.  It seems that before the Pope passed away he created a new Cardinal, Vincent Benitez, the Archbishop of Baghdad and he did it “in pectore” (only the Pope knows) and did not inform anyone.  Benitez appears unannounced at the Conclave and is recognized for his work in Africa dealing with victims of terrorists like Boko Haram and the dangers of leading the Catholic Church in Iraq.  The second challenge occurs when he chooses to forgo part of his prepared oration to the Conclave and speaks extemporaneously.  As a result of what he calls for in the church, many Cardinals now see him as a candidate.

The tradition, ritual, and pageantry of the Catholic Church is on full display as Harris develops his novel.  The ceremonies are intricate as Lomeli leads the 118 member College of Cardinals in choosing the next Pope.  But what dominates the plot is the contending factions and the behind the scenes actions taking place.  Harris takes the reader through each ballot with intrigue and deal making paramount.  The first four ballots are dominated by scandals and stress for Lomeli, but then events take place that the Conclave cannot control.  Those who are fans of Robert Harris, be it because of his books FATHERLAND, ARCHANGEL, or his trilogy dealing with the struggle for power in ancient Rome will not be disappointed, particularly with the ending!