(Emmett Till and Carolyn Bryant)

At a time when the “Black Lives Matter” movement continues to gain momentum it is interesting to contemplate what the turning point was for the Civil Rights Movement.  In his new book THE BLOOD OF EMMETT TILL, Timothy B. Tyson argues that the lynching of Emmett Till on August 28, 1955, by two white men in rural Mississippi was the tipping point.  It appears their actions were in part motivated by the 1954 Supreme Court’s Brown v. the Board of Education of Topeka, KA decision outlawing “separate but equal,” a landmark case that lit a fire under white supremacists in the south.  Shortly thereafter, Rosa Parks refused to move to the back of the bus in Birmingham, AL and events began to snowball.  Tyson reexamines the murder of Till and explores what really happened that night.  The author includes new material gained from his 2007 interview of Carolyn Bryant who was supposedly the victim of some sort of offensive behavior that violated Mississippi’s unwritten code that existed between whites and blacks.  It seems that Bryant’s memory of what transpired after fifty years has changed, which makes it even more disconcerting in exploring the plight of Emmett Till.

In her interview Bryant changed her story from the testimony given in the trial of her husband Roy Bryant, and brother-in-law, J.W. “Big” Miam who were accused of murdering Till.  Her testimony “that Till grabbed her around the waist and uttered obscenities” was not true.  Till did not grab her, but the all-white jury acquitted both men of the murder.  Till a fourteen year old boy and his cousin, Wheeler Parker who lived in Chicago’s south side were visiting their uncle Reverend Moses Wright who was a sharecropper on the G.C. Plantation in the Mississippi Delta.  Both boys were not ignorant of the mores of white-black relations in Mississippi, but what is key to the story is what actually happened when Till entered the Milam country store and interacted with Mrs. Bryant.  That night Till was seized from Wright’s house by Roy Bryant and J.W. Milam and was severely beaten, shot in the head, and dumped in a river twelve miles from the murder scene.  Tyson provides detailed accounts of August 28, 1955, the return of Till’s body to Chicago, the arrest and trial of the two men, the effect on American society, the burgeoning Civil Rights Movement, and the world wide reaction to the verdict which played into the hands of the Soviet Union in the heart of the Cold War.

For Tyson, the key to the reaction to Till’s murder was the behavior and strategy pursued by his mother, Mamie Bradley.  Once she learned of her son’s kidnapping she decided that “she would not go quietly” and began calling Chicago newspapers as she realized there were no officials in Mississippi she could appeal to.  Sheriff Clarence Strider of Tallahatchie County was put in charge of the investigation despite the fact the murder occurred outside his jurisdiction.  For Strider and other county officials the goal was to bury Till as soon as possible and let the situation blow over.  Bradley refused to cooperate and demanded that her son be returned to Chicago for burial.  Once that occurred Bradley’s only weapon to make sure her son’s death had meaning was his body.  During the viewing and funeral she made sure that the casket was open so the public could learn the truth of how her son was tortured and then murdered, and learn what Mississippi “justice” was all about.  Because of the new medium of television and newspaper photographs of the mutilated body the entire country was now a witness to the results of the lynching.

Tyson does an excellent job bringing the reader inside the courtroom and explaining why the two murderers were acquitted.  He digs deep into Mississippi’s historical intolerance of African-Americans and how they should behave and be employed.  Tyson reviews the plight of Black America through World War II and touches on the hope that returning black veterans who fought for democracy would be treated differently after the war.  This did not occur nationwide, particularly in Mississippi.  However, as the Civil Rights Movement shifted its strategy toward enforcing its voting rights and employing the economic weapon, Mississippians grew scared and became even more violent towards African-Americans, and with the Brown decision men like Bryant and Milam were exorcised to the point of lynching Till. 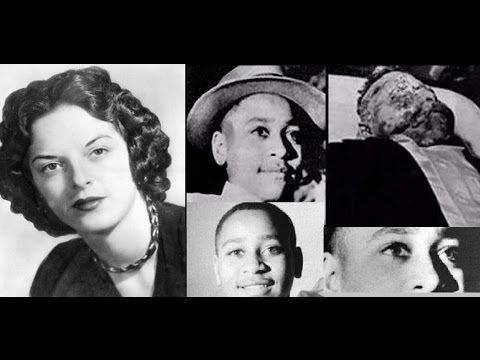 (The mutilation of Emmett Till)

Tyson presents a concise history of intimidation, violence, and murder that African-Americans confronted each day in Mississippi.  As the NAACP grew and demands for voting rights and desegregation expanded the powers that be in Mississippi grew worried.  They relied on people like Thomas Brady, a Mississippi Circuit Court Judge and occupant of a seat on the state’s Supreme Court to create the “Citizens Council Movement” to espouse the propaganda of race mixing and the threat to southern womanhood as the gospel of the white south.  In fact, the defense in the Till trial leaned on the threat of southern womanhood in its argument that gained the acquittal.  The fact that the trial itself took place only twenty days after the murder in of itself reflects the lack of proper investigation. Further, the threats and coercion to prevent witnesses from testifying is testimony to the lack of justice.  In fact, a few who did testify for the prosecution, uprooted their lives in Mississippi and moved to Chicago for fear of retribution.

(Carolyn Bryant, then and now)

The person in this drama who should feel ashamed of themselves is Carolyn Bryant whose lies contributed to the acquittal of Till’s murderers.  It is a shame that there is a statute of limitations for perjury because she was certainly guilty.  Her show of “conscience,” for this reader is fifty years too late.

Reading this book can only make one angry about America’s past and one would hope that race would no longer be a factor in our society.  But in fact it is.  We witnessed race baiting throughout the last presidential campaign and as a society we have not come to terms with the idea of “equal justice under the law.”  Tyson’s book should be read in the context of history, but also as a vehicle to contemporary understanding.  As Tyson aptly points out, the death of Emmett Till “was caused by the nature and history of America itself and by a social system that has changed over the decades, but not as much as we pretend.” (208)  One wonders if the shooting of Michael Brown in Ferguson, MO will be as transformative an episode as the death of Emmett Till.

(Emmett Till and Carolyn Bryant)