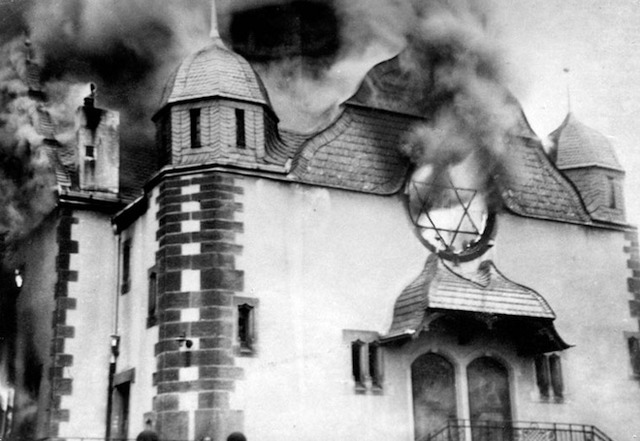 (The burning of a Jewish synagogue during Kristallnacht)

During World War II there was a little known group of men who were trained at Camp Ritchie, Maryland.  Their extensive classwork and field training was designed to prepare them to interrogate German prisoners of war and gather intelligence to be used against Nazi forces.  What became known as the “Ritchie Boys” was formed in mid-1942 and was made up of 1985 German born Jews who had immigrated to the United States in response to Nazi persecution particularly after Hitler’s rise to power in 1933,  Kristallnacht in November, 1938, and the events of 1941.  Most of these German-Jewish boys arrived without parents and siblings and had to adapt to their new homeland on their own.  Part of the reason was due to the racist/anti-sematic attitude on the part of a number of important State Department officials like Breckenridge Long who as Assistant Secretary of State helped set American immigration policy.  The journey of the Ritchie Boys and their impact on the Second World War is aptly told by Bruce Henderson with compassion and insight in his latest book, SONS AND SOLDIERS: THE UNTOLD STORY OF THE JEWS WHO ESCAPED THE NAZIS AND RETURNED WITH THE ARMY TO FIGHT HITLER.  The story of the Ritchie Boys takes them through their wartime experiences in gathering important intelligence from German POWs, their participation in a number of important battles, including the Normandy invasion, Operation Market Basket, the Battle of the Bulge, liberation of extermination camps, and their efforts after the war to locate family members.

In the first part of the book Henderson focuses on the early plight and immigration of a number of men who would become Ritchie Boys.  They include Martin Selling, who was rounded up after Kristallnacht, separated from his family, imprisoned in Dachau and after his release made it to the United Kingdom due to the work of a Jewish relief agency that eventually provided a visa to enter the United States.  Gunter Stern, who would change his name to Guy grew up in a middle class family in Northern Germany and as the situation for Jews deteriorated in 1937 he was sent by himself to the United States to live with an uncle in St. Louis because the State Department refused to allow the rest of his family to immigrate.  Stephan Lewy was placed in an orphanage after his mother died and the economic fortunes of his father collapsed.  After his father was released from a concentration camp and they experienced Kristallnacht he left Germany for Paris leaving his father and step mother behind.  Werner Angress was not a very good student and he was sent to an agricultural farm in Poland where he found success.  Once things deteriorated in Berlin his father developed a successful plan for the entire family to escape and go to Amsterdam.  In 1939 Angress escaped from Holland and left for America.  Lastly, Victor Brombert, another teenage boy was smuggled out of Germany in 1933 and moved to Paris, however, during the Vichy regime he left France to experience a harrowing voyage to New York and safety in 1941.

All of the boys experienced the emergence of Hitler, their removal from schools, harassment by Hitler Youth, and the collapse of their families as parents were arrested, businesses confiscated, and the eventual separation.  All witnessed and were affected by the 1935 Nuremberg “Blood” Laws, Kristallnacht, and the difficulty of emigrating in part because the Nazis seized their assets and only allowed them to take a pittance of their wealth out of the country.  Henderson further explores the difficulties as they had to navigate the exclusionary immigration laws of the United States and their enforcement by elements in the State Department.  Jews were required to provide affidavits from American citizens that they would take care of their relatives financially, along with other documentation that took a great deal of time to obtain.  The work of David Wyman provides an inside look into the “old boys club” of the State Department and their arcane views when it came to race and Jews.  Henderson describes the heroic efforts of the families as they realized that only one family member would be allowed to leave and in most cases it was the eldest son with the hope they could reunite later. (American soldier and survivors of the Wobbelin concentration camp)

The boys that are the center of the story would become naturalized American citizens before they were sent overseas to fight the Nazis.  Henderson describes their training and dispatch to England to participate in the Normandy landing.  Since native Germans would have knowledge of Nazi/German culture and colloquial language the Ritchie Boys were in high demand to interrogate POWs.  The individual stories Henderson presents reflects the importance of the Ritchie Boys to the allied war effort.  Particularly interesting is Werner Angress who was attached to the 82nd Airborne and with little training parachuted behind German lines.  His later intelligence gathering leading up to and during the Battle of the Bulge was very important.  Another insightful segment deals with Victor Brombert’s participation in the 28th Infantry Division as he experienced combat in Belgium and Northern France and predicted the Battle of the Bulge which was ignored by hire ups.  Perhaps one of the most ingenious of the Ritchie Boys was Guy Stern who after Normandy was made Head of Survey and his reports were distributed to all allied commanders including General Eisenhower.  Along with another Ritchie Boy named Manfred Ehrlich, who changed his name to Fred Howard, he developed a number of unusual schemes in order to extract information from POWs.

(Werner Angress, his mother and two brothers after the war)

Henderson tells a number of wonderful stories including the visit of Marlene Dietrich as part of the USO, the capture of Hauptmann Kurt Bruns who ordered the death of two captured Ritchie Boys, how the Ritchie Boys had to overcome the skepticism of some officers who accused them of being German spies, and at times the guilt they felt when they had to use unorthodox methods to extract information from POWs.  Perhaps the most poignant part of the book is when the Ritchie Boys confronted the Holocaust when they witnessed the concentration camps.  Stephan Lewy arrived at Buchenwald with the Sixth Armored Division, Guy Stern arrived at Buchenwald three days after its liberation, Werner Angress witnessed the Wobbelin concentration camp, and when Manny Steinfeld arrived there he could not escape the possibility that his sister and mother were murdered there.

Overall, Henderson tells a remarkable story.  It is told clearly integrating numerous interviews with the Ritchie Boys and accompanying research.  My main criticism involves the method of sourcing which is very ineffective and difficult to attribute information.  As a historian I would love to have been able to match materials to citations so I might have pursued certain aspects of the book further.  However, the topic is fascinating and Henderson has done these men a great service by telling their story.

(The burning of a Jewish synagogue during Kristallnacht)