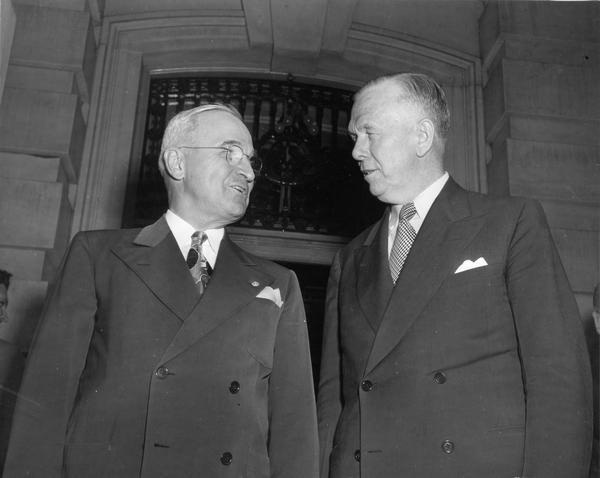 At a time when the President of the United States disparages the European Union and NATO, it is important to remember the role the Atlantic Alliance has played since the end of World War II.  President Trump can tweet and criticize these institutions all he wants, but you skirt their importance particularly in light of the policies pursued by Vladimir Putin and his nationalistic “Russia first” policies.  Perhaps the most important policy of the United States in the post-war world, which formed the bedrock of its foreign policy toward Europe, was the Marshall Plan.  The plan was conceived by the State Department under then Secretary of State, George C. Marshall as a vehicle to promote European recovery from World War II and foster unity against the Soviet Union, as by 1946 the wartime alliance was severed.  To understand how the Marshall Plan came about and its impact, an important lesson for all to learn, one should consult Benn Steil’s new book, THE MARSHALL PLAN: DAWN OF THE COLD WAR.

The book itself does more than present the ideological give and take within the American foreign policy establishment faced with the destruction in Europe after the war as it details negotiations with European counterparts, and presents Soviet opposition to the Marshall Plan in general, especially for Eastern European countries like Poland and Czechoslovakia.  Steil’s account is the most detailed and lengthy to date as it dives deep into the postwar “German problem,” Soviet actions in Eastern Europe, and finally the Berlin Blockade, culminating with the creation of NATO.  Steil presents the benefits of “soft power” as a foreign policy tool, something the current occupant of the White House should consider.

As Harry S. Truman assumed the presidency a new dynamic was at work in American foreign policy.  Franklin Roosevelt mostly acted as his own Secretary of State, but Truman’s approach would be different as the State Department regained influence with the presence of George C. Marshall, George F. Kennan, Dean Acheson, William Clayton, and others.  As the war came to a close Stalin had tremendous expectations for the Soviet Union.  He witnessed a United Kingdom in decline as it would stop providing aid to Greece and Turkey by 1947.  It would also see its position erode within the Commonwealth especially in India and Palestine.  As the US quickly demobilized and Germany defeated, Stalin felt there would be little opposition in spreading the “Soviet blanket” over Eastern Europe and create the “buffer zone” he had spoken about so often during the war.

By 1946 it became clear that the wartime alliance was over with disagreements at the Council of Foreign Ministers meetings in dealing with Germany, reparations and other issues.  This produced George Kennan’s famous “Long Telegram,” which stressed Russia’s expansionist nature, and within a few weeks Winston Churchill made his famous “Iron Curtain speech in Fulton, Missouri.  Steil stresses that Stalin was bent on pushing the United States to see how much he could get away with.  The Soviets would push and prod over issues and territories whereby US policymakers came to see western unity and recovery as the only viable alternative to a major military commitment in Europe.

Steil offers a dramatic description of Europe’s plight in the winter of 1947.  The destruction of homes and infrastructure, compounded by freezing temperatures led to starvation, frostbite, and death.  This situation provided the major impetus for American aid to Europe as communist parties in Italy and France seemed to be a threat, in addition to the civil war in Greece and troubles in Turkey.  Exacerbating the situation was the massive movement of ethnic minorities across borders, particularly as it related to Germany and Poland.  What became clear by 1947 that some sort of economic stabilization of Europe was the key to peace.

Steil correctly points to the evolution of Dean Acheson’s thinking toward Russia as a key to developing the Marshall Plan as his wartime sympathy toward Moscow changed when confronted by Soviet demands in the Mediterranean.  Acheson would become Marshall’s Chief of Staff and an Undersecretary of State, and along with George Kennan would outline his “containment” policy in his famous “X Article” in Foreign Affairs, and the announcement of the Truman Doctrine and aid to Greece and Turkey – the American approach to Soviet machinations had changed. 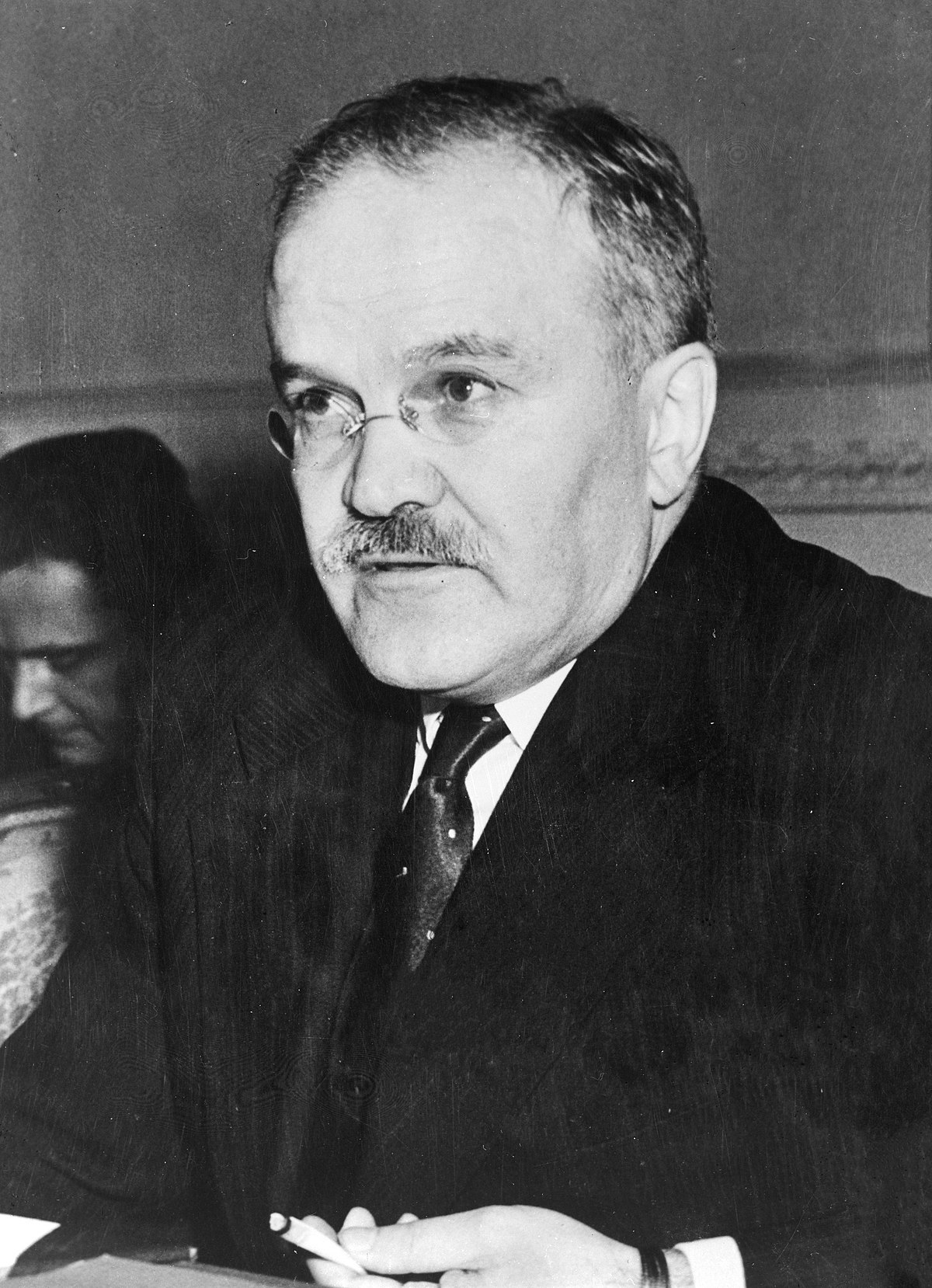 The key for European recovery was that the German economy had to be strong.  The old concept of “Mitteleuropa” remained a reality and US policymakers did their best to keep reparations manageable and allow German industry to rebuild, much to Stalin’s chagrin.  Steil zeroes in on the Moscow Conference of 1946 as the beginning of the Cold War as Marshall left the meetings believing that Stalin’s goal was to leave Europe in shambles, allowing him to pick up the pieces.  Marshall would later say that the impetus for the European Recovery Program, a.k.a. Marshall Plan was a direct result of Stalin’s attitude.

Steil’s analysis mirrors some of the arguments put forth by Michael Hogan in his book, THE MARSHALL PLAN in that the recovery program was not totally one of American largess and altruism, with no agenda of its own.  If Europe did not recover, then it could not buy American products leading to a downturn in the US economy.  Further, the resulting political, social, and economic dislocation would foster a piecemeal US aid approach which would drain US resources.  Hogan, more so than Steil concluded the US would allow France to recover some of its empire i.e., Southeast Asia as a means of gaining support for the Marshall Plan as well the integration of all three German zones.  European colonies were important to their recovery so the US receded from its anti-imperialist tone fostered by Roosevelt during the war.

Steil explores two other key figures in depth without which the Marshall Plan may not have been developed and passed by Congress.  First, the work of Will Clayton who had run the Reconstruction Finance Corporation under the New Deal, and Michigan Senator Arthur Vandenberg.  Clayton was responsible for conveying the sense of urgency that the American public needed to hear and worked to foster a US plan to restore an equilibrium to the continent.  His greatest contribution was convincing people that the problems that existed in European countries were interrelated, and could only be solved through cooperation and a certain amount of integration.  Clayton was able to work through European and British opposition to American plans and in the end, along with his colleagues was successful.  Vandenberg stands out as the Republican Chairman of the Senate Foreign Relations Committee who evolved from an isolationist to a grudging internationalist as he was greatly affected by wartime events and the condition of Europe after 1945.  He was able to gain passage of the European Recovery Act in his committee, bringing along fellow Republicans and gaining overall Senate approval.

Perhaps one of Steil’s best chapters analyzes the Soviet approach to Marshall’s Harvard Speech where he announced the recovery plan and their strategy to confront American aid.  Steil presents Stalin’s and Molotov’s thinking regarding whether to oppose Marshall’s offer, particularly as it related to Eastern European “satellites.”  Soviet ideology is at the forefront of the author’s approach and he provides a bird’s eye view into Kremlin thought processes.  In the end by refusing American aid, Stalin did the United States a favor because there was no way Congress would approve aid to the Soviet Union, and Communist demands would have been such that the US could not have afforded it.

Some have argued that when Molotov rejected American aid and cabled Eastern European allies not to discuss aid with the west on July 7, 1947 it marked the onset of the Cold War.  Further, by December, 1947 Soviet disinformation over Berlin and the collapse of the London Council of Foreign Ministers meeting, the CIA warned of the possibility that the Soviet Union might try to forcibly remove American troops from Berlin.  With the Russian clamp down on Czechoslovakia in early February, 1948 and the questionable death of its Foreign Minister Thomas Masaryk, Stalin had now seized a country that was not agreed to by the “Big Three” during the war.  Lastly, on March 5, 1948 England, France and the United States merged the three allied zones to create West Germany – the Cold War was on, making the success of the Marshall Plan an urgent necessity.

The major strength of Steil’s monograph is his ability to explain the bureaucracy that the Marshall Plan produced as it dispersed more than $13 billion in aid from 1948 to 1952.  He writes in an easily understandable style that allows the economics “layperson” the ability to understand complex mechanisms that were used to fuel the recovery of Western Europe.  Steil provides an in depth analysis as to whether the Marshall Plan actually was successful or not, and integrates the role the creation NATO had on this argument.  Though a military component was not in early American planning, the NATO alliance was finally seen as a security imperative and went hand in glove with the economic recovery of Europe.

Steil goes on to discuss the role of NATO today in light of its expansion eastward after 1991.  The Russians were under the assumption that the alliance would not encroach on its western borders.  As the alliance accepted former Soviet satellites into membership Russian leadership grew increasingly agitated exemplified by Vladimir Putin’s actions in Georgia, Crimea, and the Ukraine.  Many like to compare the current situation to the post World War II world, but there is a major difference; during the Truman administration there seemed to be a coherent strategy based on realism, accepting the Soviet sphere of influence.  Today, it appears there is no coherent strategy and a total lack of statesmanship – perhaps we need to relearn the lessons of the early Cold War period.

In summary, Steil has done a remarkable service for historians and those who want to understand Europe’s recovery following World War II.  Though at times, the author can become bogged down in statistics, his overall command of history, primary and secondary sources, and his ability to synthesize the ideas of the main individuals and economic theory lend itself to an important contribution to Cold War literature. 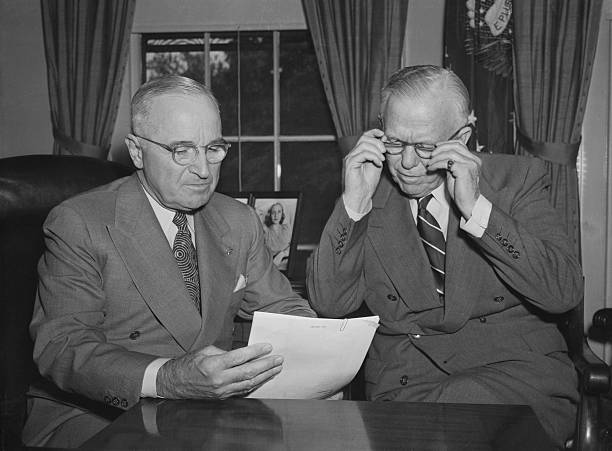