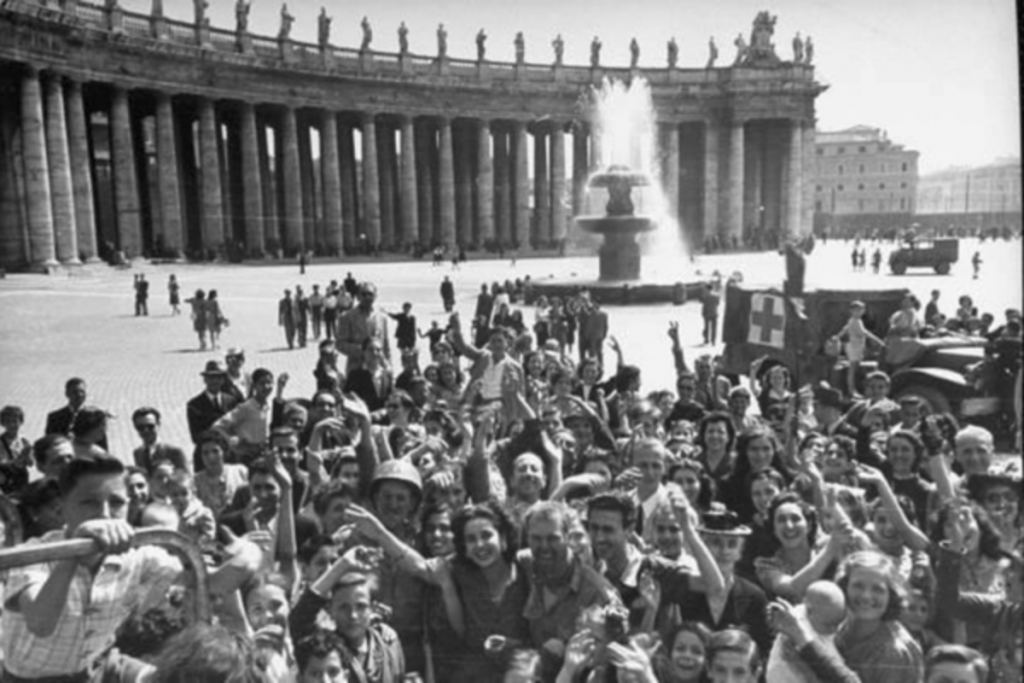 One of the best ways to study and learn about the events and personalities of World War II is through historical fiction.  The genre has produced a myriad of authors of which the late Philip Kerr whose main character Bernie Gunther a sarcastic and wise cracking Gestapo officer from the 1930s onward is special.  Gunther despised the Nazi regime and was able to navigate the politics and horror in his own pursuit of justice.  With the passing of Kerr another author has attracted my attention, Ben Pastor who has created the character of Martin-Heinz von Bora , a Major in the Wehrmacht who finds SS and Gestapo policies to be abhorrent, but believes in Germany and is willing to fight for his country as he did on the eastern front.  Bora is tasked to investigate a series of murders in Pastor’s series and he too must navigate the minefield that is Nazi vendettas and murders.  In Pastor’s third iteration of her Bora novels, A DARK SONG OF BLOOD, Bora finds himself in Italy in early 1944 as the allies are making their way toward Rome and he is assigned to investigate three murders; first a secretary at the German Embassy, Magda Reiner; his former tutor and mentor Cardinal Hohmann; and Baroness Marina Fonseca, a close friend of the Cardinal.

(General Mark Clark, Commander US Fifth Army, accompanied by MajGen Geoffrey keyes, Commander US II Corps, proudly stand at the gates of Rome, the prize that Clark had striven so hard to make his own.)

Bora must work with Sandro Guidi an inspector in the Italian Police Department.  The two men have a tenuous relationship that played out in Pastor’s previous novel LIAR MOON, and their attitude toward each other has carried over to Pastor’s new novel.   Bora is a tortured individual as he related to Guidi in imparting his feelings about his brother, a pilot who was killed on the Russian front.  Bora maintains a great deal of guilt as he believes he was responsible for his brother’s death after convincing him to enlist.  Further, he was forced to identify the body after his brother crashed.  Bora is also haunted by his experiences that took place at Stalingrad as Germany sieged the city for over 900 days.  Later in the war Bora would suffer a catastrophic injury losing a hand to a terror explosion in Lagos, Italy which also resulted in a nasty limp.  Bora’s marriage is under a great deal of strain as his wife Dikta resents his service in the army and the fact she has seen him for only three months out of five years of marriage.

At the outset Pastor’s story is a bit uneven.  We know the death of Magda Reiner resulted from a fall from a fourth-floor window at the German Embassy which has reacquainted Bora and Guidi to investigate.  Pastor also introduces an inordinate number of characters very quickly which requires the reader to pay careful attention.  It takes about a hundred pages for the reader to feel comfortable and once the information is digested the novel is easier to navigate as events build upon each other, particularly the relationship between Bora and Guidi.

Bora is a decent man who finds himself in an untenable situation.  He suffers from nightmares and guilt related to the death of his brother and his activities rooting out partisans on the Russian front.  To further unsettle Bora his wife Dikta will visit only to inform him that she has had their marriage annulled.  He is a sensitive person for the most part and all he desires is for the war to end so he can remarry and raise a family.  Guidi, Pastor’s secondary protagonist lives in a rooming house with a series of interesting characters one of which is Francesca, a pregnant young woman who he finds he is falling in love with.  The problem is the identity of the father, possibly Antonio Rau who may be a member of the Italian resistance.  His relationship with Pietro Caruso, the Police Chief of Rome is flawed to say the least and eventually Caruso will fire Guidi and try and have him executed.  Bora will step in to save Guidi, but their relationship remains “iffy” as they try and solve three murders as various Nazi and Italian officials create numerous roadblocks inhibiting their progress.

One of the strengths of good historical fiction is the blending of a story with factual information with real events.  Further, the integration of historical figures and fictional characters is a seamless way to enhance any plot.  Pastor possesses these strengths in abundance witnessed by Bora’s interactions with his superior General Siegfried Westphal who had been an operations officer under General Edwin Rommel and was now Chief of Staff for General Albert Kesselring.  Other historical figures who are intertwined in the story include, Rome’s Nazi SS Chief Colonel Herbert Kappler, Pietro Caruso the Police Chief of Rome, General Maelzer, the Nazi Commandant of Rome, and SS General Karl Wolfe among others.

The suspects in the three murders appear unrelated, but they are numerous.  In the case of Reiner, Pietro Caruso, SS Captain Egon Sutor a former lover, and Rodolfo Merlo, the Secretary-General of the National Confederation of Fascist Unions are all strong possibilities.  As far as the deaths of Cardinal Hohmann and Baroness Fonseca evidence points to a crime of passion and a dual suicide which Bora refuses to accept.

Pastor is able to bring all of these elements to the fore and slowly unravels a plot that brings the murders, Nazi obstructionism, and allied movements together in creating a strong addition to the historical fiction relating to World War II.  In my mind Martin Bora has replaced Bernie Gunther to satisfy my need for a World War II historical fiction fix and I look forward to reading, TIN SKY, Pastor’s fourth novel in the series which shifts to events in the Ukraine.