To date there have been countless books written about Donald Trump’s machinations.  They seem to cover all aspects of his presidency, personality, and private life.  They range from psychological profiles, the women he has been involved with, his career in business, his election in 2016, his presidency, and finally his defeat in 2020 and its ramifications for the American people.  The books are written mostly by reporters who have covered Trump, acolytes, family members, and people that Trump has used.  Most are well written and are supported by author’s research in addition to the facts and reality of living with the MAGA world.  No matter how important each book may be in their own right, none can compare with Mark Leibovich’s new book, THANK YOU FOR YOUR SERVITUDE: DONALD’S TRUMP’S WASHINGTON AND THE PRICE OF SUBMISSION.  What sets Leibovich’s work apart from others is his writing style, which is humorous, sarcastic, caustic, and in its own way analytical.  Leibovich’s narrative encompasses much of the same material as others, but it is in his presentation that makes another rehash of the Trump years palatable.

As he has done in his bestseller, THIS TOWN which dissected the current political culture in Washington, his latest focuses and confronts the leadership of the Republican Party and their minions and appley describes the type of power hungry individuals who have ridden roughshod over the former principles of the GOP and latched onto Donald Trump to maintain their own self-interest and political office. In his entertaining account Leibovich zeroes in on Senators Marco Rubio, Lindsay Graham, Ted Cruz, along with other characters like Rudy Giuliani, Chris Christie, Reince Priebus, among others who seem to dominate Trump’s circle, despite the fact that most previously chronicled their distaste for Trump.  What all of these personages have in common is that they sold their souls to the devil, in the name of the “Donald.”

Leibovich’s profile has a locus that seems to be the Trump International Hotel in Washington, DC.  After reading Leibovich’s account it is hard to distinguish between the importance of the Hotel and the White House.  It is clear that the hotel is the center of power where acolytes, notable members of society, Trump supporters, and administration colleagues gather to make policy and plan what is best for Donald Trump and America in general.

Unlike many of the new books on Trump, personal memoirs by individuals who have seen the light and analyze how the MAGA world has altered American politics, Leibovich zeroes in on the creation of a dangerous culture of submission within the GOP and the nihilism and cynicism that has resulted.  At times Leibovich’s humor and sarcasm dominates the narrative, but in reality his narrative is based on factual information, and it is a serious analysis of what Trump and his MAGA converts have done to America.

Leibovich’s purpose in authoring the book is not to rehash events and personalities that have dominated the news for the last seven years but to tell the story of the ordeal Trump has put this country through – “the supplicant fanboys who permitted Donald Trump’s depravity to be infected on the rest of us.”

Leibovich is correct that the key to Trump’s support in 2016 and 2020 was that his followers saw him as a truth teller, despite the fact he was a habitual liar.   Further, Trump’s appeal in the MAGA world is clear – “Trump’s spool of personal grievances had become their own.  In effect, his narcissism did, too.”  From the outset Trump presented an alternative reality that was supported by the likes of Sean Spicer, Kellyanne Conway, Hope Hicks, Vice President Pence. Mark Meadows, Reince Priebus and a host of many other enablers.  Leibovitch takes the reader through each of these individuals and their role in dealing with Trump, be it the size of the 2016 inauguration crowd, the cabinet meeting when Trump’s appointee kowtowed to their leader, to the clearing of Lafayette Park by the military in order for Trump to have a photo op in front of a church holding a bible.  Leibovich’s commentary is priceless as he describes Hicks – “She has the distinct superpower in her ability to manage Trump, not unlike how a care provider might have a special knack for managing a particular toddler.”

Leibovich has the ability to put on paper exactly what mature  people were thinking in response to Trump’s latest scheming.  Mitch McConnell comes under Leibovich’s lens as the political operator and power hungry person that he exhibits each day.  It is a fundamental problem, but Leibovich makes it acceptable as he describes McConnell’s “zombie walk – stony faced, owlish, and keep walking” approach to responding to the most egregious actions taken by Trump.  McConnell is not the only person to be skewered by Leibovich.  Lindsay Graham is a special target particularly his relationship with Senator John McCain, supposedly his friend and accomplice in the senate.  But his true nature is front and center when McCain passes away and Graham “sucks up” to Trump as he knew how to stroke the president’s erogenous zones, i.e., undoing Obama’s accomplishments and restoring America to greatness.  In a sense McCain’s death was liberating for Graham as he could now be out in the open about what type of person he really is.

Trump converted many lemmings such as Ron DeSantis and Devin Nunes who experienced non-descript careers before attaching themselves to Trump.  Trump had a gift in knowing how to draw in disaffected characters.  Leibovich is correct that in a sense that Trumpism was like “group therapy for conservatives who feel alienated from, and hostile toward, the progressive consensus…Trumpism is, at heart, not a philosophy, but an enemies list.”  Republicans had the remarkable ability to “suspend belief” when it came to impeachment and other issues and illegalities.  They had to or else the Trump smear brigade of Fox News and co, plus supporters would have made their lives miserable.

Leibovich tries hard to find heroes in the Republican Party.  He praises Mitt Romney for voting for impeachment and other comments, but in the end Romney can not overcome his past, just look at his actions in dealing with the “Big Dig” in Boston when he was Massachusetts governor. Perhaps the topic that is most disturbing which even Leibovich’s sarcasm and humor cannot overcome is the rehashing of January 6, 2021.  It is here that the author describes the “land the plane” strategy pursued by the GOP leadership to get the country to January 20th and Joe Biden’s inauguration.  Along the way Leibovitch drills down into the duplicitous and hypocritic Speaker of the House hopeful, Kevin McCarthy.  There is no need to trace his anger at Trump for January 6th to his visit to Mar-a-Lago a few weeks later when he realized he could not be Speaker without Trump.  So off he went to kiss the ring and kowtow once again.  What is most disturbing is that January 6th underscores how extreme Trump’s one way loyalty really is and the contempt he has for those most devoted to him.

If there is a pseudo hero in Leibovitch’s account it is Liz Cheney who despite her conservative credentials and voting record (93% with Trump) is being drummed out of the GOP because of her stand for constitutional principles and democracy.  Be that as it may, we as Americans are stuck.  Even if Donald Trump passed from the scene, Trumpism is embedded in the GOP and almost half the country.  It will be interesting if Attorney General Merrick Garland decides to prosecute Trump, Trump declares for the GOP nomination for 2024, or any matter of things that could rip our country further apart.  One thing is clear in that the Trump acolytes will continue to serve his interests because they correspond with their own need for power and recognition. 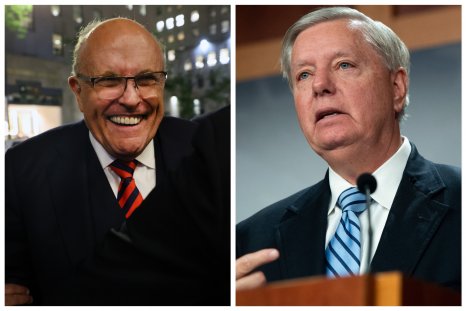