From the outset of his new book MY LAI: VIETNAM, 1968 AND THE DESCENT INTO DARKNESS notable historian Howard Jones argues that the massacre that took place on March 16, 1968 killing 504 Vietnamese villagers “laid bare the war, revealing that it was unwinnable and that, in the process of fighting for democracy and a way of life; America had lost its moral compass.”  .  When it comes to examining American opinion on My Lai one finds that it is split.  On the one hand, during his four month trial Lt. William Calley argued that he was innocent and that he was just following orders.  However, at the time Americans were polarized and the massacre fed opposition to the war, which addition to the Tet Offensive, the invasion of Cambodia, and the Kent State shootings helped unite Americans against the carnage in Southeast Asia and for many it had turned our young men into “baby killers.”  On the other hand, many saw Calley as a scapegoat for a war gone wrong, with a flawed military approach that hindered the prosecution of the war correctly.  Calley’s conviction would harden support for the war and no matter what one’s point of view is the fissures in American society were exacerbated by events at My Lai.

Jones is to be commended for attempting to produce the most balanced and accurate account of the massacre and its aftermath as possible.  He employs all the tools of a good historian by exploring all documentation available, secondary sources on the topic, interviews, and film to present a fair representation as to what happened.  As historians we are aware that total objectivity in reporting and analyzing historical events is almost an impossible task, but Jones comes very close in achieving his goal.  What sets Jones’ effort apart is the availability of Vietnamese accounts which are skillfully integrated into the narrative that were not available for authors who have previously engaged this topic.

Jones does an excellent job in setting the scene of the area known as “Pinksville” where the My Lai villages were located.  It is clear that events leading up to March 16th were fraught with booby traps, land mines, snipers, and other obstacles that resulted in the death of many soldiers.  Jones captures the mindset of men who were ordered to take part in the sweep that targeted the 48th Viet Cong Battalion that dominated the area.  Men were told that Vietnamese civilians would be absent in large part as they usually walked to the market in Quang Nai City, and that the Vietcong force would be double the size of the American units.  The instructions given to American troops by Captain Ernest Medina, Lt. Calley, and other higher ups was poorly conceived and left a number of gaps for troops to deal with.  Jones stresses the relationship between Medina and Calley as a major issue as Medina held a very low opinion of his Platoon commander and often humiliated him in front of the troops.  Jones further stresses the weak intelligence that was provided and orders that zeroed in on a “search and destroy” mission that applied to anything that could possibly be used by the Viet Cong (anything, including civilians who supported the VC). 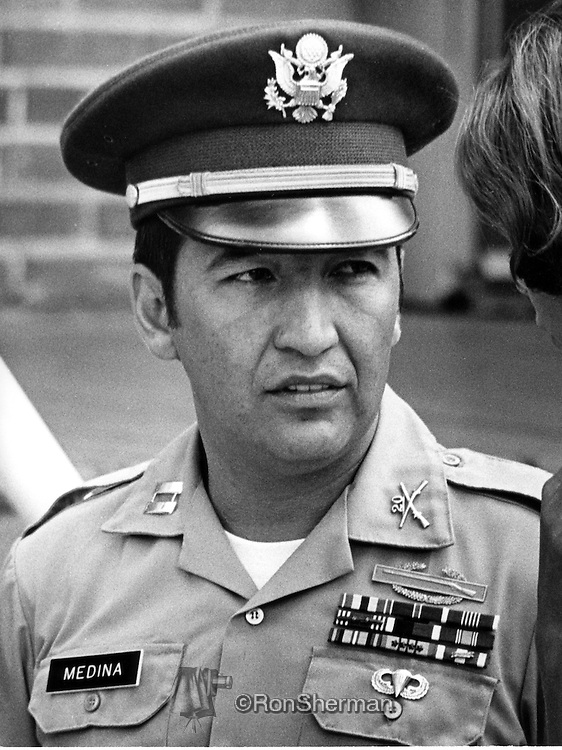 Jones describes what feels like a minute by minute account of the slaughter that took place.  The actions of certain soldiers receives greater attention as they were actively involved in the killings.  Jones has mined trial transcripts, Army reports, and interviews and with a historians eye for detail and lays out that happened on March 16, 1968 in a cogent fashion.  He explores the command structure, personalities involved, as well village life for Vietnamese peasants.  Captain Medina is center stage whose orders were to kill any Vietnamese present, because if they were in the villages they must be Viet Cong.  For Medina “search and destroy” meant burning the villages and killing its inhabitants.  Since the troops were told no civilians would be present, for the soldiers once the killing started it could not be controlled.  For Platoon One under Calley another component was his need to prove himself to Medina.  For Calley the way to impress Medina was the body count.  Taken with racism and fear infused in the men, and Calley’s psychological needs it was a disaster waiting to happen.

At times the reader will become sickened by what Jones describes.  Wanton murder, gang rapes, sadism are all present as Jones relates the actions of deprived men like SP4 Gary Roschevitz, PFC Robert T’Souva, PFC Paul Meadlo and numerous others, a list that is too long to reproduce.  Calley as the officer in charge saw himself as judge, jury, and executioner.  Eventually a number of men refused to continue to take part or refused from the outset.  Men became concerned as Stars and Stripes reporter Jay Robert and photographer Ronald Haberle were present and creating a record of events.

One of the most important characters that Jones introduces is Warrant Officer Hugh Thompson, a helicopter pilot who flew over the battlefield, landed and confronted the perpetrators, and even got into an argument with another officer that almost turned violent.  Once the massacre ended Thompson would report what he witnessed which takes the reader into the second part of the book entitled “Aftermath and Cover up” which is exactly what took place.  Jones does a good job following the trail of “investigations,” written reports, denials, and collusion that was designed to cover up the actions taken by those in charge.  Men like Colonel Frank Barker, Colonel Oran Henderson, and their commander Major General Samuel Koster are seen pursuing an investigation with blinders on.  First, trying to discredit Thompson; Second, obfuscating and fabricating as much as possible in the hopes that the evidence would not produce war crimes; lastly, arguing that 128 Viet Cong were killed, however it could never explain why only 3 weapons were captured, which made no sense and reflected their disparate reasoning.   Jones pinpoints the strategy used to white wash events and zeroes in on the lack of accountability taken by those in command from General William Westmoreland on down.

Perhaps the most important person in pursuing the truth was helicopter gunner Ronald Ridenhour who came in contact with PFC Charles “Butch” Gruver who was present at My Lai in April, 1968.  Gruver told Ridenhour what had happened which conformed to what he saw on the ground during a fly over of the region.  Ridenhour would continue to run into men who were at My Lai, but fearing retribution would wait a year before sending out a five page description of what really occurred to military, administrative, and congressional leaders.  This would finally lead to a series of contacts within the government, one of which was the Inspector General’s Office.  Colonel William Wilson was charged with investigating Ridenhour’s allegations.  Jones follows Wilson’s journey across the United States and as he interviewed a number of former soldiers who had been present on March 16, 1968.  Based on his information General Westmoreland directed Chief Warrant Officer Andre Feher of the Army’s Criminal Investigation Division to conduct an inquiry as to what happened in My Lai.  Jones reproduces important aspects of his conversations with Calley, Thompson, Meadlo and others as well as the Army’s attempt to keep the charges against Calley out of the media.

Throughout the narrative Jones’ presentation is impeccable and it continues as he presents and analyzes the results of the Peers Commission which found that American troops had massacred between 175 and more than 400 Vietnamese civilians.  The commission blamed Major-General Samuel Koster for suppressing information, falsely testifying, and initiating a conspiracy to withhold facts.  Further, it found evidence that Medina and Calley were guilty of war crimes.

The role of the Nixon administration fits the pattern of illegal actions they were engaged in at the time.  Nixon personally became involved as he tried to discredit witnesses to the massacre and believed that Calley was “getting a bum rap.”  Nixon set up “Task-Force My Lai” under H.R. Haldeman to undermine negative press reports.  Nixon’s strategy was to reduce opposition to the war as My Lai was causing the opposite.  He would pressure Senator Mendel Rivers, who headed the Senate Arms Services Committee investigation to discredit witnesses, and the Sub-Committee headed by Senator F. Edward Herbert which zeroed in on Thompson and Colburn.

Jones follows the legal trail that led to a series of trials, though fewer than recommended.  Since many witnesses were unavailable or refused to cooperate, in addition to the defense argument that you could not convict someone for obeying an illegal order held sway making it very difficult to obtain convictions.  The result was that the Army dropped the charges against numerous individuals.  The trials that receive the most attention are those of Calley, Henderson, and Medina.  Jones has carefully examined the trial transcripts and reconstructed the courtroom scenes of each, in addition to the public and military reactions to the verdicts.  In Calley’s case many saw him as a scapegoat for a war no one wanted to fight.  For President Nixon, the verdict was superfluous as he decided to “commute” the sentence before it was even imposed.

Much of what Jones has written reads like a “Grisham” type novel as rape, murder, deceit are all on full display inside and outside the courtroom.  My Lai was the worst massacre in American military history and it deeply affected American politics and society for the years that followed.  One must ask the question was My Lai an aberration or one of many atrocities American troops engaged in.  The answer based on available evidence is no, as there are numerous examples of this type of behavior, but were not on the level of My Lai because of the numbers involved – over 500 dead, a result of the actions of at least 40 American soldiers.  Jones brings his study to a conclusion by talking about the lives of many soldiers including Hugh Thompson, Lawrence Colburn, and many others and how it affected their lives following military service.  The conclusion that can be drawn is we still do not know why allows why people that appear to be normal commit such acts of horror.  Jones has written the penultimate book on My Lai and its historical implications and it should be read by all considering a military career and those civilians who are in charge of the military and are involved in the conduct of foreign policy.