What does one look for in a first novel?  Perhaps an unusual beginning, then a scenario that immediately draws one in and makes you want to continue with great expectation as you are presented with a balance of sarcasm, humor, and seriousness.  These criteria are met in Nathan Hill’s thoughtful new novel THE NIX, which opens with an innovative approach by a woman who leaves her husband and son, followed by a scathing introduction to a Roy Moore type character, a former governor of Wyoming, whose evangelical conservative credentials are impeccable, one Sheldon Packer.  Packer seems to have been attacked in Grant Park in Chicago provoking a satirical YOU TUBE presentation as it shows a CNN type of approach to reporting about “Terror in Chicago.”

This is the tip of the iceberg for Hill as he develops a series of fascinating characters ranging from Hill’s main protagonists, Professor of Literature Samuel Andersen-Anderson who is abandoned by his mother Faye Andersen-Anderson at the age of eleven.  It seems that Faye is the one who attacked former Governor Packer with a handful of gravel and is painted as a 1968 hippie type of radical who was being charged as a terrorist under the aegis of the post 9/11 Patriot Act.  Other characters include, Faye’s father, Frank, an intolerant factory worker, Bethany and Bishop Fall, twins, one of which is a violin progeny, and a brother who is abused by his school headmaster and winds up fighting in Iraq.  Laura Pottsdam represents America’s quintessential college student enrolled in Samuel’s literature class, but has difficulty carrying out the most basic assignment without cheating, but once caught she sees her duty to destroy her literature professor’s career.  Mrs. Schwingke is a Home Economics teacher that offers an interesting perspective on the role of women, particularly in light of the recent sex scandals that have emerged nationwide.  Pwange, divorced and lonely, and one of Samuel’s gaming partners.  Charles Brown, an undercover cop during the Chicago riots that witnessed the Democratic National Convention in 1968 who later becomes an embittered judge confined to a wheel chair.  Alice, a woman who settled along the banks of Lake Michigan who was close with Faye during the summer of 1968, and of course the poet Allen Ginsburg of 0mmmm fame.  Hall of Famer, Ernie Banks, and the famous journalist, Walter Cronkite make their appearances as do many others.

At times THE NIX reads like a John Irving novel with its irreverent approach to society, power, and politics.  Samuel Andersen-Anderson is very unhappy in his position at a university outside of Chicago.  It is here that Hill offers the first of a number of insightful views on America – academic life, administration of, and student participation in university life.  What we witness is the paper chase for tenure, administrators who bend to the will of students, who are not overly interested in education, but more of a free ride through the stepping stone to a successful career.  For Samuel, who had the potential of being a major literary figure earlier in his career, finds himself facing economic ruin if he does not deliver a manuscript that he has been paid for earlier.  The publisher, represented by his agent Guy Periwinkle, wants Samuel to write a book about his mother who in addition to attacking Governor Packer with gravel was supposedly a 60s radical who was arrested for prostitution.  The problem is that Samuel has not seen Faye for over twenty years and she refuses to cooperate with him to fill in the blanks in her life.

In addition to comments on academia Hill integrates views on the role of Hollywood memoirs, the publishing industry, Chicago traffic, high end suburban housing tracts with names like Venetian Hills, elementary school rules and regulations, life in a nursing home, the typical 1950s Home Economics education, life on convoy patrol in Iraq, and a wonderful critique of Disney world among other commentaries.  This approach apart from having a John Irving tinge, also has the feel of Kurt Vonnegut.

Hill offers a detailed description of Faye’s life and how it evolved, then turns to Samuel.  The pivoting point in their lives are clear, for Faye it is when she is eight years old and does not keep the secret of her father’s newly built bomb shelter from the neighbors.  For Samuel, it is when his mother, trapped in a conventional life that she never wanted, runs away from home, offering the advice that “the one you love the most is bound to cause you the worst pain.”  Samuel needs a crutch throughout his life and it becomes a “gaming habit” entitled, “Elfscape,” a vehicle to fill the time gaps in his life and maintain his anonymity at the same time.

Hill creates numerous witty scenes that are quite entertaining, but some of those scenes could be left out reducing the bulk of this rather lengthy novel.  As far as Hill’s grasp of the history of the period he is quite accurate.  His portrayal of the 1968 Democratic Convention and the violence caused by Mayor Daley and the Chicago police is accurate in the confines of blending the history of what actually transpired, and Hill’s artistic license.  To get a true sense of what really occurred see Lawrence O’Donnell’s recent book, PLAYING WITH FIRE: THE 1968 ELECTION AND THE TRANSFORMATION OF POLITICS.*   Hill moves seamlessly between 1968 and 2011 throughout the novel even integrating the Occupy Wall Street movement, the lost idealism of “boomers,” and the emergence of millennials.  The multiple story lines are juggled nicely, and the author has the ability to write so effectively that there is not a boring scene or sentence in the entire book as he journeys back and forth from 1968 and 2011. 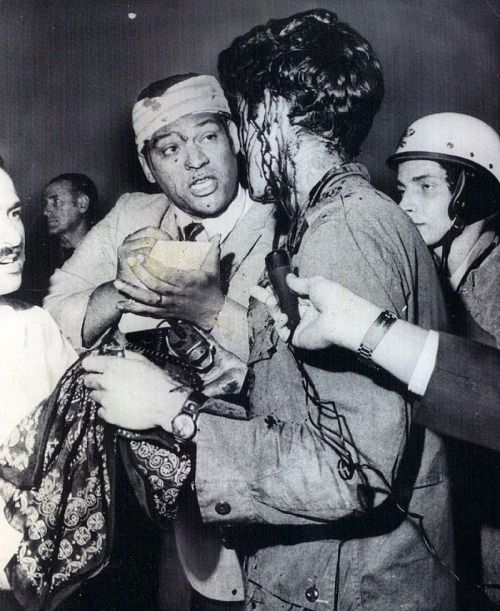 One of the more interesting analogies that Hill proposes resonates today.  During the summer of 1968 Hill argues that protesters and the police need each other equally.  Both groups need an enemy, someone to hate, so they can validate their own actions and beliefs and gain further support.  This is much like today’s politics. Trump and his supporters constantly point to their opponents as un-American and crooks, while Trump’s liberal opposition sees the president as mad, a threat to the constitution, and the implementing the deconstruction of the government.  Each side needs the other to validate their own beliefs and behaviors.  Only when this cycle is broken can the American people move forward.

The question must be asked is THE NIX presenting a tragic-comedy of American contradictions that fostered the election of Donald Trump?  I am afraid the answer is yes, and through Hill’s dialogue and characters we can gain insight into a president who emerged from a career in New York real estate that brought his emotional baggage and personality flaws to the White House.  THE NIX is a wonderful book, so sit back in a relaxing chair, with gentle music in the background, and enjoy the ride.

(Rioting outside the 1968 Democratic Convention in Chicago)