Bienville, Mississippi is the site of Greg Iles latest novel.  Fresh off the success of his NATCHEZ BURNING trilogy, Iles’ latest effort CEMETERY ROAD describes a town of about 36,000 people which is about to further its recovery from the economic downturn in the early 1990s and the 2008 collapse as it appears a Chinese conglomerate is about to build a paper mill in town.  Azure Dragon Paper Company will provide numerous jobs, many high paying, in addition to a new interstate highway that will run from El Paso, Texas to Augusta, Georgia that will pass over a new Bienville bridge.  All seems to be positive until one individual, an archeologist named Buck Ferris is murdered.  It seems that Ferris has found evidence of an ancient Indian civilization at the site of the new factory complex and if his discoveries pan out then the area could be declared a UNESCO historical preserve thereby threatening Bienville’s economic future.

When one begins a Greg Iles’ novel there are certain expectations.  In his latest effort they are all met.  An intense plot that delves into the characters past history, a crime that is hidden amongst many layers, the Mississippi landscape that encompasses the 1960s to the present, and a flawed protagonist, this case, Marshall McEwan, a newsman and commentator from Washington who returns home to Bienville.  McEwan is a brilliant reporter who carries a great deal of personal baggage ranging from guilt of his brother Adam’s drowning when he was fourteen, the death of his own son, also named Adam at two years old in a swimming pool, divorce, numerous affairs, and a dying father who still blames him for the death of his eldest son.  McEwan returns home to try and ease his mother’s burden with the approaching death of her husband, and possibly bringing to resolution the void in his relationship with his father.

McEwan takes over his father’s newspaper the Bienville Watchman and has written an article that the town’s elite, known as the Poker Club, find extremely uncomfortable as it explores Ferris’ work and findings and what it might signify.  Once Ferris, who helped McEwan deal with his brother’s death and became his surrogate father when his own father shut him out is murdered Iles’ begins to unpack a powerful plot that feeds numerous tributaries.

Ile’s is an expert at blending past relationships and the history of his characters with contemporary events. Ile’s talent also extends to his character development and how individuals interact as the story unfolds.  The author has created a number of interesting personages as events build upon each other.  The Matheson family, the powerful timber baron patriarch Max, and his son Paul who had saved McEwan’s life while both were in Iraq, who now suffers from PTSD.  Jet Matheson, Paul’s wife also happens to be McEwan’s lover, a rekindling of a relationship they began as teenagers.  Denny Allman, a fourteen-year-old technology “genius” who operates his own drone and has latched on to McEwan as a surrogate father when his own has abandoned him and his mother.  Nadine Sullivan, bookstore owner, lawyer, and longtime friend of McEwan’s. Byron Ellis, the Tenisaw County Coroner.   Members of the towns ruling cabal called the Poker Club, Tommy Russo, Casino owner; Wyatt Cash, Prime Shot Camping Gear owner; Claude Buckman founder of Bienville Sothern Bank; Blake Donnelly, oil baron; Arthur Pane, former county attorney; and Avery Sumner, former circuit judge and current US Senator.  This group is described as a “predatory banker, an old-time oil tycoon, a newly minted US senator, an entrepreneur with ties to the US military, and a sleazy lawyer,” all very accurate descriptions.

It seems that a number of characters face moral and ethical dilemmas as the story unfolds.  The situation revolves around the future of Bienville.  How should Jet Matheson divorce her husband and still keep custody of her son as she is up against the power of her father-in-law?  What should Matthew McEwan publish concerning the murder of Buck Ferris and the dirt surrounding members of the Poker Club?  After the murder or possible suicide of the spouse of a Poker Club member, how should the accused be defended in court and what are the ramifications of the case for the town?  How does one keep a family together when dark secrets rip it a part?  Lastly, how does one deal with corporate interest versus the needs of the local population? 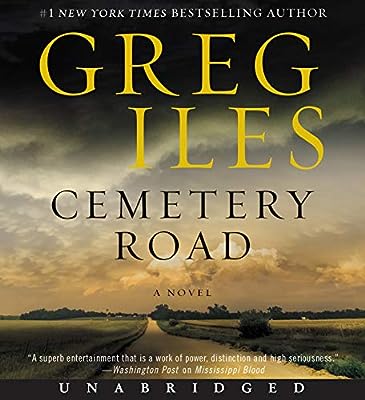 There is an important contemporary aspect to Iles’ approach.  He frames his dialogue well and uses it to inform the reader of important opinions that he holds.  His digression dealing with the state of the newspaper and media industry is important as he chronicles its decline as it now seems to only resort to entertainment and certain types of news anchors.  Further, he repeatedly skewers the Trump administration for its moral and ethical decay and voices his concern for the future because of the damage emanating from Washington.

Iles develops all of these concerns very carefully as he builds the tension as the diverse interests of his characters come into conflict.  The storyline will keep the reader riveted to their seats as they press on, and the final resolution of the issues raised will come as a surprise.  In reading Iles’ work from his NATCHEZ BURNING trilogy and now with CEMETERY ROAD I am reminded of the work of Pat Conroy.  In this new book Iles has delivered an absorbing novel that displays the grief, betrayal and corruption of a small southern town, a story that I highly recommend.