Today we find ourselves living in an America where the Republican Party seems to stand for voter suppression (see Pennsylvania, Arizona, and Georgia state legislature just to name a few) as they try and place as many obstacles in the path of African-Americans who would like to exercise their franchise.  The strategy is clear – they fear they cannot win elections without making it difficult for minorities to vote and reminds this writer of the Jim Crow era and harkens back to the post-Civil War period, particularly after the election of 1876 as southern politicians began to reassert control of their region and try and undo the gains brought forth by the 13th, 14th, and 15th amendments for African-Americans.  The post-Civil War southern leaders worked to undo the life’s work of Pennsylvania Congressman Thaddeus Stevens who fought against slavery and tried to uplift the lives of those freed from bondage.  Stevens, an athame to the south is the subject of a new biography by Bruce Levine, THADDEUS STEVENS: CIVIL REVOLUTIONARY, FIGHTER FOR RACIAL JUSTICE.

At a time when the Black Lives Matter movement is confronted by white supremacy and voter suppression it is important to examine the life of Thaddeus Stevens whose ideals and hopes for racial harmony and justice have still not come to fruition almost 150 years later.  Many historians and films have denigrated Stevens as a vindictive persecutor of the helpless and defeated south.  It took the Civil Rights Movement of the 1960s and a new generation of historians and film makers to reconsider Stevens’ role following the Civil War and Reconstruction.  Levine stresses Stevens’ vision for an egalitarian radical revolution following the war – confiscating the estates of large southern landholders and divide them among former slaves.  Further he would come to despise President Andrew Johnson who tried to assist the southern elite to recoup their political power and once again place former slaves under the thumb of the previous system where they were supplicants to a southern system that could not function without them. 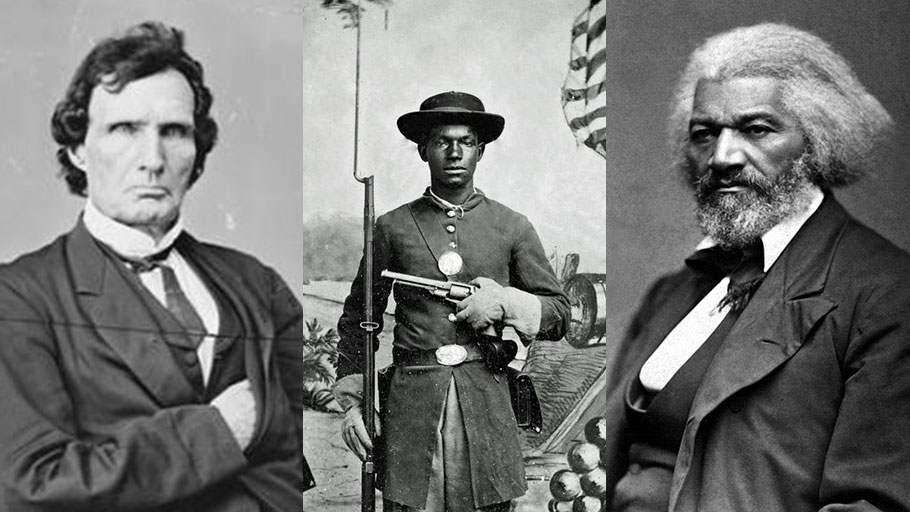 Levine focuses on Stevens’ role as a public figure, his fight against chattel slavery and racial discrimination, the key part he played influencing union actions during the Civil War, and his important role in the post-war struggle to produce racial democracy for the nation at large.  Stevens was raised in Vermont in a strict Baptist home though he would later have little use for religion.  Despite this he was knowledgeable when it came to scripture and he viewed secession and war as “predetermined” and inevitable.  This went along with his dark view of human nature and can be seen in his commentary throughout his life and the relationships he engendered.

Stevens was a firm believer in industrial development as an engine of human progress and that the government must actively and deliberately stimulate the development of capitalism, especially its commercial and manufacturing sectors as a strong supporter of Henry Clay’s American System.  Second, he believed that the government must take positive steps to ensure that all had an equal chance to partake in prosperity as part of system that rested on “free labor.”

Levine’s narrative is less a biography of Stevens’ complete life, but more of an intellectual journey that reflected the evolution of his ideas and positions taken in regard to slavery, tariffs, and other issues of the day.  The narrative presents Stevens’ life in the context of the world in which he thrived.  Apart from Stevens’ life, Levine’s analysis mirrors many historians who have written about the history of the period.  Nothing is really new, events and movements do not change, nor the actions of certain important individuals.  What is important is Levine’s portrayal of Stevens’ life as he integrates and relied on his subject’s own words and attitudes in speeches before the Pennsylvania state legislature, the House of Representatives, and the memories of those who he conversed with.  His intellectual evolution regarding slavery is a key component of the book as in his younger years he may have been “soft” on abolitionism.  However, following Texas’ application for statehood and the results of the Mexican War Stevens realized as did others who would become Radical Republicans that if the south could not expand slavery into new territories then the erosion of its soil would foster the end of what Kenneth Stamp called the “peculiar institution.”  The key was to prevent any new territories acquired from Mexico from becoming slave states which would harden people’s positions regarding slavery.

Levine takes the reader through all the major events that led to the Civil War, the war itself, and the post-war period.  Levine leads the reader through the rise of the Whig Party, his early participation in the antislavery movement, his part in the founding of the Republican Party, with its opposition to slavery.  He also tracks the machinations of wartime rivalries and the struggle to enact legislation after the war, in addition to the role he played in the impeachment process against Andrew Johnson.  Since the book itself is not overly long I would have hoped the author would have delved more into these areas focusing on analysis of great events as he perceived them, particularly Stevens’ relationship with President James Buchanan.  Once the war broke out Levine is correct that Stevens did not see the war as a short one, but a bloody one that would drag on for years.  For Stevens success in war also included a frontal attack on slavery and a major alteration of southern society and economy.  He was the first to favor the confiscation of slaves, demanded legal freedom for those confiscated, called for a wide emancipation for all slaves living in the rebellious states, and the abolition of slavery throughout the United States.  This would mean a radical transformation of southern society, in effect, as Eric Foner states, a second American Revolution.

According to Levine Stevens success was based on his iron will, great courage both moral and physical, his refusal to bend to the opposition even in the face of physical threats, his mastery of the parliamentary system, his shrewdness, quick wit, and sharp tongue.  Stevens was a believer in the ideas put forth in the Declaration of Independence and despite what the founders wrote into the Constitution regarding slavery he was adamant in his support of the document.  He shaped the 14th amendment as his life ended which provided due process and equal protection under the law for all.  It is a shame that the legislative victories he achieved would quickly fall by the wayside following his death.

Historian Fergus M. Bordewich argues that Levine has written a concise and powerful biography of a man the author truly admires as Stevens sought to create an America free of prejudice, which was based on merit in which blacks and whites together would be freed of oppression, inequality, and degradation.  Stevens’ reputation has improved since the 1960s and reflects that even John F. Kennedy’s praise for Andrew Johnson and his description of Stevens as “the crippled fanatical personification of the extremes of the Radical Republican Movement” in his book co-authored with Theodore Sorenson, PROFILES IN COURAGE was totally wrong.  Stevens pushed for Reconstruction as hard as he could and if others had not grown tired of it and reverted to previous attitudes perhaps, we would not suffer from the racial bifurcation that infects American society today.