Anyone familiar with the life of Joseph P. Kennedy, the father of John, Robert, and Edward Kennedy is aware of the flaws in his character and life story.  These elements of his biography have been fully explored in studies like David Nasaw’s THE PATRIARCH: THE REMARKABLE LIFE AND TURBULENT TIMES OF JOSEPH P. KENNEDY, Richard J. Whalen’s THE FOUNDING FATHER: THE STORY OF JOSEPH P. KENNEDY, and Doris Kearns Goodwin’s THE FITZGERALDS AND THE KENNEDYS: AN AMERICAN SAGA.  Kennedy’s life story is punctuated with “serial philandering,” a relationship with organized crime, his years as a Wall Street operator highlighted by repeated insider trading, lobotomizing his daughter Rosemary, an appeaser’s isolationist view of the world that led to his opposition to the Truman Doctrine, the Marshall plan, a cozy relationship with J. Edgar Hoover, and a world view that saw fascism as a means of overcoming a depressed economy and a means of combating communism.  All of these aspects of his life’s work have been dissected in the three previous works mentioned.

One area, his role as American Ambassador to the Court of St. James, a position where Nasaw describes Kennedy as the worst American diplomat serving US interests in England to have ever served across the Atlantic becomes the central theme of Susan Ronald’s latest book, THE AMBASSADOR: JOSEPH P. KENNEDY AT THE COURT OF ST.JAMES, 1938-1940.  In her monograph, Ronald explores the charges against Kennedy that he was an anti-Semite, a Hitlerite appeaser, an isolationist, and an admirer of what the Nazis achieved in Germany and reaches the same damning conclusions as previous historians.

The Kennedy family mystique has been carefully crafted for decades by family members and their acolytes.  However, Kennedy’s true belief that fascism was the inevitable wave of the future, leading him to consistently misrepresent American foreign policy as he intentionally ignored instructions from President Franklin Roosevelt and Secretary of State Cordell Hull as he substituted his own beliefs and opinions in place of those instructions.

Ronald was born in the United States and later emigrated to Great Britain is the author of a number of historical works.  She has mined the riches of the British and American archives and has become very knowledgeable concerning the wealth of secondary materials that have been written on her subject.  Ronald has prepared a readable work for the general public and a bit less so for the professional historian since she does not really uncover anything that is new and repeats arguments and thesis put forth by others.  But to her credit the narrative offers a fresh synthesis concerning Kennedy’s work as ambassador as she mirrors a great deal of the work that has come before her new publication. Her views are supported by others that Kennedy lacked the “temperament, training, and willpower” to serve in his diplomatic post.

Ronald’s narrative concerns a man who by March 1940 had reached the pinnacle of his  career in public service and by October of that year he would return to the United States to seek revenge against Franklin Roosevelt who he believed treated him poorly as Ambassador, ignored his views on the coming war, and not supporting him in a manner that he felt his position warranted.  On numerous occasions Kennedy lectured the president and he would alienate the White Staff, members of the State Department, especially the Secretary of State, and the British diplomatic establishment and government.

Kennedy’s revenge centered around his support for the Republican nominee for president in 1940, Wendell Willkie, in part driven by his desire to run for president himself as a Democrat.  After Roosevelt’s election to a third term in November 1940 Kennedy dedicated himself to keeping the United States out of the war offering opinions that argued the US could not survive economically if she joined the conflict.

Kennedy was originally appointed Ambassador to Great Britain on February 18, 1938, as a reward for supporting Roosevelt’s candidacies for president in 1936 and earlier he was repaid for his support in 1932 as the head of the newly created Securities and Exchange Commission, a poor substitute for the office of Secretary of the Treasury which he coveted.  Kennedy had no experience as a diplomat and did not have a foreign policy background.  His driving ambition was to acquire wealth.  From his youth he believed he was discriminated against because of his Irish-Catholic roots creating a chip on his shoulder to achieve societal acceptance.  Once married his focus was to create a springboard for one of his sons to become president.  Based on Kennedy’s abrupt, opinionated, and “undiplomatic” personality he did not possess the skills to head such an important foreign posting.  Roosevelt was aware of Kennedy’s issues, and he wanted him out of the country where he believed he would cause less political trouble had he been chosen for a domestic position.

For Kennedy, the ambassadorship to a major Protestant country could help him improve his Bonafede which could assist him in running for president in 1940 as an Irish-Catholic. Kennedy was up against an administration whose members would have no use for him and resented his constant outspoken criticisms.  What was in Kennedy’s favor was the need to negotiate a Reciprocal Trade Agreement with the British.  New York Times reporter and Kennedy confidant, Arthur Krock pushed Roosevelt to appoint him by leaking an appointment before the decision was even made.

Once in England, Kennedy collaborated closely with British Prime Minister, Neville Chamberlain and supported his pro-fascist views and appeasement policies as he would do nothing to aggravate German Chancellor Adolf Hitler by preparing England for a war.  Ronald does a respectable job laying out the views of the English royal family and members of the government who came to despise Kennedy. A case in point was King George VI detestation of Kennedy who feared if he returned to the United States he would rile up isolations to the detriment of England.  Further, during the German aerial “Blitz” over London Kennedy acquired the nickname, “Jittery Joe” as he sequestered himself in a country estate and refused to inspect the damage that befell London. Overall, the British people viewed him as a coward.

She does equally well in describing Roosevelt’s true feelings toward Kennedy and tracing the highs and lows of their relationship.  Kennedy’s “uninhibited manipulation of the press, his speaking out against the president, and passing his own opinions for State Department policy” had ruled him out for Roosevelt’s support, particularly after Kennedy “dressed down” the president in a White House meeting on June 23, 1938.  In the end Roosevelt told Eleanor that “I never want to see that son of a bitch again as long as I live.”

Kennedy’s errors were myriad.  He never informed Roosevelt, Hull, or the State Department that English Foreign Secretary Lord Halifax had broken with Chamberlain over the appeasement of Italian dictator Benito Mussolini in addition to Hitler.  Further, while in New York he informed German Foreign Minister Joachim von Ribbentrop on June 10, 1938, that he would try and mitigate American press reports that criticized Germany and would work to keep the US out of any European war.  Lastly, Kennedy’s anti-Semitic comments are legendary, particularly statements to Herbert von Dirksen, the German Ambassador in London.

Roosevelt and Hull would keep Kennedy out of the loop as much as possible because the last thing they wanted was for him to return home creating havoc as the administration worked to deal with an isolationist Congress and overturn Neutrality legislation.  Interestingly, the British would have been glad to send him packing as they grew tired of his bombastic statements, defeatism, particularly before and after Dunkirk, including criticisms that they referred to as “Kennedyianas.”

Overall, Ronald’s book is a mixed bag.  At times she delves into her topic as a true historian evaluating historical events, important characters and their motivations, and explaining British and American politics as the Germans moved closer to war.  Obviously, the key figure is Joseph P. Kennedy whose machinations were designed to further his own political career and those of his sons, and the needs of his family.  All the major figures of the period are on full display as are lesser ones.

It is the latter group that detracts from the narrative.  There are a two chapters that deal with British society as well as references to the “London social season,”  the types of china and cutlery used at dinner, the menus provided, the types of jewelry worn, estate/house decorations among many aspects of minutiae which after awhile become tedious and difficult to digest which detracts from her historical analysis.  Ronald’s approach in this area serves no purpose for the overall thesis she presents and most of it could be excluded resulting in a more compact work of history.  Ronald should pay less attention to the frivolities of British society and Kennedy family excursions and focus more on the critical issues that Kennedy’s tenure in England involved. 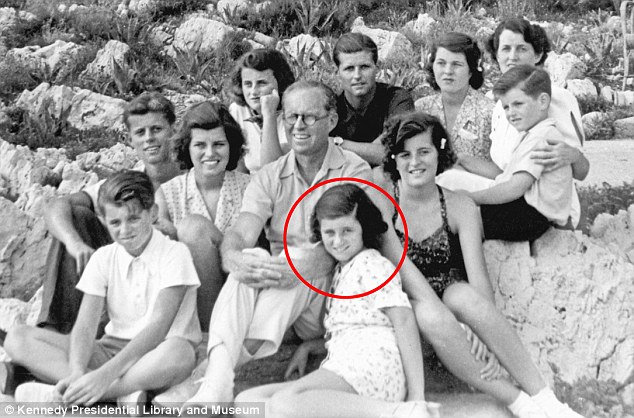 (Joseph and Rose Kennedy married in 1914 and had nine children together. Pictured above on a vacation to France in 1939 is (from left to right back row) Kathleen, Joe Jr, Rosemary, Rose , Edward (Ted), (left to right middle row) John (Jack), Eunice, Joseph Sr, Patricia, (left to right front row) Robert and Jean)