(Marie Colvin in the Chechen Mountains, 1999)

“Why do I cover wars…. It is a difficult question to answer.  I did not set out to become a war correspondent.  It has always seemed to me what I write about is humanity in extremis, pushed to the unendurable, and that it is important to tell people what really happens in war—declared and undeclared.” (Marie Colvin, The Sunday Times, Sri Lanka, April 22, 2001)

Lindsey Hilsum’s new biography of Marie Colvin is a stark reminder of the plight of journalists in our ever-dangerous world.  According to the Washington Post at least 43 journalists were killed in 2018 with another 12 deaths whose causes are not totally clear.  The role of a journalist is to report the news as accurately as possible so citizens can make intelligent judgements about world events.  The life of Colvin presented in IN EXTREMIS: THE LIFE AND DEATH OF THE WAR CORRESPONDENT MARIE COLVIN reflects that dedication and commitment to that truth.  Hilsum, international editor for Channel 4 News in England is the perfect candidate to write about Colvin’s life as she herself covered wars and conflicts in the Middle East, the former Soviet Union, and Africa.  The recent murder of Washington Post reporter Jamal Khashoggi by the Saudi Arabian government reflects the danger journalists face.  The evidence points to the murder being ordered by the Saudi Royal Prince, Mohammed Bin Salman because of Khashoggi’s negative reporting of Saudi policies.  In this case a journalist was not killed on the battlefield, though in a sense he was.  In Colvin’s case she would give her life reporting from Homs, Syria district of Baba Amir, killed by an artillery attack in 2012 during the civil war that continues to this day. 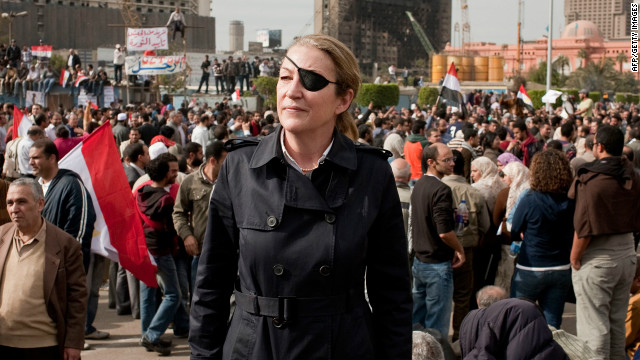 Colvin was raised in a comfortable middle-class Catholic family on Long Island, a lifestyle she would totally reject after studying with legendary journalist John Hersey at Yale and move on to a dangerous yet rewarding career as a war correspondent.   Hersey was one of the first individuals who impacted Colvin’s life and work.  Another, her role model, Martha Gellhorn whose work during World War II was exemplary.  Hilsum meticulously chronicles Colvin’s relationships and how they affected her love life and career.  Perhaps the most important being Sunday Times correspondent, David Blundy.  This bond was less sexual and more of a lifetime friendship as they shared the same approach to their work, humor, and the way they approached the world.  Hilsum details other important relationships pointing out their importance to Colvin’s life and work which both seemed conceived as a war zone.  Colvin was married twice to husbands who repeatedly lied to her, had her own series of affairs and one-night stands, suffered miscarriages, and would resort to alcohol to deal with her pain.

Colvin’s big break came in 1985 as a UPI reporter she was sent to Morocco with other journalists to witness the celebration of King Hassan’s twenty-five-year reign.  This morphed into an assignment in Libya as its leader, Muammar Gaddafi, the self-declared revolutionary and supporter of terrorism decided to engage the United States in a manner that could only bring President Reagan to respond with overwhelming force.  During their relationship Colvin was able to score several interviews with the Libyan strong man, and while avoiding his sexual advances enabling her to explore his rogue ideology and what he might do next.  Hilsum delves into how Colvin conducted interviews and developed her approach to revolutionaries, terrorists, or as they described themselves, freedom fighters.   For Colvin, her reporting was designed to focus on “the role and feelings of the individual in the collective violence of war.” (56) 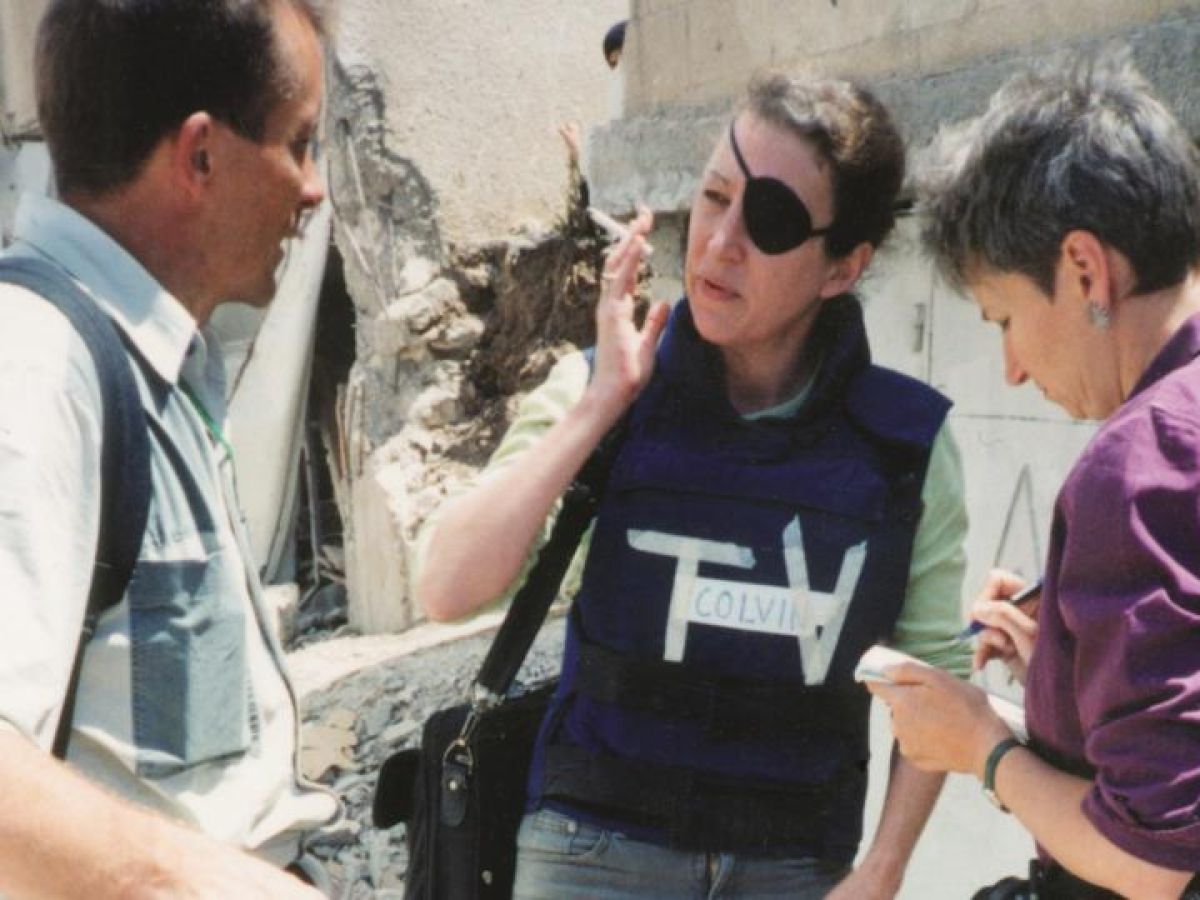 Hilsum’s approach reflects Colvin’s dedication to her craft and the dangers she faced on a regular basis.  Be it confronting Muammar Gaddafi, her special relationship with Yasir Arafat, or interviewing other individuals who rebelled against existing power structures.  The reader is presented with an inside look at the pitfalls and obstacles journalists like Colvin faced each day in Libya, Iraq, Israel, Kosovo, Chechnya, East Timor, Afghanistan, and finally in Syria over the last three decades.  Hilsum relies on over three hundred journals maintained by Colvin, interviews with her peers, and impeccable research to construct a fascinating picture of Colvin’s private life and career which she had difficulty keeping separate.

Hilsum does a nice job presenting the background history of each conflict area Colvin explores.  The author tries to explain the myriad factions in Lebanon as Beirut is divided at a green line with Maronite Christians, Amal,  Palestinian groups, bourgeoning Hezbollah all backed by different powers be it Iran, Russia or Syria.  In dealing with the Israeli-Palestinian conflict, Hilsum bores down deep to explain its origins, the constant explosion into violence be it the Intifadas, the wars against Hamas, and the attempts at peace.  Hilsum describes Colvin’s approach to reporting as other journalists would file from the relative safety of Paris and Cyprus when covering Middle East tension, Colvin would get up close and want to experience events before she reported.  Danger be damned, as her journalism was distinguished  by her personal experience and she would become part of the nomadic group of journalists who wandered the landscape of the Middle East.

For Colvin the Middle East held a tremendous fascination which explains many of her stories.  She was able to develop a trusting relationship with the elusive Yasir Arafat and interviewed him over twenty times.  Hilsum describes the arcane nature of Palestinian politics and the reclusive nature of the Palestinian Chairman.  Arafat is the perfect example to study as Colvin had the uncanny ability to get people to speak to her.  Colvin’s reputation was secured as she was able to sneak into Basra in 1986 during the Iran-Iraq war, Beirut during the 163-day siege of the Bourj al-Barajneh refugee camp in 1987, and her reporting helped create world pressure to get the Syrians to force their surrogates to stop the fighting.  The following year her stories describing the first Intifada against Israel reaffirmed her status as a war correspondent.  Colvin was not known for her stylistic approach to writing, but she got the facts and the human-interest component, at times leaving it to her editors in London to fit the puzzle of her reporting together in a more coherent whole. 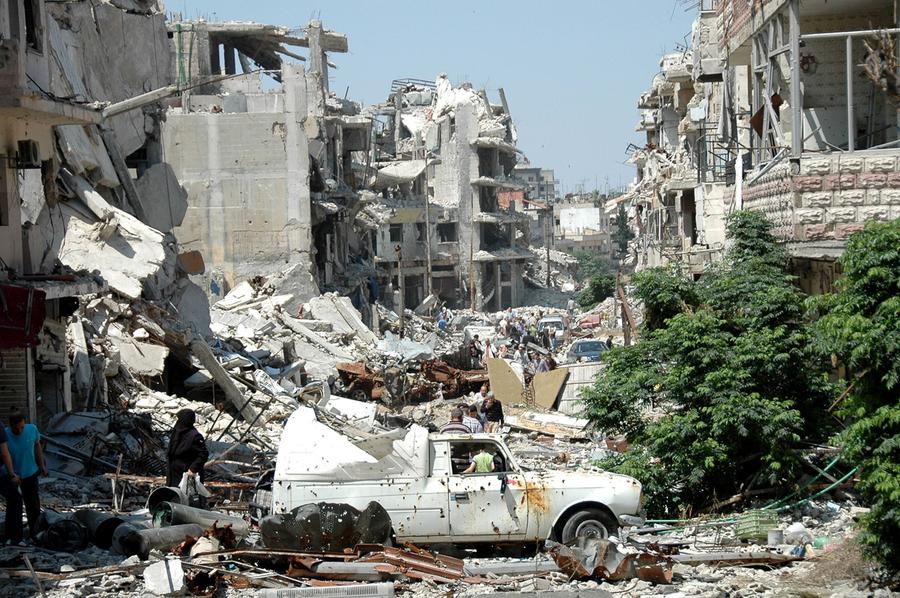 (Homs, Syria where Colvin was targeted and killed by Syrian intelligence in 2012

The years 1998 through 2001 found Colvin moving from what area of conflict to another with seemingly no time in between.  1998 saw her in Kosovo reporting on the devastation caused by Serbian nationalists. 1999 revolved around Indonesia as rebels in East Timor declared their independence.  Later that same year Colvin moved on to Chechnya as the new President of Russia, Vladimir Putin decided to crush Chechen rebels who had broken away from Russia during the collapse of the Soviet Union.  Finally, becoming involved in the Sri Lankan Civil War where she was shot trying to leave a Tamil rebel held area, resulting in a loss of her eye, and a deep depression as she tried to recover physically as well as emotionally.

Hilsum chronicles Colvin’s eventual psychological spiral as she was diagnosed with post-traumatic stress disorder for which she received treatment.  But her developing alcoholism was never treated.  As Hilsum vividly explains, “She could not unseen what she had seen, and he [a colleague] feared she was losing her ability to distance herself from horror.”  (Washington Post, December 21, 2018)  As Colvin describes herself in a November 12, 2010 piece it was difficult to distinguish between bravery and bravado. (294)

Colvin was a remarkable woman who had many irreconcilables demons within, but she found herself to a large extent as a war correspondent that made life, at times tolerable.  She witnessed and personally suffered a great deal of sadness and joy in her life, but her work is a testament for what journalism can accomplish, and the hope that those in power will care when reporting reaches the newspapers, websites, or television.  Hilsum has done an excellent job capturing the essence of who Colvin was and how she made her life meaningful.