(The evacuation of the wounded from the Battle of Hue` in February, 1968)

For those who enjoyed Mark Bowden’s works such as BLACK HAWK DOWN, GUESTS OF THE AYYATOLLAH, and KILLING PABLO, his new book HUE`, 1968 should be prove to be just as satisfying, if not more.  Bowden relies on the same assiduous research, exemplified by his interviews with all sides of the conflict; American Marines and decision makers, North Vietnamese soldiers and commanders, in addition to civilians caught in the conflict.  Bowden’s fluid writing style along with his in depth knowledge of what transpired in Hue` has created the preeminent account of the 1968 Tet offensive, concentrating on the seizure of the ancient city of Hue`, and the American/ARVN (South Vietnamese) retaking of the city that came at an extremely high cost in terms of casualties and treasure.

Bowden zeroes in on the major players in the war as well as the ground troops who were the main combatants and the civilians who were caught in the crosshairs of the battle.  Bowden correctly excoriates General William Westmoreland, the American commander in charge of the war.  Westmoreland became obsessed with kill ratios and/or body counts to measure American progress.  By the end of 1967 he grew very encouraged that the war was close to an end and instead of taking into account the facts on the ground and cracks in American intelligence he continued to see battles in terms of numbers rather than the ability to maintain control of territory, and who the Vietnamese civilians actually supported.  Westmoreland was convinced that an attack was in the offering, but that it would come at Khe Sanh, and was caught completely by surprise at the strength of the offensive and the fact that Hue` had fallen to the enemy.  At the outset he had shifted US forces around depleting certain areas, thus facilitating the success of Tet.  Westmoreland suffered from the same tunnel vision that most American commanders and politicians, in that they equated indigenous nationalism with communism throughout the Cold War, resulting in the war in Southeast Asia.

(Don McCullin, a shell shocked Marine at the Battle of Hue`

Personal stories abound be it Che The Mung; an eighteen year old girl whose sister was killed and father imprisoned by the ARVN who became a member of the Viet Cong at age twelve.  Her role was to help prepare for a general uprising in Hue once the offensive began and lead soldiers into the city which she knew like the back of her hand.  We become familiar with a number of American commanders and lesser officers in addition to the “grunts.”  Their personal stories are told and many stick out like Lt. Andrew Westin who enlisted after being married eleven months and found that his efforts to avoid Vietnam were dashed when he was ordered to join the 7th Cavalry.  Bowden makes good use of the daily letters he sent to his wife Mimi back in Ypsilanti, MI and they afford the reader a clear vision of what it was like for American troops.  Richard “Lefty” Leflar, an eighteen year old who grew up outside Philadelphia who had difficulties staying out of the courts, joined the Marines and was dropped into the battle to retake Hue` in mid-February 1968.  We witness the carnage and the brutality of the battle to retake Hue` through Leflar’s perspective and it is not pretty.  Commanders like Colonel Dick Sweet and Lt. Col. “Big” Ernie Cheatham who helped command “on the ground” the US effort to retake Hue will find their stories told in depth, as are reporters like New York Times Saigon bureau chief Gene Roberts whose writings were the first to educate the American people with what was actually happening in Hue.  CBS news anchor Walter Cronkite visits the battlefield during the Tet Offensive and after learning the truth of what was occurring on the ground changes his view of the war – with the most trusted man in America reporting events President Johnson was shaken.

Bowden has done a masterful job in recreating the North Vietnamese preparation and assault on Hue`.  The reader is provided an excellent assortment of maps to follow and understand troop movements.  His narrative is enhanced as he tells the story, in part, through the eyes of Nguyen Van Quang Ha and his team who lived in a hole with a thatched cover that made them invisible to US air assets.  As Hue` became the one place in South Vietnam that most directly contradicted Westmoreland’s assurances, President Lyndon B. Johnson began to question his commander’s conclusions.  Clark Clifford’s description in his memoir COUNSEL TO THE PRESIDENT aptly describes Westmoreland’s request for 206,000 more troops in February 1968 and Johnson’s reaction that led to his withdrawal from his presidential reelection campaign at the end of March.  As a result Westmoreland would finally be fired by the president.

Bowden recreates American preparations to retake Hue` very carefully.  His analysis is based on interviews with the participants from both sides.  The difficulty in retaking the city was captured by the phrase, “learning by trial and tragically bloody error…..[as] they all grew accustomed to the smell of death,” civilians, enemy soldiers, and fellow Marines alike.  After reading Bowden’s account of the urban warfare in Hue one wonders about events in Mosul, Iraq today as American forces were not well trained or equipped for street to street warfare.  American Marines had not confronted this type of “room to room, hand to hand” combat since Seoul in 1950.  In fact Bowden is quite correct in stating that the American command was caught completely flatfooted as they believed that such “ a swift and cunning coup was unimaginable.” When confronted with the enormity of Tet, and how severely they underestimated what they were up against as they tried to retake the city with many Marines being sacrificed.  Bowden stresses the ignorance of American commanders who gave many orders without any real knowledge of the actual situation in Hue`  No matter the carnage to US troops many commanders, especially Westmoreland “seemed almost oblivious to the largest single battle of the Tet Offensive, if not of the entire war, underway in Hue`.”

What the Tet Offensive showed was the ability of the enemy to prepare a clandestine attack that was a remarkable feat of planning and coordination, and that the enemy could reach any part of the country it wished, but in the end the invaders made no lasting gains.  What they accomplished was providing fodder for the anti-war movement in the United States, creation of doubt in many Americans and their politicians as they achieved a psychological victory, not a military one as the expected “rise of South Vietnamese civilians” against the Diem regime never occurred.

Bowden also explores the uglier aspects of war.  American atrocities are described as is the racism that existed by both sides.  Substance abuse is also discussed as for many soldiers it would have been difficult to survive without using drugs.  One of the most haunting aspects that Bowden addresses is the issue of grief, something that there was not time for in Hue.  Death hovered over each combatant and was a daily occurrence, and when one soldier went down, their compatriots did not have the time to deal with it properly – a price that would be paid on the battlefield, and if they were lucky enough to survive, when they returned home.

If there is one major criticism of Bowden’s work it is that the author is determined to include almost every experience the combatants were involved in.  The result is that at times the flow of the narrative becomes somewhat disjointed.  However, this should not detract from the overall quality of his work as he has produced a prodigious account of what occurred in Hue`, particularly in the context of the overall war itself.  Bowden has produced the most complete account of Tet and the Battle for Hue` that has been written and his approach should satisfy historians and the general reader alike. 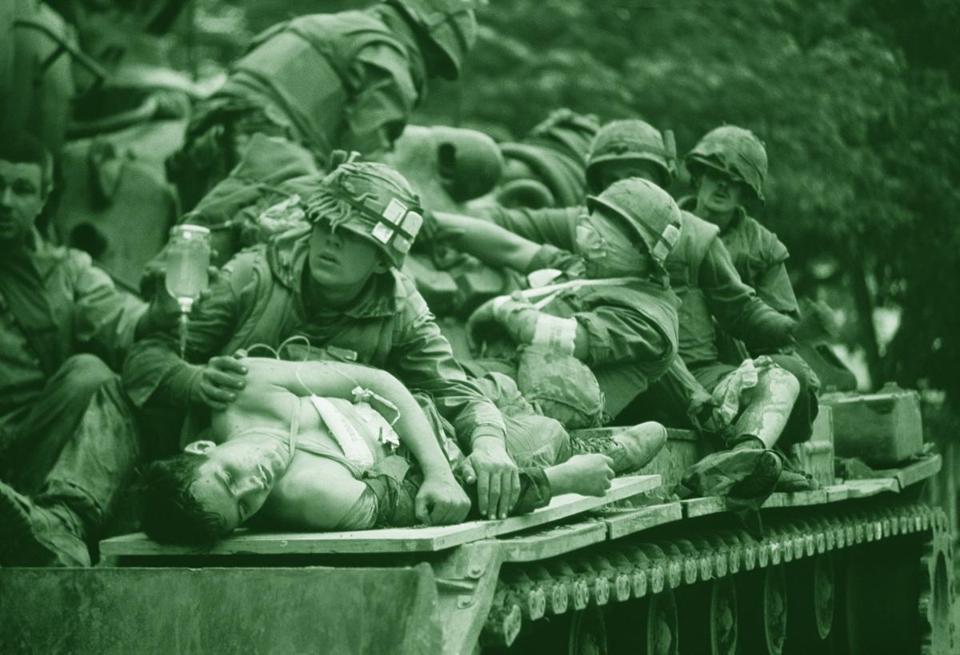 (The most iconic picture of the evacuation of US Marines from Hue` on February 17, 1968)