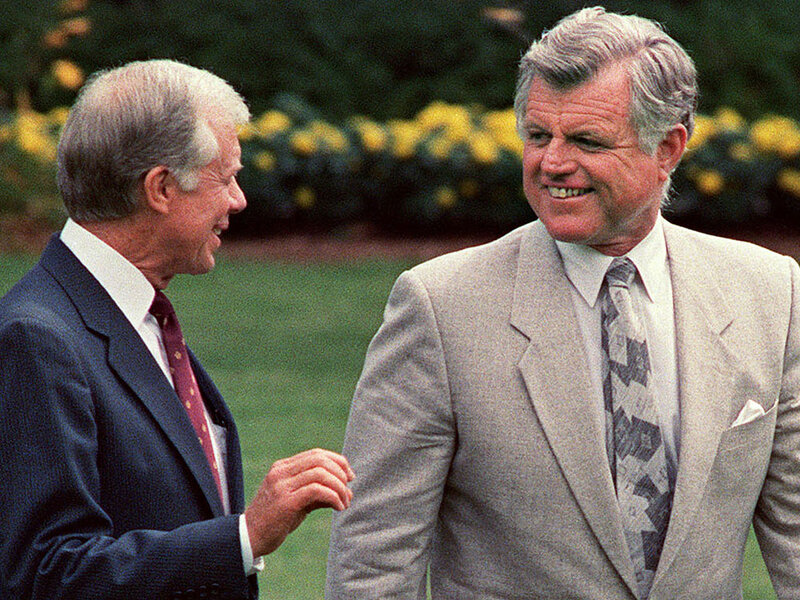 Today we find ourselves at the beginning of the 2020 presidential campaign even though the Iowa caucuses are eleven months away.  It seems that each day another Democrat announces their candidacy, and President Trump does what President Trump does. Talking heads on cable news programs ask each candidate why they are running and what sets them apart from the competition.  For me, it brings back memories of watching a 60 Minutes program in 1980 where Roger Mudd interviewed Ted Kennedy and asked him why he was challenging President Carter for their parties’ nomination.  Kennedy’s response went along way in destroying his candidacy as his rambling response lacked coherence, and in no way answered the question, leaving the American electorate in the dark as to why he was running.

At a time when the Democratic Party seems split between its progressive and moderate wings it would be a useful exercise to examine a similar split that played out during 1980 election campaign.  Jon Ward’s new book, CAMELOT’S END: KENNEDY VERSUS CARTER AND THE FIGHT THAT BROKE THE DEMOCRATIC PARTY successfully takes up the task and provides numerous insights into the politics of seeking the presidency considering today’s budding Democratic Party fissures.  One could also make a similar argument as the more establishment wing of the Republican Party appears to be growing tired of threats, government shut downs, “wall” politics for the base, that even President Trump might be challenged during the primary season for his parties’ nomination. 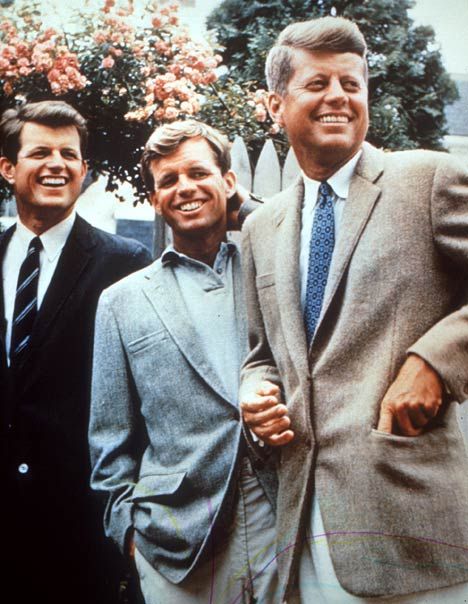 (The Kennedy brothers…the legacy Ted Kennedy had to cope with)

Ward’s book is in large part a dual biography of President Carter and Senator Kennedy tracing their personal roots from their upbringing, their political careers, as well as their distaste for each other.  The scope of Ward’s narrative encompasses the politics of the south that Carter emerged from, in addition to the Kennedy legacy that Senator Kennedy had to cope with his entire career.  Ward raises important questions that effected the course of the Democratic Party after the 1980 election that elevated Ronald Reagan to the presidency, as well as the country at large.  Ward explores why Kennedy challenged Carter’s re-nomination, and what impact that challenge had for American political history.  Further, the author contemplates how Kennedy’s challenge impacted the two men on a personal level.

Ward argues that in part Kennedy was driven by the cost and state of health care in America in the 1970s.  A witness to one family health crisis to another; the death of two brothers and a sister, and his son Ted Jr.’s battle with cancer, apart from his own surviving a plane crash that immobilized him for six months, the Senator sincerely believed it was not fair that a rich family like the Kennedy’s could afford the medical bills from such tragedies, while most American families could not.  Secondly, Kennedy opposed Carter’s fiscal conservatism that produced budget cuts to basic social programs.  For the senator, “sometimes a party must sail against the wind.”  Further, 1979 was a terrible year for President Carter.  The Camp David Accords seemed to be unraveling, unemployment remained high, inflation was rising, gas prices were increasing, and events in Iran led to the overthrow of the Shah and the taking of American hostages.  For Kennedy and establishment types within the Democratic Party, the president with a 37% approval rating was so weak he could be defeated.  With the scandal involving his Director of Management and Budget Bert Lance, and Carter’s “Malaise Speech,” a vacuum seemed to appear that could be filled.   Finally,  Kennedy would seek the presidency that seemed to be his birthright, hoping that Chappaquiddick had receded far enough into the background of the American electorate’s collective memory.

Carter was a very driven man.  Ward states that he appeared to be a soft-spoken individual who had evangelical glow about him,  however, inside he was very competitive and was made up a steely disposition that hated to lose or admit he was wrong.  In addition to the persona he presented Carter viewed politics through a Niebuhrian lens, combining a belief in his divine calling, juxtaposed with a competitive politician.  Peter Bourne, one of his advisors and a biographer has written, “increasingly be conceptualized politics as a vehicle for advancing God’s kingdom on earth by alleviating human suffering and despair on a scale that infinitely magnified what one individual could do alone,” that individual was Jimmy Carter.

Ward argues that the turning point in the relationship between the two men occurred in May 1974 at the Law School Day speeches at the University of Georgia where both men where scheduled to speak.  Kennedy gave a traditional democratic values speech, but Carter who had decided to run for president resented Kennedy’s presence and as Governor of Georgia treated him rather shabbily that day.  Carter believed that Kennedy was pushing him around and he would not tolerate it.  Ward goes on to describe Carter’s successful race for the presidency in 1976 in detail and accurately points out that it was clear that the seeds for his 1980 defeat were already being planted. 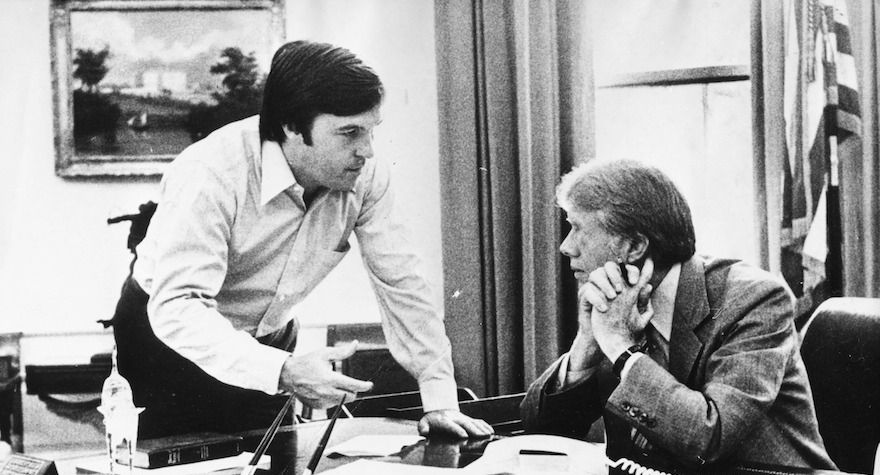 Carter and his people believed that they were not beholden to the Democratic Party establishment and Messrs. Jordan, Powell, Lance and others knew what was best.  Further, Carter alienated the journalistic community with his “refusal to give a plain answer to a plain question,” converting every act into a political morality play.  Carter’s insular group played hard in their personal lives stretching certain boundaries which conflicted to the holier than thou attitude that Carter preached to the press.

Ward dissects the 1980 race, and the book moves smoothly, but does not neglect scholarship relying on secondary works, memoirs, and numerous interviews.  Carter and Kennedy’s complex personalities are fully explored, including what causes drove them, and what they were most passionate about.

The events of 1980 had important implications for American politics for decades to come.  First, Kennedy was able to remove “presidential” fever from his system and go on to serve in the Senate for 47 years and become one of the most prolific legislators in American history.  Second, it launched the most successful post-presidency in American history as President Carter through the work of the Carter Center and other organizations has impacted world peace, helped cure disease, and reduce poverty, programs that continue to this day.  Lastly, With Carter’s defeat, Ward correctly argues that the coalition that Democrats relied upon since the election of Franklin D. Roosevelt in 1932 had splintered apart.  Reagan was able to split the combination of “union members and ethnics in the big cities, poor rural voters, racial minorities, Catholics, and the South” that had formed the Democratic Party voting blocs.  This coalition was fractured so badly that it has not and may never be put back again.  This chasm in Democratic party politics is ongoing and it will be interesting how it plays out in the coming presidential election. 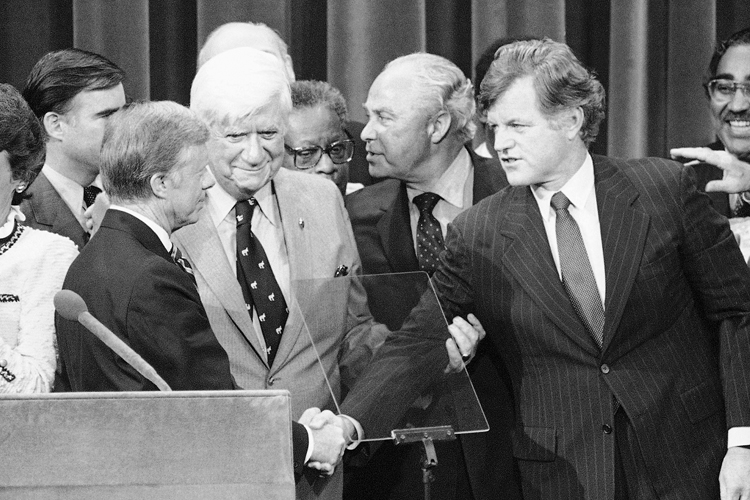 (Senator Ted Kennedy’s snub of President Jimmy Carter at Madison Square Garden, NY after Carter was renominated by the Democratic Party in August, 1980)